Even as San Francisco bans plastic straws in an effort to clean up the city, the streets are now reportedly littered with plastic caps from free syringes.

The orange plastic caps come from the free hypodermic needles that officials hand out to prevent diseases spreading among drug users. The city hands out an estimated 400,000 syringes each month for drug users, but has little control on how these needles are disposed of. The San Francisco Chronicle previously reported more than 154,000 needles end up in the streets, sidewalks, parks and playgrounds.

Meanwhile, leaders in the California city are hoping to prevent plastic straws from washing up in the San Francisco Bay. The city unanimously approved in July a plan to ban plastic straws and stirrers, as well as food containers made with fluorinated chemicals. Items such as condiment packets and napkins will be given out at bars and restaurants upon request. 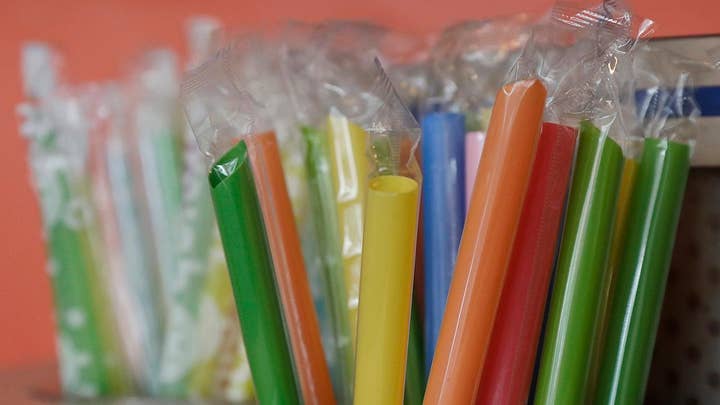 OPINION: IN SILLY SAN FRANCISCO DISEASE-RIDDEN NEEDLES ARE A-OK BUT A PLASTIC COCKTAIL STIRRER WILL SOON BE ILLEGAL

But these days, the orange plastic syringe caps are freely found scattered on streets and sidewalks, the Washington Post reported.

“Napkins, straws, and bags are available upon request,” sandwich shop Sentinel write on a menu footnote. “You can still get needles for free though. Welcome to SF.”

San Francisco Mayor London Breed told the newspaper that she wants residents and visitors to feel the city is “so clean.”

“I want people to walk around this city and think, ‘Wow, it’s so clean here,’” Breed said. “I want people just hanging out in front of where they live and enjoying the weather, people of all races, able to live in dignity because they have a home and are able to make ends meet.”

Breed said implementing the plastic straw ban is addressing a future problem, while working to clean the streets of items such as human feces, a Public Works crew dubbed the “poop patrol,” is addressing a current issue.