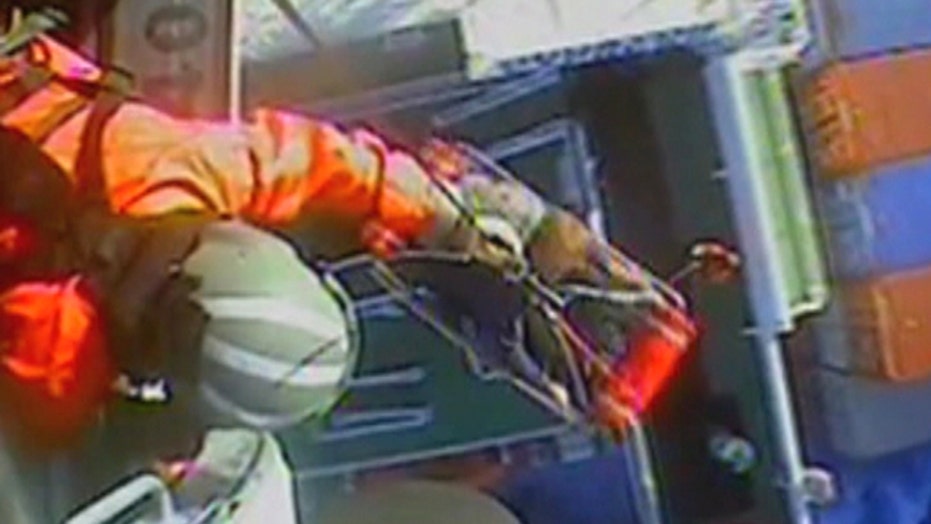 A 37-year-old South Carolina man was rescued Thursday after spending more than two months alone in a sailboat at sea, living on fish and rainwater, the U.S. Coast Guard said.

The crew of the Houston Express, a German-flagged ship, reported to the Coast Guard that they found Louis Jordan and his sailboat Angel around 1:30 p.m. Thursday, approximately 200 miles east of Cape Hatteras N.C.

A Coast Guard helicopter flew out to the Express and took him to a Norfolk, Va. hospital, where he was treated for an injured shoulder, The News & Observer reported.

“From what he told us on the phone, he was catching fish and collecting rain water and drinking it,” Coast Guard spokeswoman Lt. Krystyn Pecora told the paper.

"I'm so glad you're alive," Frank Jordan, Louis' father, told him in a phone call Thursday, according to audio released by the Coast Guard. "We prayed, and prayed, and hoped you were still alive."

"I thought I lost you," the emotional dad added.

Jordan had been living on his docked sailboat at the Bucksport Plantation Marina in Conway, S.C., until January, when he told his family he was "going into the open water to sail and do some fishing," said his mother, Norma Davis, of Jacksonville, N.C. The family had not heard from him since, she said.

"We expected him to come back and he did not return," Davis said in a telephone interview. "We knew something happened. To us it's just a miracle. We're just so thrilled that he was found alive."

Davis said Jordan's father, her ex-husband Frank Jordan, spoke to their son after he was recovered by the Coast Guard and that in addition to injuring his shoulder, he was dehydrated.

"It's amazing," she said. "It's been very difficult not knowing anything and I just feel like all of our prayers have come true. They've been answered."

Jordan had spent months sanding and painting his docked 1950s-era, single-masted sailboat in Conway, where marina manager Jeff Weeks said he saw him nearly every day. Jordan was the only resident in a section of about 20 boats docked behind a coded security gate, Weeks said.

"You'll probably never meet a nicer guy," Weeks said. "He is a quiet gentleman that most of the time keeps to himself. He's polite. I would describe him as a gentle giant:" measuring 6-foot-2 and weighing 230 pounds.

Jordan appeared to be knowledgeable about wild fruits and mushrooms and fished for his meals in inland waterways, Weeks said. But his January trip may have been his first time sailing in the open ocean.

"He might sail up and down the Intercoastal Waterway, but he didn't have the experience he needed to go out into the ocean," Weeks said.

Records show that Louis Jordan sailed out of the marina in Conway, on Jan. 23, aboard the sailboat Angel, said Marilyn Fajardo, a spokeswoman for the Coast Guard's 7th District.

Fajardo said the Coast Guard in Miami was notified by Frank Jordan on Jan. 29 that he hadn't seen or heard from his son in a week. One week later, Davis confirmed their son was still missing.

Fajardo said alerts were issued from New Jersey to Miami to be on the lookout for Jordan and his sailboat. Officials also searched financial data to determine whether Jordan could have come ashore without being noticed, but found no indication that he had, she said.

A search was begun on Feb. 8, but Fajardo said the Coast Guard abandoned its efforts after 10 days. Despite reports from other sailors claiming to have seen Jordan's sailboat, none of the sightings were confirmed and the case was suspended.

The Coast Guard said Jordan didn't file a "float plan," the nautical equivalent of a flight plan, to determine his route or destination, and Fajardo said there wasn't enough information to narrow down his whereabouts.

Davis said she is looking forward to celebrating her son's return.

"We do plan on having a wonderful Easter celebration with family and I can't wait to get him back," she said.