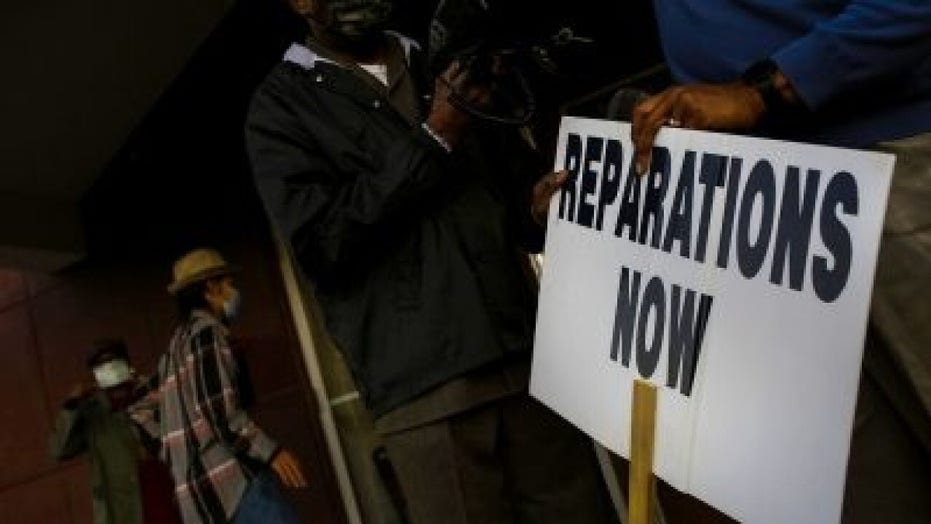 Reparations legislation advocates can't say who's eligible, how to pay for program

Advocates for slavery reparations legislation acknowledge they do not know who should be eligible for compensation or how it would be financed, leave details to government commission

Three advocates for slavery reparations legislation acknowledged that they do not know who should be eligible or how to finance compensation, with one supporter comparing American slavery reparations to those paid out by Germany after the Holocaust in World War II.

In separate sit-down interviews with Fox News, Del. Eleanor Holmes Norton, D-D.C.; Wanika Fisher, a Maryland General Assembly delegate representing Prince George’s County; and Nkechi Taifa, a member of the National African-American Reparations Commission, all voiced support for legislation to establish a commission to study reparations. But they offered few specifics when pressed on how they would implement such a compensation program.

Reparations are an "attempt to compensate for years of slavery, which put African Americans behind in wealth, education and almost everything else that White Americans experienced when they came to this country simply for being White," Norton told Fox News.

Norton co-sponsored H.R. 40, a federal bill that would establish a commission to study reparations but includes limited details.

"No one knows off the top of their head who would be eligible and why," Norton continued. "And no one knows whether reparations is the appropriate remedy. That’s what you need a commission for."

Taifa, who has been active in the reparations advocacy community for decades, said "the privilege that White people in [America] enjoy is called ‘White skin privilege'," and that White Americans have benefitted from "a state and a social structure that is governed by White supremacy."

She also agreed that a federal commission should decide reparations specifics.

Fisher, who also voiced support for H.R. 40, introduced her own bill in the state assembly that relies on a commission to determine specifics.

"The bill in Maryland would set up a commission to not just study it, but it's to actually come up with the way reparations would look and work in Maryland and to figure out who should sit on that board to actually then execute reparations to descendants of Maryland slaves," said Fisher, who was elected to the General Assembly in 2018.

"There’s obviously direct money payment – would be payment for basically lost wages and the fact that your descendants did work and were never paid and were obviously enslaved," Fisher told Fox News. Fisher said other options could include "free tuition" and "the ability to take out loans without having to put down any sort of deposit or down payment."

But Taifa said no amount of compensation can make up for the damages caused by slavery.

"There’s no question that Whites in this country enjoy the benefits of over 400 years of unjust enrichment," Taifa said. "No amount of monetary damages could fully compensate for the atrocities of the enslavement era and everything that’s happened since then."

Americans who believe they shouldn't be forced to pay for reparations because their ancestors either didn't own slaves or weren't in the U.S. during slavery should look to post-World War II Germany, Fisher suggested.

"When I look at Germany in their program, when it comes to the Holocaust there, there are tons of Germans that didn't do anything wrong to Jews that weren't, you know, Nazi sympathizers, weren't part of that, but they're paying into it and the German government to make things right," Fisher told Fox News.

Norton, who has served as Washington, D.C.’s lone delegate since 1991, said she supports funding reparations with taxpayer money.

"I would be for the money coming out of the Treasury, where everyone has been taxed, from corporations to individuals," Norton told Fox News.

But, not all Americans agree reparations are the best solution. Only 28% of White Americans support reparations, an April UMass/WCVB poll found.

"I don't think you're going to get White Americans to support reparations until we get this commission set up and people can find out what it's all about," Norton said of the polling during her interview with Fox News.

Congress has previously approved financial payments for past wrongdoings perpetrated by the U.S. government. President Ronald Reagan signed the Civil Liberties Act in 1988, which gave reparations to Japanese Americans held in internment camps during World War II at the direction of President Franklin D. Roosevelt.

Fisher hinted that reparations, if approved, could be paid out for years to come.

"I think to heal what has gone on for slavery, Jim Crow, redlining, all of that, it's not going to be a year. I think it's going to be a long-term process because the damage was long-term."