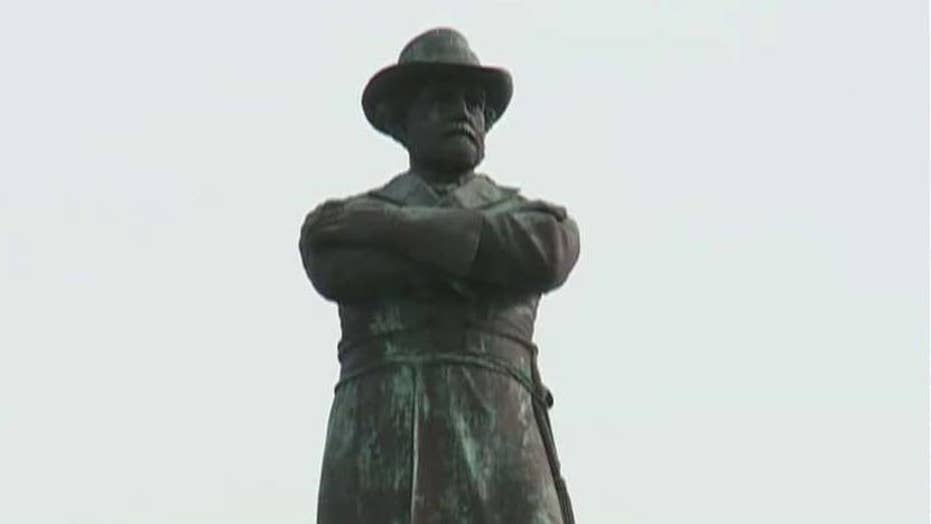 Backlash against a plan to remove prominent Confederate monuments in New Orleans has been tinged by death threats, intimidation and even what may have been the torching of a contractor's Lamborghini.

For now, at least, things have gotten so nasty the city hasn't found a contractor willing to bear the risk of tearing down the monuments. The city doesn't have its own equipment to move them and is now in talks to find a company, even discussing doing the work at night to avoid further tumult.

Initially, it appeared the monuments would be removed quickly after the majority black City Council on Dec. 17 voted 6-1 to approve the mayor's plan to take them down. The monuments, including towering figures of Gens. Robert E. Lee and P.G.T. Beauregard, have long been viewed by many here as symbols of racism and white supremacy.

The backlash is not surprising to Bill Quigley, a Loyola University law professor and longtime civil rights activist in New Orleans who's worked on behalf of a group demanding the monuments come down.

The South has seen such resistance before, during fights over school integration and efforts in the early 1990s to racially integrate Carnival parades in New Orleans.

An unidentified participant holds a sign during a December rally led by the Take 'em Down Coalition, as confederate heritage supporters bear confederate flags nearby in front of City Hall in New Orleans. (AP Photo/Gerald Herbert, File)

"Fighting in the courts, fighting in the legislature, anonymous intimidation," Quigley said. "These are from the same deck of cards that are used to stop all social change."

For all its reputation as a party city of fun and frolic, New Orleans is no stranger to social change and the tensions that come with it. It was the site of an early attempt to challenge racial segregation laws in the Plessy vs. Ferguson case and home to then-6-year-old Ruby Bridges whose battle to integrate her elementary school was immortalized in a Norman Rockwell painting.

New Orleans is a majority African-American city although the number of black residents has fallen since 2005's Hurricane Katrina drove many people from the city. Mayor Mitch Landrieu, who proposed the monuments' removal, rode to victory twice with overwhelming support from the city's black residents.

Nationally, the debate over Confederate symbols has become heated since nine parishioners were killed at a black church in South Carolina in June. South Carolina removed the Confederate flag from its statehouse grounds in the weeks after, and several Southern cities have since considered removing monuments.

"There is no doubt that there is a huge amount of rage over the attack on Confederate symbols," said Mark Potok with the Southern Poverty Law Center, an Alabama-based group that tracks extremist activity.

His group counted about 360 pro-Confederate battle flag rallies across the nation in the six months after the church shootings. Such rallies were rare before then, he said.

In early January, as it beat back legal challenges seeking to stop the removal, the city hired a contractor to remove the monuments.

But H&O Investments LLC. of Baton Rouge soon pulled out of the job, citing death threats, "unkindly name-calling," outrage on social media and the threat of other businesses canceling contracts.

One day, several protesters came while H&O workers took measurements. Some of the protesters wore materials "with affiliation to white supremacy groups," said Roy Maughan Jr., a lawyer for the contractor.

That same day, Maughan said, "a specific articulated threat" was phoned into city authorities warning workers at the monuments to leave for their safety. On Jan. 12, H&O sent the city a letter saying it was dropping out.

Then, on Jan. 19, a Lamborghini belonging to the owner of H&O Investments was set on fire. The sports car was parked outside his office near Baton Rouge, Maughan said.

A national rental crane company the city had hoped to hire also refused to be involved.

The FBI and local fire investigators declined to comment. No arrests have been made.

After H&O withdrew, the city opened a public bid process to find a new contractor -- and things got messy again.

When the names of companies interested in the work turned up on a city website, businesses were reportedly slammed with emails and telephone calls denouncing their involvement. The protest was organized at least in part by Save Our Circle, a group touting thousands of supporters who want a massive monument to Lee in Lee Circle preserved in the spot where it has stood since 1884.

The city closed public viewing to the bidding process and has met with contractors without disclosing their names. The mayor declined requests for an interview.

Michel-Antoine Goitia-Nicolas said his reasons for supporting boycotts, making calls and joining protests on behalf of the monuments are personal: He traces his ancestry to Beauregard, a Louisiana native who led Rebel troops at the opening of the Civil War. A prominent equestrian statue of Beauregard at the entrance to City Park is slated to be taken down.

"It's totally divided this city," Goitia-Nicolas said of the city's plans.

Standing next to the Beauregard statue, Goitia-Nicolas said he was willing to chain himself to statues to stop the removal.

"Our lesson in history is that when we tear down the monuments of the past we rebuild the errors of our past," he said. He said he was proud of Beauregard, who he said "never owned slaves."

Just this month, a state lawmaker began pushing a bill meant to save the monuments. Legal challenges, too, are on appeal.

"With this city, the way things go, it might not come down," Lisa Huber, a 39-year-old greenhouse gardener, said as she pondered the statue of Lee atop a 60-foot-high marble column, standing in his Confederate uniform with his arms crossed, staring down the North.

"I think it should come down, just because of the symbolism behind it."