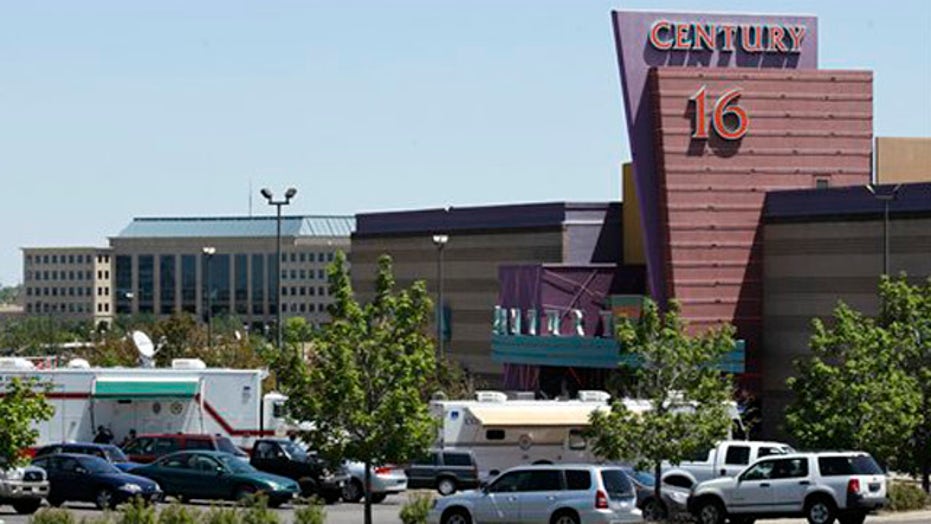 CENTENNIAL, Colo. – Relatives of those killed at a Colorado movie theater rejected an invitation Wednesday to attend its planned reopening, calling it a "disgusting offer" that came at a terrible time -- right after the first Christmas without their loved ones.

The parents, grandparents, cousins and widow of nine of the 12 people killed in the July shooting said they were asked to attend an "evening of remembrance" followed by a movie when the Aurora theater reopens on Jan. 17. They released a letter sent to the theater's owner, Cinemark, in which they criticized the Plano, Texas-based company for not previously reaching out to them to offer condolences and refusing to meet with them without lawyers.

"Our family members will never be on this earth with us again and a movie ticket and some token words from people who didn't care enough to reach out to us, nor respond when we reached out to them to talk, is appalling," the letter said.

The company announced last month that it would reopen the theater on Jan. 17 and invite people affected by the attack and other guests, a move that Aurora officials said has strong support in the community. Gov. John Hickenlooper plans to attend.

The Aurora Sentinel reported that plans filed with the city call for turning the theater into one of the company's "extreme digital cinema" sites that feature massive screens. It's not clear from the plans whether there will be a memorial to the victims.

The invitation was emailed to families by the Colorado Organization for Victim Assistance, which said the offer was being sent on behalf of Cinemark.

It arrived two days after Christmas as Sandy and Lonnie Phillips, the mother and stepfather of Jessica Ghawi, one of the 12 people killed, were housesitting in Denver.

They had left their home in San Antonio, Texas, on the advice of their grief counselor to avoid being where they typically would have celebrated Christmas with Jessica. Sandy Phillips said they picked Denver on purpose because her daughter, a 24-year-old aspiring sportscaster, had been happy there.

The Phillipses said the invitation could be a public relations ploy to help show the public that some victims or their families are willing to attend the theater reopening.

"It was a killing field. It was a place of carnage and they've not once told us what their plans are for the theater other than that they're reopening it," said Sandy Phillips. She would like the theater where her daughter was killed to be demolished, though she acknowledged that it was unrealistic to expect Cinemark to give up the rest of the building.

The families of some victims have sued Cinemark. The father of the youngest person killed in the shooting, 6-year-old Veronica Moser-Sullivan, is among them. He didn't sign the letter but the girl's grandparents did. The Phillipses have not decided whether they will sue.

Also Wednesday, prosecutors and defense lawyers said they are ready for a crucial hearing next week in which prosecutors will outline their case against James Holmes, who is charged with killing 12 people and wounding 70 during the midnight showing of the Batman movie "The Dark Knight Rises" on July 20.

It starts Monday and is scheduled to run all week. At its conclusion, state District Judge William B. Sylvester will decide if the evidence is sufficient to put Holmes on trial.

The defense could waive the hearing but legal analysts said defense lawyers sometimes go ahead with the hearing to get an idea of how strong the prosecution's case is.

Laurie Levenson, a professor at Loyola Law School in Los Angeles and a former federal prosecutor, said preliminary hearings sometimes set the stage for a plea agreement as each side gets to assess the strength of the other.

Holmes is charged with multiple counts of first-degree murder and attempted murder and hasn't been asked to enter a plea yet. His lawyers have said he suffers from mental illness.

Next week's hearing will give the public its first officially sanctioned look at much of the evidence against Holmes.

A judge imposed a gag order shortly after Holmes' arrest barring attorneys and investigators from speaking publicly about the case, and many documents have been sealed.

The University of Colorado, where Holmes was enrolled in a Ph. D. neuroscience program, has also been tight-lipped about the case. Investigators said he began stockpiling firearms and ammunition while taking classes in the spring.

In June, he made threats to a professor and on June 10 filed withdrawal papers after failing a year-end exam, prosecutors said. The next day he saw his school psychiatrist who tried to report him to a campus security committee, according to Holmes' lawyers.