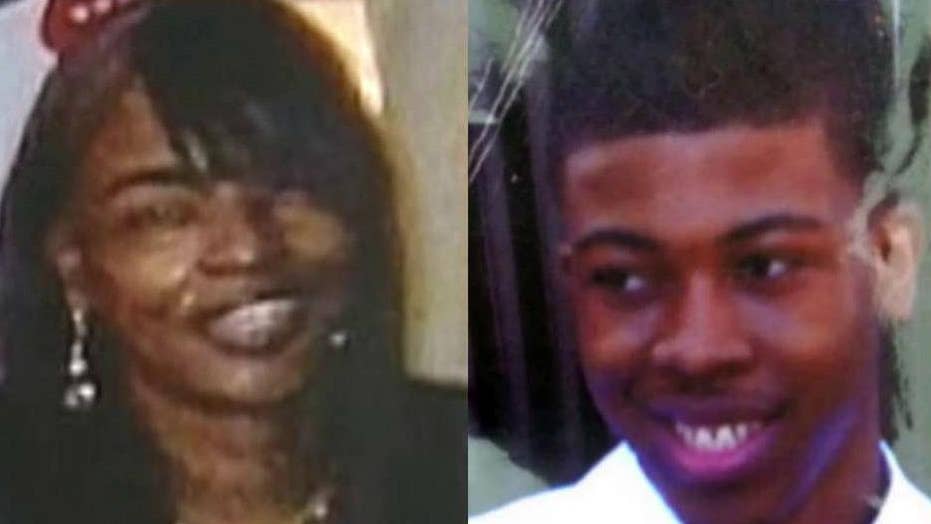 55-year-old neighbor was hit, killed by accident when officers were shooting at suspect

Quintonio LeGrier, 19, was killed early Saturday by police responding to a domestic disturbance at an apartment on the city's West Side, along with downstairs neighbor Bettie Jones, 55. Police said Jones was hit accidentally by the gunfire.

Both were black. The shootings came amid scrutiny of police after a series of deaths of African-Americans at the hands of officers across the country gave rise to the Black Lives Matter movement.

LeGrier's mother, Janet Cooksey, during a vigil Sunday placed candles on the porch of the two-story home, where Jones lived in a ground-floor apartment and LeGrier's father in an upstairs unit. On either side of the door, Post-It notes indicated where two bullets hit siding on the house.

"I used to watch the news daily and I would grieve for other mothers, other family members, and now today I'm grieving myself," Cooksey said at a news conference outside the residence earlier Sunday. She wore a black shirt with Mayor Rahm Emanuel's image on it and the phrase "Rahm Failed Us."

Others who spoke said police should have used stun guns or other nonlethal methods if they felt they needed to subdue LeGrier, a college student home for holiday break.

"Why do (police) have to shoot first and ask questions later?" Jacqueline Walker, a friend of Jones, asked. "It's ridiculous."

Some who showed up to support the families of Jones and LeGrier questioned how such shootings could occur while federal investigators are focusing on the Chicago Police Department, including a look at whether there are patterns of racial disparity in the use of force.

"Something is seriously wrong," said the Rev. Marshall E. Hatch, who attended the vigil. "How in the middle of all this scrutiny, (can you) have a trigger-happy policeman?"

The Police Department said in a statement Saturday that officers who responded to a 911 call "were confronted by a combative subject resulting in the discharging of the officer's weapon."

"The 55-year-old female victim was accidentally struck and tragically killed," according to the statement, which extended "deepest condolences to the victim's family and friends."

Jones, a mother of five known for working with community groups committed to reducing violence, had hosted family on Christmas Day, friends and relatives said.

Family spokesman Eric Russell said Jones' many grandchildren had hoped to thank her for their Christmas gifts over the weekend. "They were denied that opportunity," he said.

Jones and LeGrier were pronounced dead at hospitals, according to the Cook County medical examiner's office.

Police did not disclose the race of the officer or officers, saying only that those involved will be placed on administrative duties. It isn't clear how many officers responded, how many used their firearms and how many times LeGrier and Jones were struck.

LeGrier's cousin, Albert Person, said LeGrier's father had invited his son to a holiday gathering at another home on Christmas. Person said the son's refusal to go caused friction, but didn't lead to a serious argument.

"What family doesn't fight on the holidays?" he said.

Antonio LeGrier told the Chicago Sun-Times his son appeared to be a "little agitated" when the father returned to the apartment. Around 4:15 a.m., the elder LeGrier said he heard loud banging on his locked bedroom door and that his son said, "You're not going to scare me." He said his son tried to bust the door open, but he kept him from doing so and called police. He added that he called Jones on the floor below to say his son was a "little irate" and not to open the door unless police arrived.

He said Jones told him his son was outside with a baseball bat.

When police arrived, Antonio LeGrier said he heard Jones yell, "Whoa, whoa, whoa!" He said he heard gunshots as he made his way down from the second floor and saw his son and Jones lying in the foyer.

He told the newspaper his son had emotional problems after spending most of his childhood in foster care. LeGrier described him as a "whiz kid" on break from Northern Illinois University, where he majored in electrical engineering technology.

Cooksey denied that her son ever exhibited "combative behavior." She said he "might've been angry with his father and they might've got into it," but that he was not angry or violent.

It's not clear whether Jones tried to intervene before being shot or if she was hit by gunfire while answering the door.

Person said it would have been in Jones' character to attempt to help the young man if he were in peril.

Person and the Jones family lawyers, Larry R. Rogers Sr. and Sam Adam Jr., said it appeared that police shot at a distance.

Adam said police took the hard drive of a home-security camera from across the street, but it was unknown if it or other cameras in the neighborhood captured the shootings.

Emanuel's office said in a statement Saturday that IPRA would share its evidence with the county prosecutor's office.

"Anytime an officer uses force the public deserves answers, and regardless of the circumstances, we all grieve anytime there is a loss of life in our city," Emanuel said in the statement.

About 100 neighbors, activists, politicians and others attended the vigil responding to the killings of Jones and LeGrier. Someone held a sign that read, "Stop Killing Us," and several people chanted, "This is not an accident!"