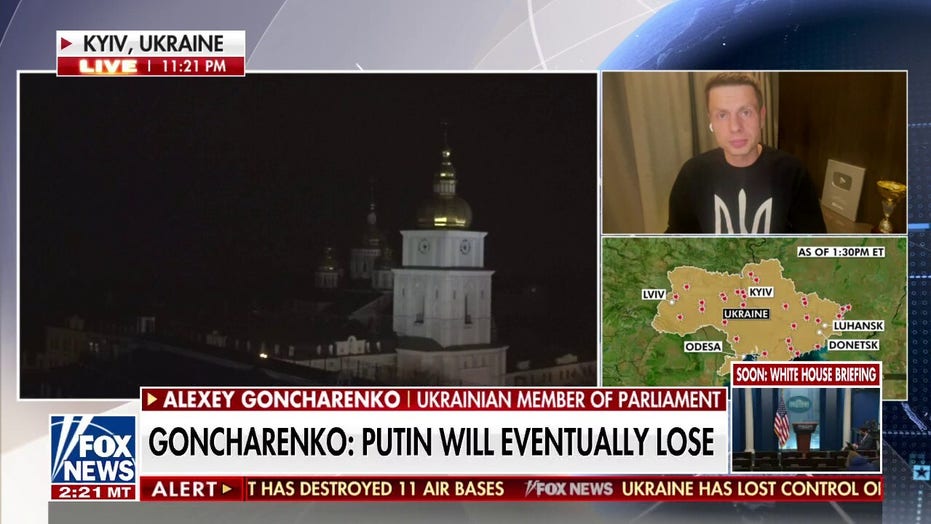 Alexey Goncharenko reveals the countries besides Ukraine that Putin is targeting on 'Your World.'

President Vladimir Putin may have overplayed his hand by invading Ukraine as opposition to the war grows in Russia, experts told Fox News Digital.

"This is a massive miscalculation," said University of Wisconsin-Madison Professor Yoshiko Herrera, who is an expert on U.S-Russian relations. "This action yesterday was just another level of crazy. It’s a ruination of Russia for decades, so damaging for Ukraine and so costly all around."

More than 1,700 demonstrators in Russia protesting the unprovoked attack on Ukraine have been arrested, according to OVD Info, a Russian human rights organization.

The demonstrations are especially noteworthy in a country that fiercely suppresses dissent, Herrera said.

"The people who are taking to the streets know that they will likely end up in jail," she told Fox News Digital. "My view is this is going to be an extremely unpopular war in Russia even for people who are pro-Putin."

Putin’s approval rating stood at 69% in January, but that number is misleading given that he has constrained alternative political choices, she said.

Historically, Russia and Ukraine don’t have a level of hostility that would justify this violent incursion. Ukraine has elected pro-Russian leaders, and the two countries consider themselves more like brothers than enemies, Herrera said.

"There is a lot of interethnic hospitality," the scholar explained. "Images of Ukrainian families, Ukrainians being killed, your average Russian family is not going to be okay with that."

Since the attack began Wednesday, more than 57 people have been killed and 169 wounded. In addition to sanctions, there is significant social fallout over the invasion, with Aeroflot Airlines banned from flying to the U.K., and the Union of European Football Associations pulling the Champions League final from Saint Petersburg.

Herrera said that Putin’s decision is even "more mind-boggling" considering he essentially had a victory after the incursion into the Donbas region, where separatists and Ukrainians have been fighting for eight years.

He recognized the so-called Donetsk and Luhansk People’s Republics on Monday and dispatched troops there that he euphemistically referred to as "peacekeepers."

"As of last week, he had already achieved a lot of his goals getting everyone to pause on letting Ukraine join NATO," said Herrera, referring to the U.S.-led NATO, an intergovernmental military alliance intended to guarantee its members’ security.

U.S. Army Gen. Jack Keane, who serves as chairman of the Institute for the Study of War, said Putin’s obvious objective is to take the Ukrainian capital of Kyiv and install a pro-Russian government.

Putin has said he does not want to occupy Ukraine but "demilitarize" it. The autocratic leader is uncomfortable bordering a democratic, Slavic nation that looks to the west and not Moscow, said Valery Dzutsati, an assistant professor at the University of Kansas and an expert on Russia.

"If Ukraine is a flourishing democracy, it is a very bad example for Russia," he said. Putin is threatened by social revolution, and Ukraine has a history of ousting unpopular regimes, he added.

There is also a large segment of the Russian population that is nostalgic for the USSR and will celebrate bringing Ukraine back into the fold of the Motherland — if it is done swiftly and with limited bloodshed, Dzutsati predicted.

Ukraine was one of the founding members of the USSR and gained its independence in 1991 when the Soviet Union fell.

But Dzutsati doesn’t think that Putin’s warmongering ambitions will stop at Ukraine’s borders.

"Let’s suppose Putin takes Ukraine very quickly and establishes control very quickly, in a matter of weeks, then he will move on," Dzutsati told Fox News Digital. "The next target will perhaps be one of the Baltic states."

Putin’s military campaign may not be as smooth as he expected.

"The Ukrainian army has become a much more formidable force, and there will be a lot of fighting and civil resistance," he said. "The people will not give in easily."

He added the only way for Putin to control Ukraine, a country of 40 million, is through "massive, Stalinesque repression."

"If Putin fails, if he is forced to retreat, then he is finished," Dzutsati predicted. "He will be deposed very quickly."