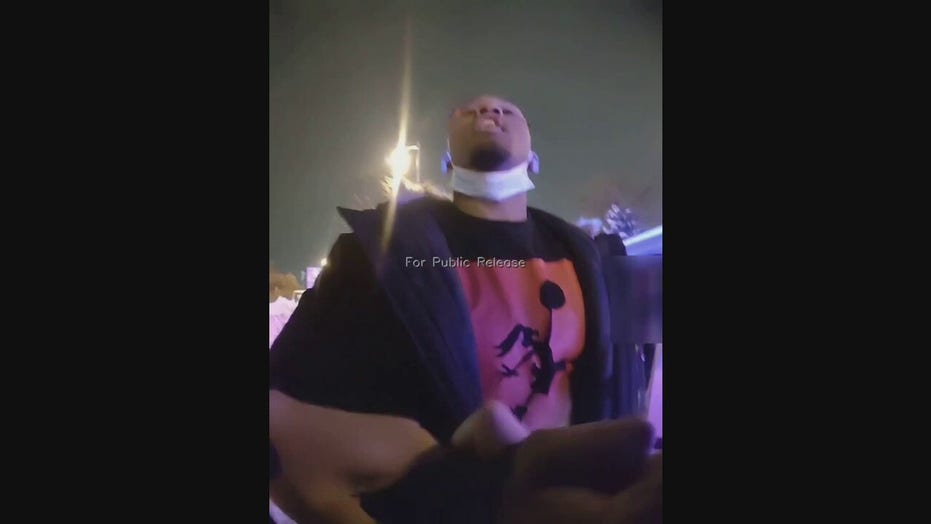 Purdue University has released body camera footage showing a campus police officer arresting a student on Feb. 4 in an incident that sparked outrage across social media after it happened.

Purdue University has released body camera footage showing a campus police officer arresting a student on Feb. 4 in an incident that sparked outrage across social media.

Student Adonis Tuggle posted an initial video of the incident taken by his girlfriend to Instagram in February showing Purdue University Campus Police (PUCP) Officer Jon Selke pinning Tuggle to the ground in a bank of snow while he and his girlfriend beg him to stop.

The university also released the 911 call that led to the arrest incident in which someone on campus reports "a couple…screaming really loud," with a male standing outside a car parked near a university building and a female sitting inside the car.

Purdue University has released body camera footage showing a campus police officer arresting a student on Feb. 4 in an incident that sparked outrage across social media after it happened. (Purdue University Campus Police)

The newly released footage from Selke's body camera shows the entire incident from the moment police arrive to the scene and the moment they leave. Tuggle can be heard telling the officer in the video that he has his girlfriend's phone and wallet because "she's not listening" to him, and he was "trying to get her attention."

"Alright, here's the deal. Go behind the car. I asked you nicely once," Selke says in the bleeped video obtained by Fox News Digital through a Freedom of Information Act (FOIA) request.

Things escalate quickly when the officer asks Tuggle to put his hands behind his back and says something to Tuggle's girlfriend that has been redacted. Tuggle then repeatedly tells the officer, "Don't talk to her like that," followed by, "Don't talk to me like that."

"I can't do anything," the girlfriend can be heard saying. "You're hurting him!"

Selke tells Tuggle to "stop resisting" after additional officers eventually arrive at the scene. Tuggle is on the ground for several minutes while police handcuff him before he is helped up off the ground.

The footage was released after a special prosecutor in the case decided not to pursue charges in the case. Purdue University President Mitch Daniels, as well as Tuggle, the Purdue Board of Trustees, the Purdue University Police Department, and Selke jointly reached an agreement to take steps to ensure a similar incident does not take place on campus again, according to a press release.

"First, we understand and respect the prosecutor’s decision and are glad for his forbearance in not proceeding with charges against Adonis. Notwithstanding the legal considerations, we believe this was an incident that escalated too quickly in the distinctive context of our campus environment," Purdue President Mitch Daniels said in a statement. "We recognize this is an outcome that no member of the Purdue community should expect in light of our high aspirations for community policing at Purdue, which have the primary aim of ensuring a safe and positive experience for our students on campus. "

The university president continued: "We deeply regret what happened, and we’re grateful for our community’s patience as we, alongside Adonis, Officer Jon Selke and their families, have worked to gain a better understanding of what occurred that night and a reconciliation among the parties to the incident."

"I apologize for the impact of my actions on the night of February 4, 2022," Selke said. "I have privately spoken with Adonis and his mother, Ms. Cornelia Dawson, to express my sincere apologies to them. I fully acknowledge how my actions and the images of this event have called into question the safety and belonging of Purdue’s Black community. I am very sorry for that."

Tuggle said he is "grateful" for the leadership at Purdue and the "support" he has received in the weeks since the incident.

"I recently had the opportunity to meet Officer Selke and learn more about his background and his family, and to understand his own personal history and service in the military and as a PUPD officer," he said. "We had a productive conversation, and I’m committed to working with him, the Purdue police, my fellow students, and the broader university community to forge a positive path forward."