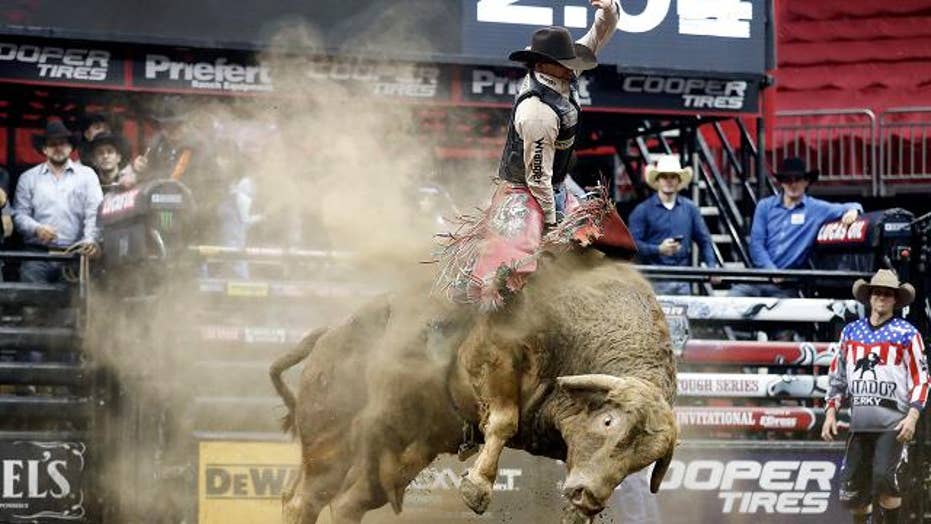 Mason Lowe — described as a beloved professional bull rider and a star in the sport — was competing in an event in Colorado on Tuesday night when he was knocked off a bull who then stomped on his chest, killing him, officials and witnesses said.

Lowe was attempting to get up when the hind left leg of the bull, named Hard Times, came down on his chest. Despite wearing a protective vest, he suffered a “massive chest injury that caused damage to his heart,” Professional Bull Riders Association officials said.

“Mason was pulled under his bull during the buck off and the bull’s hind left leg struck him in the chest,” PBR president Sean Gleason told FOX31. “The material inside is designed to disperse the weight. In this particular case, Mason took a shot that was -- that no vest probably would have helped.”

The 25-year-old was competing in the PBR Chute Out during the National Western Stock Show in Denver, Colo., a day before the bull riding finals were set to take place.

Raymond Lewis, who witnessed the fatal event, told KCNC-TV that Lowe was knocked off the bull “at the last second.”

“It looked like he had it handled,” Lewis recalled. “He got bucked off at the last second. “Everyone got quiet, knew it was pretty serious.”

Lewis said rodeo clowns got the bull away from Lowe, who stood up, “staggered toward the exit and collapsed down.”

Lowe's death is believed to be the first bull-riding death in the 119-year history of the stock show in Denver, FOX31 reported.

Fans returned to Denver Coliseum Wednesday night and paid tribute to Lowe, who was ranked 18th in bull riding in the world at the time of his death. The announcer began the night by saying, “It is with extremely heavy hearts that we share with you we have lost truly one of our own.”

A video played at the rodeo highlighted Lowe’s accomplishments as a professional bull rider over more than seven years, FOX31 reported.

“I cried because I’ve watched that young gentleman here,” Mary O’Dell told FOX31. “I really love the cowboys. They all could be great-grandchildren to me. He’s just such a sweetheart. It just broke my heart in half.”

"That's what you have to accept because it's not tiddlywinks or anything. It's a dangerous -- very dangerous sport. But the friends that you make and the places that you see and the satisfaction and the feeling of success you get after doing that, Mason got to feel that. And that feeling is something that you can't replace and a lot of people may never feel," Snyder said.

The National Western Stock Show and PBR set up a fundraiser to support Lowe’s wife and family.