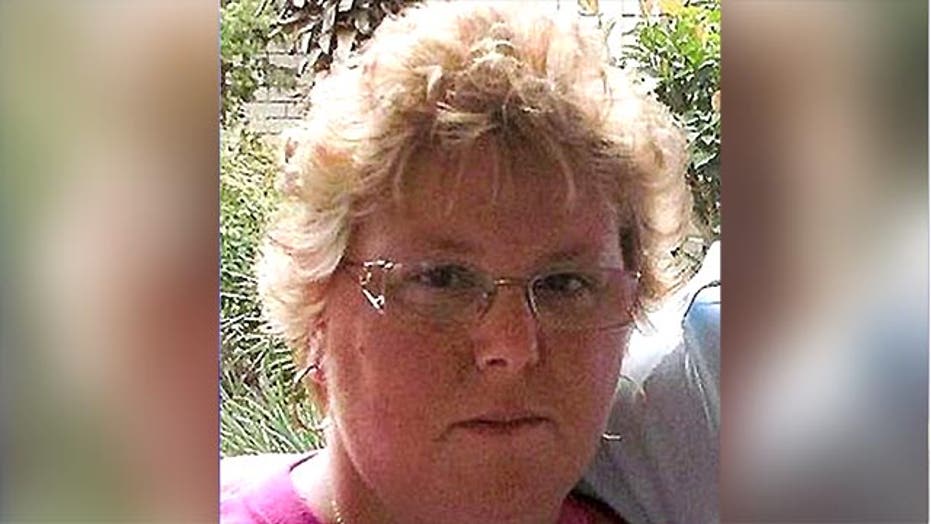 The female prison employee at the center of an investigation into the escape of two killers pleaded not guilty Friday night to helping them flee the maximum security facility.

Mitchell is accused of aiding in the escape of inmates David Sweat and Richard Matt from the Clinton Correctional Facility in upstate New York last week.

She entered the court room with her hands cuffed in front of her, clad jeans and a lime green top looking terrified. She did not speak. She was ordered held in jail on $100,000 cash bail or $200,000 bond on felony county and is due back in court Monday morning.

District Attorney Andrew Wylie said earlier Friday the contraband did not include the power tools used by the men as they cut holes in their cell walls and a steam pipe to escape through a manhole last weekend.

Wylie didn't elaborate on the charges Friday as more than 800 officers continued to search for the escapees, concentrating in a rural area around the prison in the Adirondacks near the Canadian border. Earlier residents reported seeing  tow men jumping a stone wall outside Dannemora.

Maj. Charles Guess of the New York State gave a stern warning to the convicts at an evening press conference,

"We're coming for you and will not stop until you are caught," he said.

He added that Mitchell's arrest represented "one large piece of the puzzle in our quest" to find the men.

Asked about any clues to the escapees' whereabouts, Guess said there was no "conclusive evidence" that either had left the area. None of the reports of possible sightings has been confirmed, he added.

"It's day six," he said, "and if they have not escaped the area, you've got to assume they're cold, wet, tired and hungry."

As to whether they split up, Guess said, "there's no reason to believe they're not together but we're planning for both eventualities."

Earlier, Wylie said Mitchell, a supervisor in the prison's tailoring shop, brought "contraband" into the prison but he declined to elaborate on what, specifically, she gave the men.

The Albany Times-Union reported late Thursday that Mitchell told New York State Police she gave Matt, 48, and Sweat, 34, access to a cell phone and smuggled tools into the prison.

A police source close to the investigation confirmed to Fox News Friday that Mitchell planned to provide a getaway car for the two convicted murderers but had a change of heart at the last minute. Mitchell instead checked herself into a hospital some 40 miles away from the prison, complaining of panic attacks, according to law enforcement.

Mitchell joined the prison staff in March of 2008 and earned $57,697 a year. She was suspended without pay, effective Friday.

Police, meanwhile, said Friday that two men believed to be the inmates were spotted jumping over a stone wall in the woods in Saranac, a few miles from the prison, the Buffalo News reported. According to the newspaper, a law enforcement officer said he believes he saw the two at 7:30 a.m. Friday and authorities converged on the area.

Colleen Cringle, who lives on Cringle road in Saranac, told the newspaper police were using her home as a staging area to search for the killers.

New York Gov. Andrew Cuomo has vowed that state law would come down hard on any prison system employee who crosses the line with inmates.

"If you do it, you will be convicted, and then you'll be on the other side of the prison that you've been policing, and that is not a pleasant place to be," Cuomo said. The governor also said investigators are "talking to several people who may have facilitated the escape."

The Times-Union also reported that Mitchell had been investigated in recent months by the state corrections department's inspector general after a fellow prison worker complained that she had gotten too close to Sweat and Matt. That investigation did not result in any discipline.

Prison employees and correction officers are prohibited from having relationships with inmates or performing favors for them.

Matt was serving 25 years to life for the 1997 kidnap, torture and hacksaw dismemberment of Matt's 76-year-old former boss, whose body was found in pieces in a river.

Matt and an accomplice stuffed William Rickerson in a car trunk in his pajamas and drove around with him for 27 hours because he wouldn't tell them the location of large sums of money he was believed to have.

According to testimony, Matt bent back the elderly man's fingers until they broke and later snapped Rickerson's neck with his bare hands.

After the killing, Matt fled to Mexico, where he killed a man outside a bar.

Sweat was doing life without parole for his part in the 2002 killing of sheriff's Deputy Kevin Tarsia, who was shot 15 times and run over after discovering Sweat and two accomplices transferring stolen guns between vehicles.