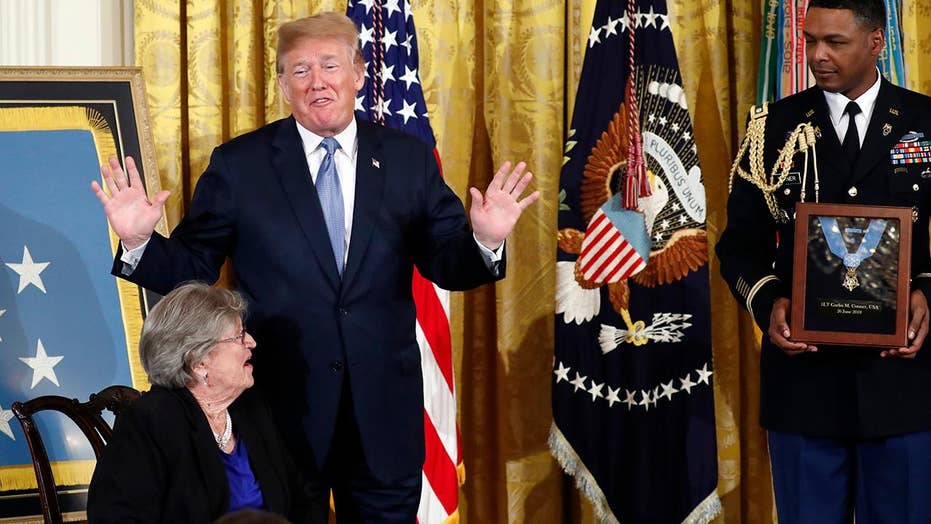 For Pauline Conner, Tuesday is a day she wasn’t sure would ever come.

The widow of 1st Lt. Garlin Murl Conner waged a 22-year campaign to get his Distinguished Service Cross – which he was awarded for his actions on Jan. 24, 1945 in France – upgraded to a Medal of Honor, as his World War II battalion commander had wanted back then.

“After all these years it really is and truly is an honor,” the 89-year-old widow said Monday at the Pentagon. “I had really and truly given up on it. I just didn’t think it would ever happen. But he has a [combat] record that speaks for itself. I don’t have to tell it.”

President Donald Trump awarded the nation’s highest military decoration to Pauline in a White House ceremony honoring a remarkable moment of heroism from Conner’s 28-month combat career, which took him to North Africa and Europe.

President Trump awarded the Medal of Honor to the widow of 1st Lt. Garlin Murl Conner, above, at the White House on Tuesday. (U.S. Army)

"Today we tell the story about an incredible hero," Trump said during the ceremony. "Although he died 20 years ago today he takes his rightful place in the eternal chronicle of American valor."

The Medal of Honor makes Conner the second-most decorated soldier of World War II, according to the Army, surpassed only by legendary 1st Lt. Audie Murphy.

As it turns out, the veteran’s upgrade needed eyewitness accounts, which were finally found by Kentucky Congressman Ed Whitfield, who sent a staff member to the National Archives where the necessary documentation was discovered.

His widow spoke about the toll his tour of duty, which included being wounded seven times, had on her husband – who she married at the age of 16.

“You know, in World War II and Korea, they didn't recognize PTSD like they did in Vietnam,” Pauline said at the Pentagon. “But I've always said if anybody ever had PTSD, he did. Because many of the times, he'd wake up in the night, you know, with nightmares. And after I would wake him up, and he would go outside, sit on the porch, smoke cigarettes for hours at a time.”

However, her husband still never spoke about what happened to him overseas.

On Jan. 24, 1945, Conner’s soldiers – 7th Infantry, 3rd Battalion – were facing a counterattack from 600 German troops armed with tank destroyers. Instead of retreating, he chose to run forward into enemy fire with a telephone in order to direct artillery fire in hopes of ending end the attack. He stayed in an irrigation ditch for three hours until the battle was won as swarms of German soldiers moved toward his battalion.

“He’d just come back from being wounded. He wasn't even supposed to be there,” said Erik Villard, digital military historian from the Army Center of Military. “But he came back to his unit and ran forward and volunteered the mission, and did what he did.”

“Today we pay tribute to this Kentucky farm boy who stared
down evil,” Trump said. "He was indeed a giant, larger than life, he will never ever be forgotten."

Majority Leader Mitch McConnell, Republican of Kentucky, spoke about Conner's sacrifice on the floor of the senate Tuesday

“I’m proud to congratulate Pauline and her family today. And I would like to thank her, for giving our nation the opportunity to salute First Lieutenant Garlin Murl Conner," McConnell said in a statement. "He embodied the highest values of our Commonwealth and our nation. But this humble man never called himself a hero. So, it’s incumbent upon us to do just that.”

Conner’s Army record during the war included four Silver Stars, French valor awards and three Purple Hearts. He earned the decorations in savage battles between October 1942 and March 1945 as his 3rd Infantry Division unit pushed from Morocco, across Tunisia into Italy, across France and into Germany.

“My husband was a very humble man, and I'm honored to represent him. It's—it's not about me; it's about him. And he was my hero. He was for 53 years, and he still is since he's been gone 20 years.