President Trump traveled to Dover Air Force Base in Delaware this morning to receive the bodies of four Americans slain in a suicide bombing in Syria on Wednesday.

U.S. Central Command said in a statement after the blast that two U.S. servicemembers, one Department of Defense civilian and one contractor had died, and another three Americans were injured. Operation Inherent Resolve, the U.S.-led coalition against ISIS, confirmed the fatalities and said that they were killed while on a routine patrol of the Northern city of Manbij, Syria.

The fourth was identified on Saturday as 27-year-old Ghadir Taher, an Arabic translator from East Point, Georgia. It is believed 16 people died in total.

Heading to the Air Force base Saturday morning, President Trump said he was going to meet with the families, something he said "might be the toughest thing I have to do as President."

The Islamic State took credit for the terror attack, saying that one of its members carried out a suicide mission and detonated his explosive vest. The attack comes just a few days after President Trump announced via Twitter on Sunday his plans to hit ISIS hard before beginning a "long overdue" removal of troops from Syria.

President Donald Trump salutes as a military honor guard carries the remains of Scott Wirtz, a civilian employee of the U.S. Defense Intelligence Agency killed along with three members of the U.S. military during a recent attack in Syria, past during a dignified transfer ceremony at Dover Air Force Base, in Dover, Delaware, U.S., January 19, 2019. REUTERS/Carlos Barria - RC18A626C300

“Starting the long overdue pullout from Syria while hitting the little remaining ISIS territorial caliphate hard, and from many directions. Will attack [ISIS] again from existing nearby base if it reforms,” he wrote.

US SERVICEMEMBERS KILLED IN SUICIDE BLAST IN SYRIA, OFFICIALS SAY

Army Chief Warrant Officer 2 Jonathan R. Farmer, 37, of Boynton Beach, Florida was killed in the suicide bombing in Syria on Wednesday. He is survived by wife, four children and parents

Shannon M. Kent, a chief crypotologic technician, is also survived by her spouse and two children. She enlisted in the Navy in 2003, following in the law enforcement footsteps of her father, who was the third-highest ranking officer in the New York State Police.

New York Governor Andrew Cuomo ordered that flags state-wide were lowered to half mast in honor of Kent, according to New York Daily News.

"We owe her our eternal gratitude for her selfless dedication and sacrifice," Cuomo said, according to the Navy Times.

Scott A. Wirtz, 42, had a large extended family in his hometown of St. Louis, Missouri. He has been a member of the U.S. Navy for eight years, where he worked as a Navy SEAL.

Following the deadly attack on Wednesday, Vice President Pence issued a statement on behalf of himself and President Trump

"President Trump and I condemn the terrorist attack in Syria that claimed American lives and our hearts are with the loved ones of the fallen. We honor their memory and we will never forget their service and sacrifice," the statement read.

"Thanks to the courage of our Armed Forces, we have crushed the ISIS caliphate and devastated its capabilities. As we begin to bring our troops home, the American people can be assured, for the sake of our soldiers, their families, and our nation, we will never allow the remnants of ISIS to reestablish their evil and murderous caliphate – not now, not ever," it continued. 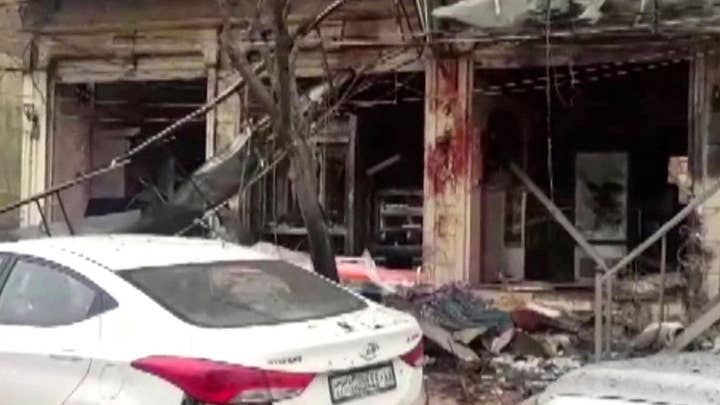 "Allow me to extend on behalf of the Department of Defense our thoughts and prayers to the families and team members of those killed and wounded during today’s attack in Manbij," Shanahan said. "Our fight against terrorism is ongoing and we will remain vigilant and committed to its destruction."

"Today is a stark reminder of the dangerous missions our men and women in uniform perform on our behalf each and every day," he said.