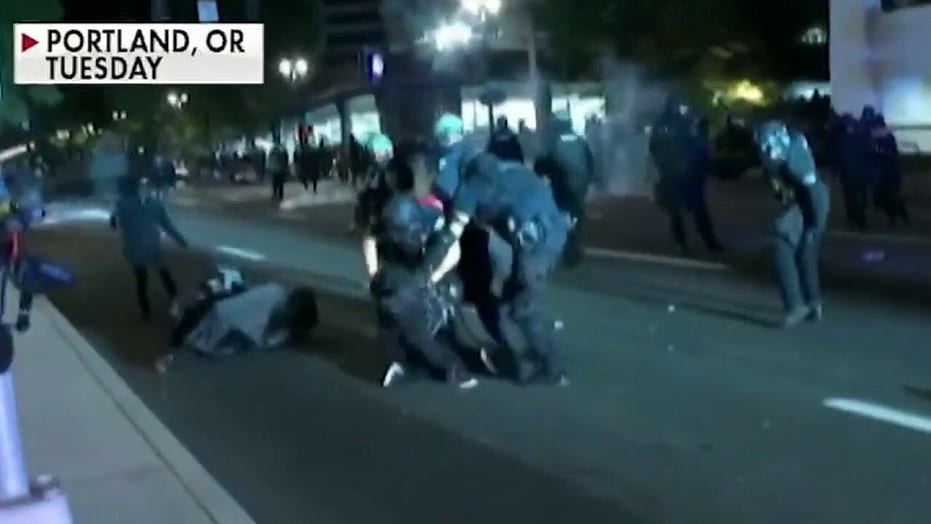 Violent clashes between a massive pro-Trump caravan that drove through Portland, Ore., and Black Lives Matter protesters left at least one person dead in a shooting Saturday evening, according to reports.

Video posted on social media showed a person suddenly dropping to the ground, and others rushing to assist, after what appears to be gunfire near an intersection as vehicles and pedestrians pass by.

Portland police said they were investigating a homicide in the area where the pro-Trump group and counter-protesters clashed but did not say whether the gunfire was directly related to the protests.

An Associated Press freelance photographer heard three gunshots and then observed police medics working on the body of the victim, who appeared to be a white man. The freelancer said the man was wearing a hat bearing the insignia of Patriot Prayer, a right-wing group whose members have frequently clashed with protesters in Portland in the past.

A man is treated by medics after being shot during a confrontation on Saturday, Aug. 29, 2020, in Portland, Ore. Fights broke out in downtown Portland as a large caravan of supporters of President Donald Trump drove through the city, clashing with counter-protesters. (AP Photo/Paula Bronstein)

Police haven't confirmed any details about the victim.

“Portland Police officers heard sounds of gunfire from the area of Southeast 3rd Avenue and Southwest Alder Street. They responded and located a victim with a gunshot wound to the chest. Medical responded and determined that the victim was deceased,” the Portland Police Bureau said in a statement.

Several arrests were made before the shooting and police advised people to avoid the area as the caravan arrived downtown while a protest was underway.

The pro-Trump rally's organizer, who coordinated a similar caravan in Boise, Idaho, earlier in the week, said in a video posted on Twitter Saturday afternoon that attendees should only carry concealed weapons and the route was being kept secret for safety reasons.

Tensions began escalating to violence earlier in the day when racial-injustice protesters confronted the pro-Trump caravan as it drove through the city following a rally at the Clackamas Town Center.

A man is being treated after being shot Saturday, Aug. 29, 2020, in Portland, Ore. (Associated Press)

Protesters attempted to stop caravaners by standing in the street and videos from the scene showed sporadic fighting, as well as Trump supporters firing paintball pellets at opponents and using bear spray as counter-protesters threw things at the Trump caravan.

The shooting happened after most of the caravaners had left the downtown area, OregonLive reported.

Portland has seen more than 90 nights of continued protests and rioting in the downtown area and other parts of the city since May 25, when George Floyd died in police custody in Minneapolis.