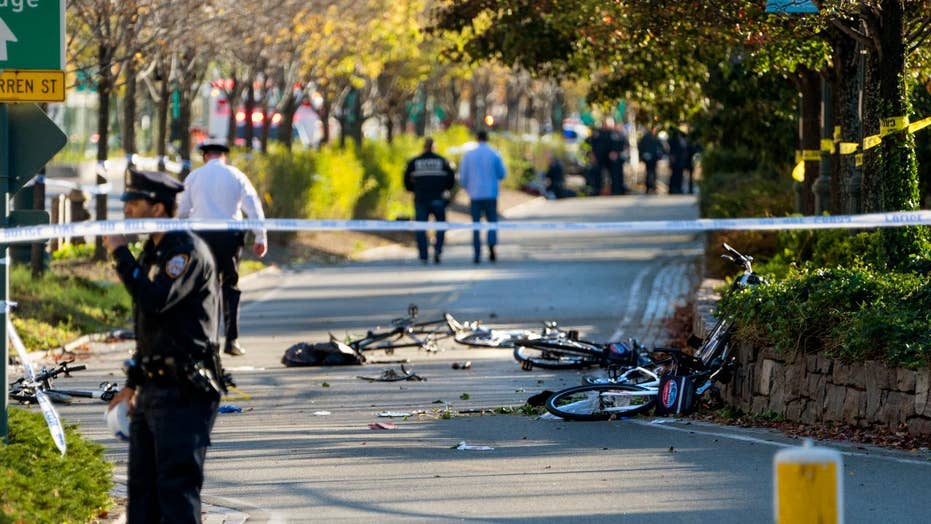 White House sends thoughts and prayers to those affected.

At least eight people were killed and several were injured Tuesday after a rental truck tore through a bike path in Lower Manhattan in New York City.

The suspect, who reportedly shouted “Allahu akbar” ("God is great") after exiting the vehicle, was hospitalized after being shot by the New York Police Department and was expected to survive.

The attack was being investigated as terrorism by the FBI and NYPD, Fox News confirmed.

Here’s what politicians around the U.S. were saying:

"In NYC, looks like another attack by a very sick and deranged person," President Donald Trump tweeted. "Law enforcement is following this closely. NOT IN THE U.S.A.!"

"We join in mourning the dead, praying for the wounded, thanking first responders, & sending our love to all of NYC," House Minority Leader Nancy Pelosi, D-Calif., said in a statement on Twitter.

"My heart and prayers are with the people injured and killed in Manhattan today," Rep. Frederica Wilson D-Fla., wrote on her Twitter page.

"My heart is w the people in lower Manhattan. I'm grateful to our brave first responders & wishing all those injured a speedy recovery," Rep. Carolyn Maloney, D-N.Y., said.

"Prayers with those killed and injured in NYC and their families," Sen. Tim Scott, R-S.C., wrote on Twitter.

"Heartbreaking," Rep. Nita Lowey, D-N.Y., wrote on Twitter. "Praying for the victims of the tragedy in Lower Manhattan."

"Saddened by the tragedy in NYC. Our prayers are w/the victims, their families & first responders," Vice President Mike Pence tweeted. "Those responsible must be held accountable"

"A horrific act of terror in NYC today. My heart is with the victims and families - I am grateful to the NYPD, FDNY, EMS, NYS police and FBI," Sen. Kirsten Gillibrand, D-N.Y., said.

"New Yorkers see this attack for what it is - an attempt to sow fear," former President Bill Clinton tweeted. "We stand against terror as we grieve for the victims and thank the @NYPD."

"This was a cowardly act of terror. It was intended to break our spirit. But New Yorkers are resilient. We will be undeterred," New York City Mayor Bill de Blasio said on Twitter.

"New York's resilience is stronger than a cowardly act of terror. Thinking of the victims, their families, & the responders who saved lives," 2016 Democratic presidential nominee Hillary Clinton tweeted.

"Michelle and I are thinking of the victims of today's attack in NYC and everyone who keeps us safe," former President Barack Obama tweeted. "New Yorkers are as tough as they come."

"New York, we love you. Grateful to first responders who saved lives today. Jill and I are keeping you all in our prayers," former Vice President Joe Biden said on Twitter.