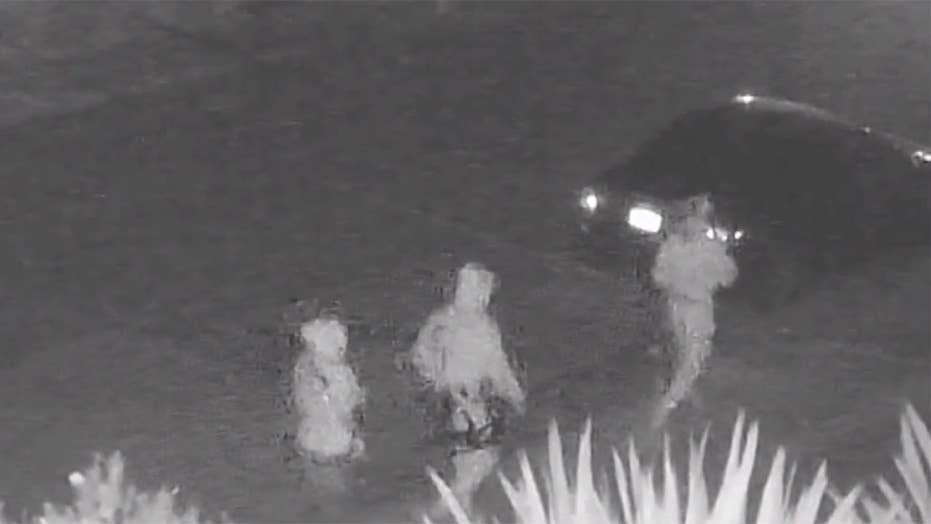 Footage shows the suspects walking out of an alley on East Cliff Drive with a duffle bag and a rifle.

Police on Wednesday released black-and-white surveillance footage of three people walking toward the home of millionaire tech executive Tushar Atre the night he was kidnapped from his palatial home overlooking the Pacific Ocean on Oct. 1.

The footage, released by the Santa Cruz County Sheriff's Office, was captured at 2:47 a.m. on Oct. 1. In it, people are walking toward Atre's home. Three people wearing pants, sneakers and sweatshirts were seen walking out of an alley toward Pleasure Point Drive, where Atre lived. One carried a duffel bag while the other had a rifle.

Atre was last seen getting into his white 2008 BMW SUV. He was later found shot and killed.

His bleeding body was left at another property he owned in the Santa Cruz Mountains in California.

Atre was last seen getting into his white 2008 BMW SUV. He was later found shot and killed.  (Santa Cruz County Sheriff's Office)

The authorities released the video in the hope that someone might recognize the figures' clothing, mannerisms or gait, which could aid in identifying the suspects. Their faces are not visible in the footage.

"It's an eerie video... and it's hard to watch knowing what the suspects did to Mr. Atre."

"It is an eerie video,"  Sheriff's Office spokeswoman Ashley Keehn said. "And it's hard to watch, knowing what the suspects did to Mr. Atre."

She said her department suspects that "someone knows who these people are, and we need your help."

Authorities previously said they believe the motive behind the murder was robbery.

The Sheriff's Office also announced a $150,000 reward for information that leads to arrests and convictions in the case. The money is being offered by a private company and expires on Dec. 30.

Atre was founder of AtreNet, a web design company that was launched in 1996 and specializes in creating websites for companies. His company's website lists Hewlett-Packard, GitLab, Perforce, MacuSight and Bay Alarm Medical among its clients. His Instagram page was replete with images of camping, hiking and surfing,