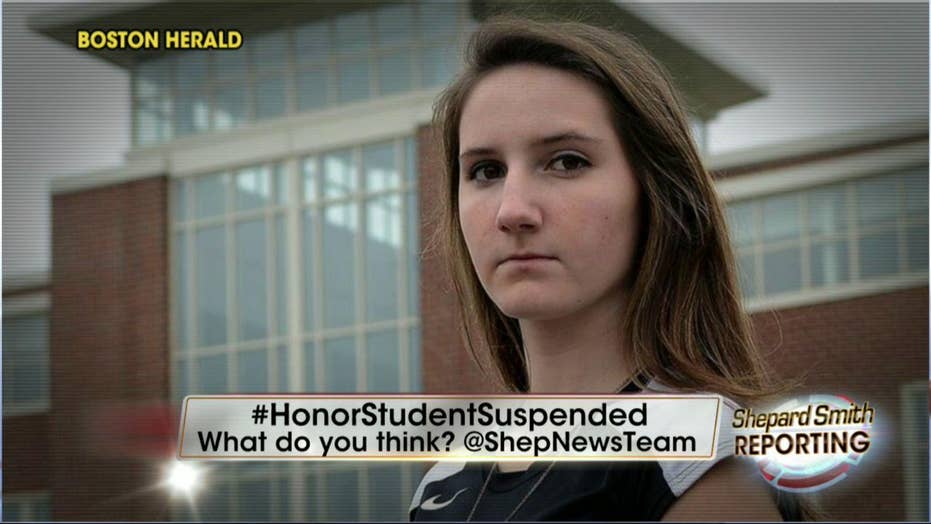 As the Massachusetts high school volleyball player suspended for coming to the aid of a boozed-up pal served out the final game of her punishment Friday, an e-mail penned by a police officer that appears to exonerate her has come to light.

North Andover High School’s Erin Cox was on the sidelines Wednesday for the Scarlet Knights’most recent outing against rival Tewksbury, ESPNBoston.com reports.  The 17-year-old suspended for five games and stripped of her captaincy reportedly cheered on her teammates in a straight-set win.

Meanwhile, the North Andover Citizen newspaper reports it obtained an e-mail sent by Boxford Police Officer Brian Neeley to the North Andover Public School administration in the wake of the party that sparked the national brouhaha.

In the electronic note, Neeley reportedly writes: “I responded with several other officers to an under aged party 732 Main St., Boxford. Erin Cox was one of many people under the age of 21 at the residence. I had the opportunity to speak with and observe Erin Cox while waiting for her mother to arrive.

“Erin did not have the slightest odor of an alcoholic beverage coming from her person. She was polite, articulate, steady on her feet, and very remorseful for her decision to go into the residence but was only helping out a friend that had called her for a ride. If you have any questions please feel free to contact me.”

Cox was suspended for five games after coming to the aid of the drunken friend, who had requested a ride home.  Minutes after Cox arrived, Boxford police did, as well.  Students were either arrested or cited for underage possession of alcohol.

In a statement to FoxNews.com, Hutchinson wrote, “While some may decry the Administration’s actions as unfair or inconsistent with the principles of due process, our Administration wholeheartedly disagrees.

“To be clear, the Massachusetts Supreme Judicial Court has ruled that participation in interscholastic athletics is a privilege. Rather than simply revoking the privilege, our Administration has consistently afforded its student-athletes a reasonable opportunity to be heard before a disciplinary decision is made."

In another twist, a lawyer representing the Cox family tells FoxNews.com the suspension could derail Cox’s intent to play collegiate volleyball. Cox, according to statistics from Maxpreps.com, is an outstanding player who has accumulated 835 assists, 82 aces, 185 digs and 59 kills over 108 total varsity sets played.

“They aren’t sure and have gotten mixed answers,” says Wendy Murphy, the lawyer who sued the North Andover School District last week.

In response to the suit, a state judge ruled he had no jurisdiction. However, Murphy and Cox’s family have vowed to pursue the case – including actions against Principal Carla Scuzzarella and the District Attorney, Geoffrey Bok – in federal court.

The imbroglio has roiled community members such that a North Andover High School alum has begun an online petition drive in Cox’s name.

Holland told the news outlet his goal is to raise $1,000, which could then be used as a quasi-scholarship for Cox.

"I don't think they have the legal authority to do this," Holland reportedly said in reference to the school district, adding that as of Wednesday morning, his online effort had raised a total of $485.

As for Cox, ESPNBoston.com reports she will return to action Friday against Billerica. The senior, who has largely remained silent since the story broke, did speak to The Boston Herald on Sunday.

“I wasn’t drinking,” she reportedly said. “And I felt like going to get her was the right thing to do. Saving her from getting in the car when she was intoxicated and hurt herself or getting in the car with someone else who was drinking. I’d give her a ride home…I just feel very defeated. When you’re in high school you’re supposed to stay perfect and be perfect, but everyone makes mistakes.”

The Herald wrote that when asked whether should repeat her actions, Cox answered that she wouldn’t change a thing.