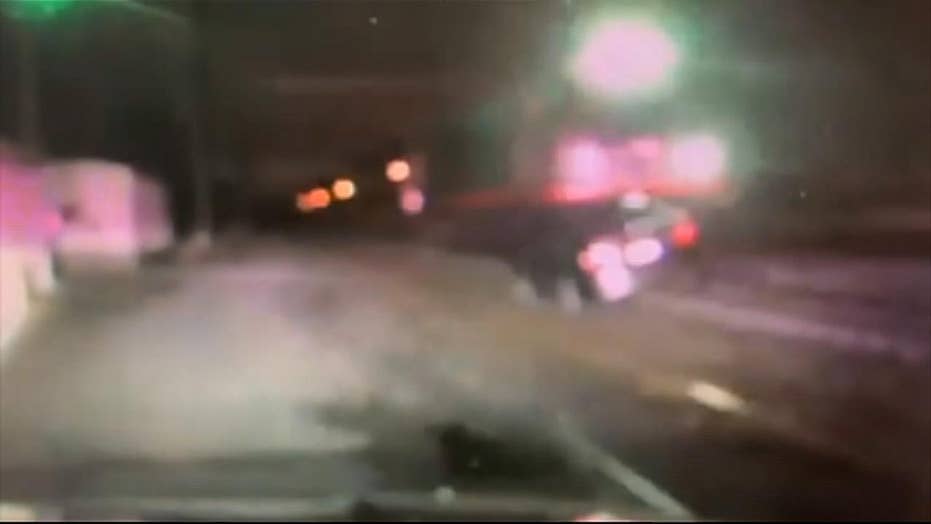 A police dashcam on Tuesday captured an Amtrak train in New Jersey slamming into the car of an alleged drunken driver who'd gotten stuck on the tracks.

The collision happened around midnight Tuesday underneath the Route #64 Bridge near the Princeton Junction Train Station in West Windsor, police said in a press release.

The moment after a westbound Amtrak train collided with a disabled vehicle on the tracks.  (WWPD)

Officers, responding to a call about a disabled vehicle on the tracks, found a 2012 Toyota Camry facing east while stuck on the westbound Amtrak track.

The driver, 23-year-old Amna Ahmed, approached one of the officers for assistance. Her father and sister had arrived on the scene in a white BMW to help.

Trains were notified to stop traffic because of the disabled Toyota and multiple people near the tracks.  Still, a westbound Amtrak approached at a high rate of speed, and an officer cautioned those by the tracks to take cover.

The train struck the Toyota, sending debris flying where the officers had been standing. The Toyota was destroyed and pushed into a patrol car which sustained significant damage.

Another patrol car and the white BMW sustained minimal damage after being hit with debris from the Toyota. The train sustained heavy damage to its engine car and numerous other trailing train cars, according to police.

Despite the damage, no injuries were reported. The collision shut down traffic in the surrounding area for several hours.

Police determined Amna had been driving while intoxicated and transported her to police headquarters for processing. She was charged with reckless driving and DWI before being released pending a future appearance at the West Windsor Municipal Court, police said.