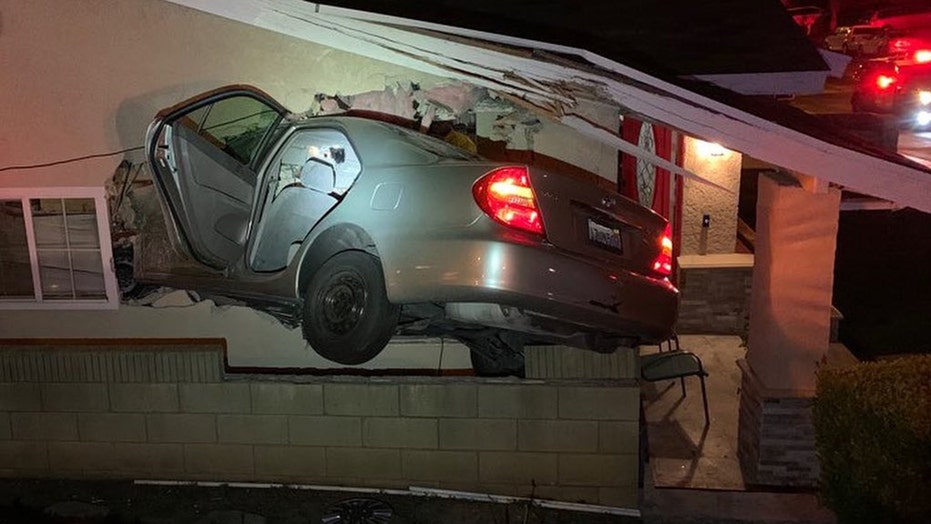 A stolen car ended up embedded in the side of a home after a high-speed crash Saturday.

“In response to the recent question asking the CHP why we are enforcing speed laws amidst the challenges of COVID-19,” California Highway Patrol said in a caption after posting the photos on instagram.

“In response to the recent question asking the CHP why we are enforcing speed laws amidst the challenges of COVID-19,” CHP said.  (California Highway Patrol)

The two occupants took off after the crash and are at large, according to the station.

The occupants of the house, who were sleeping at the time of the crash, were not injured.  (California Highway Patrol)

The occupants of the house were not injured. They were sleeping at the time.

One resident said on social media that she was thankful no one in her family was hurt, according to the San Gabriel Valley Times.

“The home is being evaluated to see if the structure is livable or will be red-tagged,” CHP spokesman officer Marcos Iniguez told the paper.

The vehicle's two occupants took off after the crash. (California Highway Patrol)

The paper reported that a security video captured the collision and two figures running away afterward.