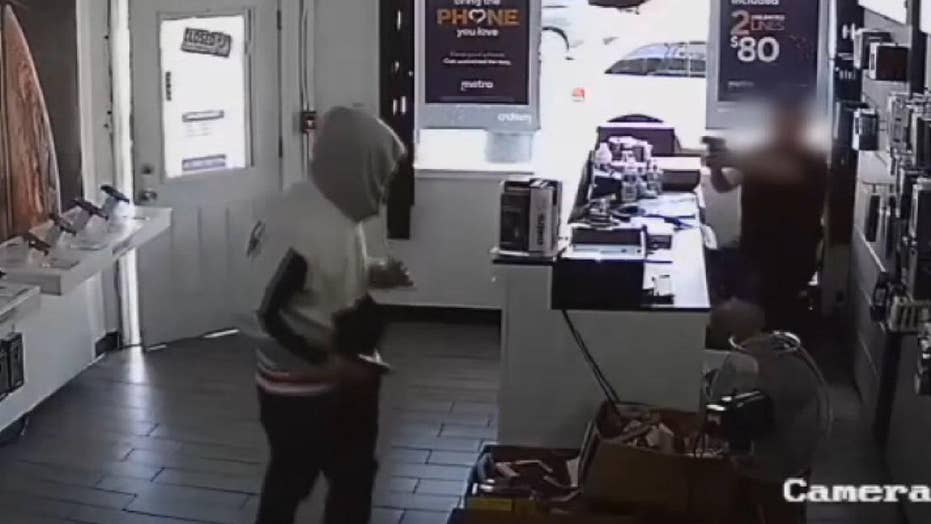 Raw video: Dramatic surveillance video from inside the MetroPCS shows a man armed with a gun entering the phone store.

An armed man who allegedly tried to rob a mobile phone store in Philadelphia on Monday was shot and killed by an employee in a dramatic moment captured on video.

The Philadelphia Police Department said the incident happened just after 4 p.m. at a Metro PCS store in the southwest part of the city when an unidentified man who appeared to be in his late 30s entered the business.

The man was trying to rob the store when the lone employee inside – who has a permit to carry a firearm – fired at the would-be robber multiple times, striking him.

"I heard about 10 shots and I got out (of) the car to look around and I saw the guy that works there run out of the store with a gun in his hand," a man who wished to not be identified told FOX29.

Police said the robber was pronounced dead at the scene minutes later.

Vietnam veteran stands up to armed carjackers on Memorial Day

Three men armed with guns confronted a veteran in Milwaukee and demanded his keys but took off after they were told no.

Debra Earle, who lives nearby, said she was rattled by what happened at the store.

No other injuries were reported and the weapon was recovered, according to police.

The investigation into the incident is ongoing, FOX29 reported.