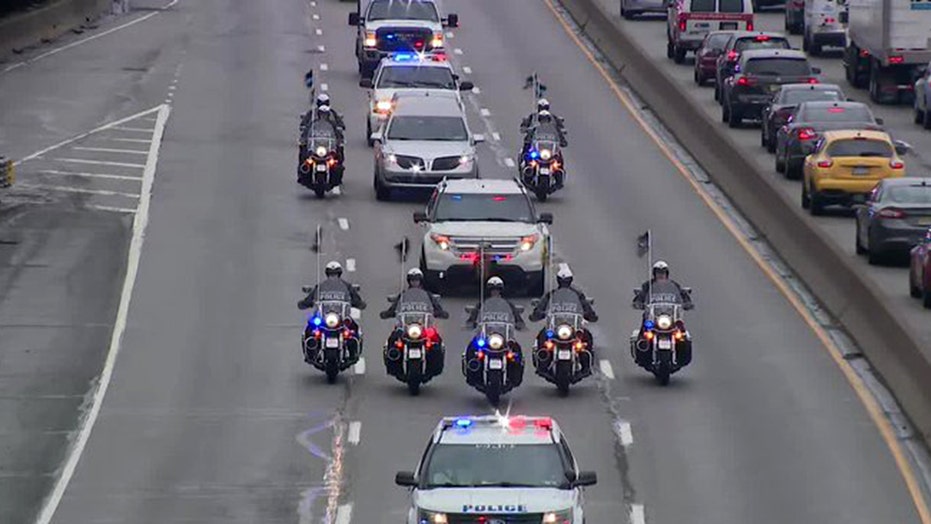 A  Philadelphia SWAT team officer was shot and killed early Friday as he and other officers were attempting to arrest a murder suspect.

Cpl. James O’Connor, 46, is the first police officer killed in the line of duty in Philadelphia in five years, according to reports.

The officer was struck by gunfire just before 6 a.m. at a home where the SWAT team was attempting to serve a warrant on the murder suspect. Officers returned fire.

“We just want everyone to know it’s a very sad day,” Police Commissioner Danielle Outlaw said, Fox 29 Philadelphia reported. “Not just for officers here but it’s a very sad day for the family who is here and who is mourning and still trying to stomach all of this now.”

Members of the Philadelphia Police Department escorted the body of fallen officer James O'Connor from the hospital to the morgue after he was shot and killed during the apprehension of a murder suspect.  (Fox 29 Philadelphia)

Officer gunfire wounded two occupants in the home, the station reported. They went to the hospital.

Two others were taken into custody, including the person named in the warrant.

The person was wanted in connection with a March 2019 homicide, the station reported.

O’Connor, a married father of two, including a son who also serves on the force, had been a police officer for 23 years and was with the SWAT unit for 15 years. His daughter serves in the U.S. Air Force.

Officers were seen blocking Philly’s top prosecutor Larry Krasner from entering the hospital before leaving, Fox29 reported. Krasner, who has sued the police department more than 75 times, according to the Wall Street Journal, has a tense relationship with officers, who accuse him of coddling criminals, being soft on crime and demoralizing the police department.

"The reason I am here is that we've had a very serious incident involving a police officer. I'm not going to get in front of the police commissioner and talk about details." Krasner told the station. "I'm here for the victim, for the victim's family, for any survivors, and also just to show how much we care about our law enforcement officers."