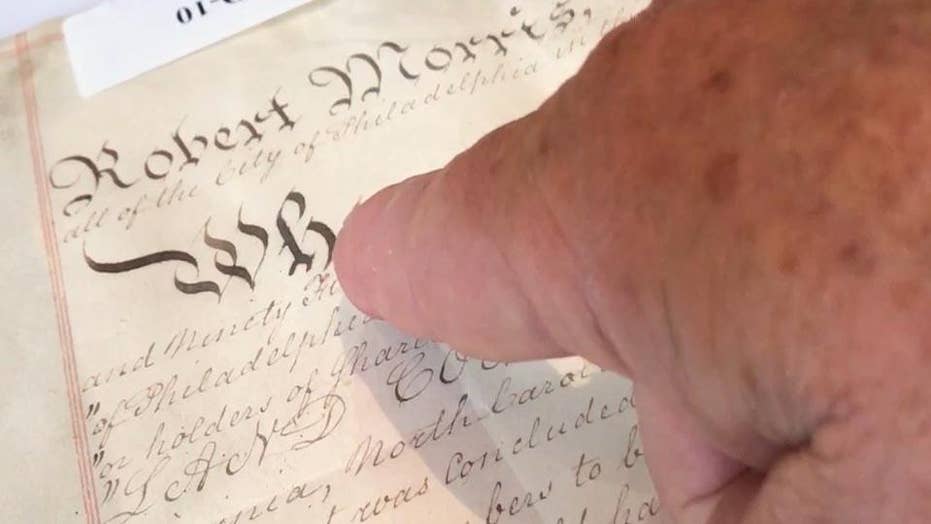 PHILADELPHIA – An unusual gift from a friend decades ago sparked an interest in James Reis that turned into a 30-year treasure hunt.

A friend gave him a mid-19th century land title. The gift, he said, “was like artwork.” It piqued his interest, and he embarked on a years-long effort to unravel the mysteries of the colonial era.

The Philadelphia real estate broker now holds an impressive collection of historical documents – there about 2,000 documents in his collection – most land deeds that are centuries old. The yellow, wrinkled torn pieces of parchment tell the stories of early American history.

There is a deed, on parchment, to George Washington's first presidential mansion or “white house,” located in Philadelphia, the nation’s first capital, on Market and Sixth Street. Reis, 73, also has the deed to the home where a 33-year-old Thomas Jefferson wrote the first draft of the Declaration of Independence.

Many of the documents are sealed with decorative impressions or flattened red circles of stamped wax to indicate a formal agreement. Seemingly mundane passages can unfold into rich stories of a developing nation, depending on the signees.

He said he fell in love with the characters and the detail put into each document.

“If I wasn’t a broker I’d be a detective,” he said. “I like to find out what happened and how it happened, so I keep digging until I get to the right answer.”

He said he felt historic land deeds should be collected, so he began traveling to his local bookstores to see if he could find some.

His passion led him from bookstore to bookstore all across the northeast.

He spent countless hours doing research on his finds. But, he said, he’s ready to put the treasure hunting days behind him.

Reis holding the deed to the land at Sixth and Market Street that would later became the first presidential mansion for George Washington. (Fox News)

Reis said the upkeep of 50 collections is a huge undertaking, and its time turn them over to someone who can properly care for them.

“Maybe a university will want them,” Reis said. “My only wish is that [the deeds] go to a good home where their historic value can be appreciated.”

He could probably get a lot for them – it’s unclear how much they are worth – but for him it’s about more than monetary gain. He wants his vast collection to inspire younger generations.

“Young people don’t understand the sacrifices made for them. Maybe if they did they’d appreciate this country a lot more,” he said.

Lee Arnold, senior director of the library and collections at the Historical Society of Pennsylvania, said collections, depending on the deed’s signature, can be quite valuable.

"A collection of deeds has a far greater historic value than just a single indenture, and can give you insight into both the collector and the collection," Arnold said.

For Reis, each collection of his tells a story.

“I was all over the place when I first started and then I realized I had couple of documents that related to Robert Morris, so I started to research his land company and today I have one of the best domestic collections,” he said.

Morris, Reis’ favorite colonial character, is best known for financing the American Revolution. An American banker and founding father, Morris kept his friend George Washington and his troops fed, clothed, and armed during the long war with England.

Most deeds are printed on vellum, a fine parchment made from the skin of an animal. While the documents appear to be extremely durable, if folded or left in an unsuitable environment they can rip or fade.

“I keep [the deeds] safe as I can in plastic and in cool areas but I’m no professional,” Reis said. “But it’s time to get them to professionals so they can care for them.”