Fox News’ Claudia Cowan reports on updates in the Paul Pelosi attack as the suspected attacker faces another day in court Friday and officials investigate security failings leading up to the attack.

David DePape, the 42-year-old Canadian accused of breaking into House Speaker Nancy Pelosi’s house last week and attacking her husband with a hammer, was not present for a brief hearing Friday as authorities remain tight-lipped about additional evidence against him.

At a Friday proceeding DePape was not present for, the court scheduled a discovery hearing for Nov. 28 and set a Dec. 14 preliminary hearing where witnesses could testify.

At a news briefing Thursday, San Francisco District Attorney Brooke Jenkins said she is confident investigators already have the evidence to prove their case but declined to release details beyond what is already in court filings.

"Mr. Pelosi opened the door, they were both holding a hammer and the police observed Mr. DePape pull that hammer away and then strike Mr. Pelosi," she told reporters after the hearing. "That is the most that we’re going to say at this point. Our job is not to try this case in the public or in the press. It’s to try it in a courtroom." 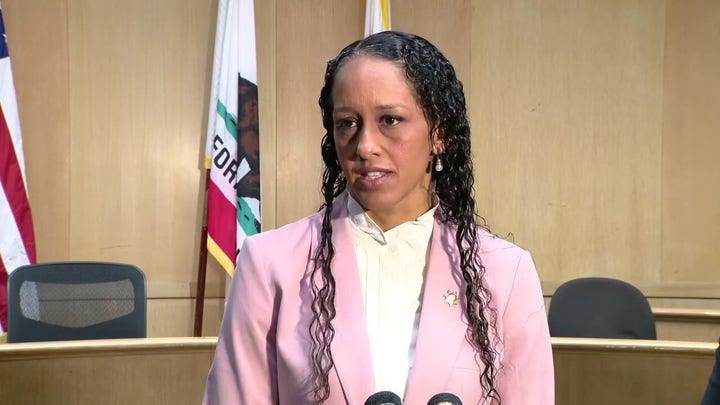 DePape faces a slew of state charges as well as federal charges of assault on the immediate family member of a federal official and attempted kidnapping of a federal official. They carry sentences of up to 30 and 20 years in prison with a conviction. DePape could face up to life in prison on the state charges, which he already pleaded not guilty to, and federal immigration officials have requested a detainer and could deport him if he is ever released from custody.

The judge was expected to rule on prosecutors' motion to hold him without bail as he awaits trial.

Paul Pelosi and Nancy Pelosi attend the Bloomberg and Vanity Fair cocktail reception following the 2015 WHCA Dinner at the residence of the French Ambassador April 25, 2015, in Washington, D.C.  (Dimitrios Kambouris/VF15/WireImage)

The House speaker's 82-year-old husband spent six days in the hospital following the attack, where he underwent emergency surgery on a skull fracture and treatments for injuries to his arms and hands.

San Francisco investigators have declined to release bodycam footage, the 911 call and other evidence in the case, including images from numerous surveillance cameras around the Pelosi home.

David DePape, right, records the nude wedding of Gypsy Taub outside City Hall Dec. 19, 2013, in San Francisco. DePape is accused of breaking into House Speaker Nancy Pelosi's California home and severely beating her husband with a hammer. DePape was known in Berkeley, Calif., as a pro-nudity activist who had picketed naked at protests against local ordinances requiring people to be clothed in public. (AP Photo/Eric Risberg)

They have also withheld details about DePape's criminal history, although court filings indicate he does have one.

Jenkins' office wrote that he was "convicted of other crimes for which consecutive sentences could have been imposed but for which concurrent sentences are being imposed."

PAUL PELOSI INVESTIGATION: WHAT TO KNOW ABOUT DAVID DEPAPE IN ATTACK ON NANCY PELOSI'S HUSBAND

That could indicate he previously took a plea deal, according to experts.

Details could come out at trial if prosecutors want to use his criminal history as an aggravating factor in seeking a harsher sentence, according to Neama Rahmani, a Los Angeles-based attorney and former federal prosecutor.

"That aggravating factor generally must be proven to a jury beyond a reasonable doubt under the United States Supreme Court’s Blakey decision," he told Fox News Digital.

"DePape may wave this Blakey factor so jurors do not hear about his criminal history, but if he does not, the prosecution will present evidence of DePape’s prior convictions and sentences at trial, specifically whether DePape previously received concurrent sentences when he could have received consecutive ones."

Jenkins said earlier this week that 911 audio and bodycam footage might be revealed in court as she doubled down on not releasing it to the media despite concerns over murky details about the incident.

In court documents, prosecutors allege DePape broke into the Pelosi home around 2 a.m. Oct. 28. Inside, he awoke a sleeping Paul Pelosi in his bedroom and allegedly asked for his wife, whom police say he wanted to "kneecap." Speaker Pelosi, the highest-ranking official in Congress, was in Washington, D.C., at the time.

DePape noticed "Ring security cameras everywhere," according to Jenkins’ office, and "was surprised when he found Mr. Pelosi still asleep after making … so much noise to gain entry."

"She’s not here," he replied, according to the San Francisco district attorney’s motion to detain DePape without bail. "She’s in Washington. She’s not going to be back for a couple of days."

"OK, well, I’m going to tie you up," the intruder stated, according to the filing. 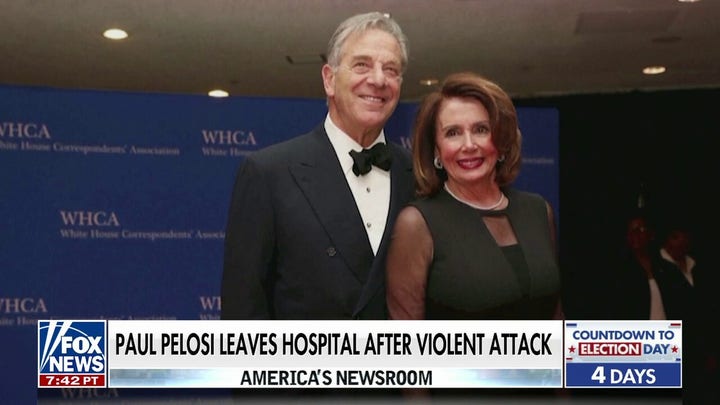 Pelosi asked to use the bathroom and made a 911 call on speakerphone around 2:23 a.m., according to court documents. After Pelosi gave his name and address, DePape allegedly spoke to the dispatcher over the open line.

"My name is David," he said, according to court documents. Although Pelosi said he didn’t know the intruder, DePape allegedly said, "I’m a friend of theirs."

"Defendant directed Mr. Pelosi not to open the door. But Mr. Pelosi opened the door with his left hand," according to a motion to detain DePape without bail. "As the door opened, the two men stood in the dimly lit foyer facing the officers. Mr. Pelosi nervously but calmly greeted them.

"When the officer asked what was going on, Defendant smiled and said, 'everything's good' and pulled his hands toward his body. When an officer turned on his flashlight, Defendant could be seen holding the bottom handle of the hammer with one hand and Mr. Pelosi's right arm with the other. Mr. Pelosi had his hand on the top of the handle near the hammer itself. One officer ordered, ‘Drop the hammer!’ At the same time, Defendant raised the hammer and said, 'um, nope.'"

CA MOTHER ATTACKED IN PARKING LOT WITH 1-YEAR-OLD IN HER ARMS, CHARGE AGAINST SUSPECT DISMISSED: REPORT

DePape allegedly broke free from Pelosi's grip and cracked him in the head. Responding officers tackled him immediately.

The congresswoman issued a statement Thursday afternoon thanking members of the public for their well wishes and San Francisco first responders.

"The Pelosi family is thankful for the beautiful outpouring of love, support and prayers from around the world," she said. "Paul is grateful to the 911 operator, emergency responders, trauma care team, ICU staff and the entire [Zuckerberg San Francisco General Hospital] medical staff for their excellent and compassionate life-saving treatment he received after the violent assault in our home."

Her husband remains under a doctor's care as his recovery continues, she said.