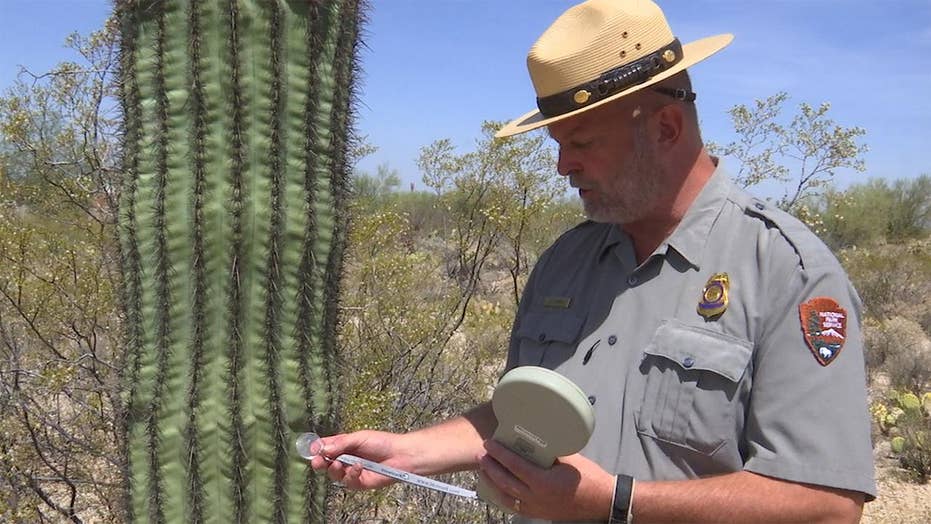 TUCSON, Ariz. – Cactuses, so iconic in the deserts of Arizona, are hot target for thieves.

About 20 to 30 of the spiky plants, called the “trees” of the desert, are stolen each year from Saguaro National Park, according to its chief ranger – frustrating officials in Arizona who say the plants are an important part of the park’s ecosystem.

“When people think of the Sonoran desert or they think of the southwest desert, (what) often comes to mind are the pictures of Saguaro’s," Stonum said. (Fox News)

“From an artistic point, from a natural resource point, from a cultural point, they add such a richness to the area,” said Scott Stonum, the park’s science and resource management chief.

But so many cactuses – which go for about $500 on the black market – have been stolen, that the park started implanting them with microchip technology to deter criminals. Ray O’Neil, chief ranger of Saguaro National Park, said microchips have been placed in about 1,000 cactuses in areas of the park close to boundary roads.

Ray O’Neil, chief ranger of Saguaro National Park, estimates 20 to 30 cacti are stolen from the park each year. (Fox News)

He said they work similar to microchips inserted in animals that traces them back to owners when they are lost. If a cactus is taken, then found, a quick scan will determine if the cactus had been stolen from the park.

"We have a database which shows us which cactus have been pit tagged and which then allows us to take a reader and run it over a cactus that we believe may have been taken from the park,” O’Neil said. “By running that reader over the pit tag, we can see if it’s one of our…numbered pit tags and then we can match that back to our database, which could then allow us to match it back to a hole in the ground in the park.”

O’Neil said if someone is caught stealing a cactus, the thief could face felony charges.

"We have a data base which shows us which cactus have been pit tagged and which then allows us to take a reader and run it over a cactus that we believe may have been taken from the park," O'Neil said. (Fox News)

“If we don’t have saguaro cactus in the park, then we’ve lost the reason that the park was established.”

Stonum said the saguaro cactus is essentially its own ecosystem, creating habitats for other desert animals and plant to live in.

“If you’re taking items like that from a national park, you’re reducing the value of the ecosystem,” Stonum said. “It’s a federal offense to damage or to steal these natural resource items. So, we strongly discourage it.”

Because the saguaro cactus is a national resource, the chief ranger feels strongly about the mission given from a federal level to protect the land he oversees.

“The enabling legislation of the National Park Service tells us that we’re to manage our areas, to protect our areas not just for today, not just for tomorrow, but for future generations,” O’Neil said.

O’Neil has two daughters, ages 10 and 11, and he said he wants their grandkids to have the same Sonoran desert experience visitors have today. Another part of that future generation is the junior rangers who take part in a three-week camp at the park.

“We have a permanent professional ranger staff that wants to catch them,” O’Neil said. (Fox News)

“These are national plants and they shouldn’t steal them at all…they shouldn’t be doing that,” said Cai Gwilliman, a fourth grader and junior ranger at the Sagurao National Park.

The cactus microchipping program has been in place at Saguaro Naitonal Park for a decade. So far, they haven’t caught any criminals but O’Neil said “it could happen today” and has a message for those vandals who try to steal what he’s trying to protect.

“We have a permanent professional ranger staff,” he said, “that wants to catch them.”