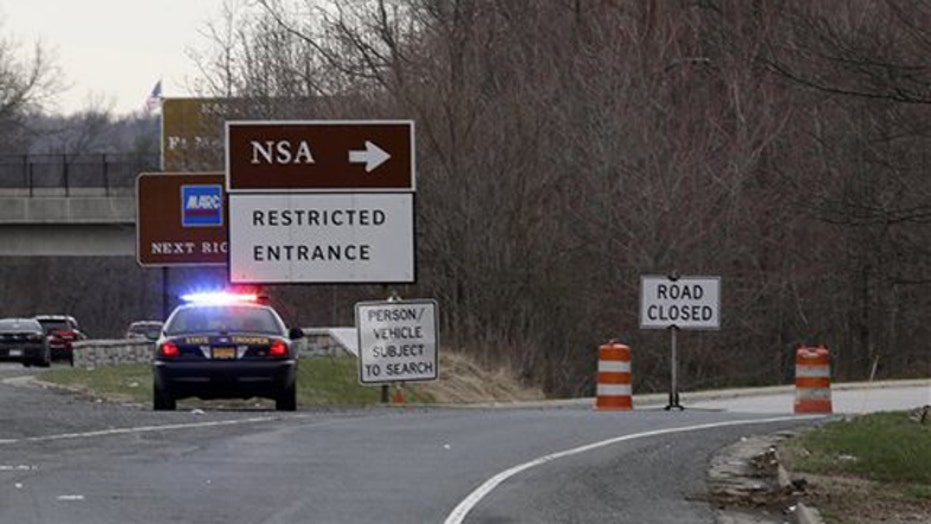 1 dead after driver tries to ram gate at NSA HQ

Two men dressed as women who tried to ram a stolen car through the gate of the National Security Agency headquarters in Fort Meade Monday may have been partying earlier and under the influence of drugs, law enforcement officials told Fox News.

One of the two was killed when guards opened fire and the other was injured.

The car was stolen from a hotel in nearby Jessup, Md., according to a spokeswoman for the Howard County Police Department.

The law enforcement officials told Fox the two as yet unidentified men may have been partying at the hotel and under the influence of some kind of drug before they stole the vehicle.

NSA Spokesman Jonathan Freed said in a statement that an agency officer gave the driver "routine instructions for safely exiting the secure campus," but the driver disobeyed them, so barriers were deployed.

Freed said the driver then accelerated toward an NSA police vehicle blocking the road, crashing into it. A U.S. government official familiar with the incident told Fox News that NSA security personnel shot at the vehicle when it tried to flee.

One person inside the unauthorized vehicle died at the scene. A source told Fox News that the injured person was taken to a hospital and was undergoing shock trauma, while an officer was injured in the arm.

"Just after 9 a.m. today, one person was killed and another injured when they attempted to drive a vehicle into the National Security Agency portion of the installation without authorization," the NSA said in a statement. "NSA security personnel prevented them from gaining access to the installation."

Aerial news images showed that one of the damaged vehicles was a white SUV marked "NSA Police." Its front end was crumpled, and the hood was up. The other was a dark, unmarked SUV.

FBI spokeswoman Amy J. Thoreson said the shooting scene is contained and the incident is not believed to be linked to terrorism. The agency is working with the U.S. Attorney's Office in Maryland to determine if federal charges are warranted, she said.

The NSA is handling the investigation with assistance from the FBI, who are doing interviews with witnesses.

"The President has been briefed on this morning's incident at the National Security Agency and will be updated as appropriate,” said White House Principal Deputy Press Secretary Eric Schultz.

Fort Meade, located in Maryland, is home to around 11,000 military personnel and 29,000 civilian employees, according to its website.

A building on the NSA campus was damaged by gunfire earlier this month. Authorities captured a man March 3 who they believe fired that night on the NSA site, as well as earlier at several nearby places and two moving vehicles. The suspect in that case, Hong Young, told police he heard voices directing him to fire on one of the occupied vehicles.

The gate that serves as the NSA entrance is just off the Baltimore-Washington Parkway, a scenic commuter route. In addition to the NSA, Fort Meade is home to the Defense Information Systems Agency and the U.S. Cyber Command. About 11,000 military personnel and about 29,000 civilian employees work on the property.