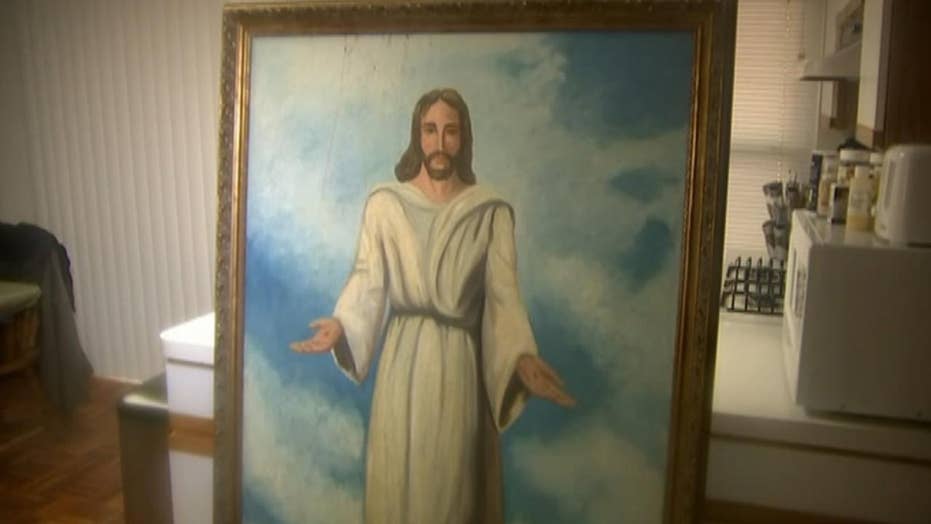 Painting hanging in front entrance of First Baptist Church in Massachusetts survives after the building was destroyed in a fire.

A lightning strike reportedly ignited a massive inferno Tuesday night at the 150-year-old First Baptist Church in Wakefield, Massachusetts, destroying almost everything inside -- but amid the rubble, crews miraculously found one painting survived the hellish flames.

A painting depicting Jesus Christ – standing in a white robe with hands, bearing the marks of crucifixion, extended – survived nearly untouched with only a few drops of water on it. The painting hung just inside the church’s front doors.

Crews began dismantling the remnants of the historic building Wednesday morning. There is no official cause of the fire, however, residents nearby said they saw lightning hit the church’s steeple.

The fire was reported after powerful thunderstorms rolled through the Greater Boston area.

In a statement, church officials expressed their gratitude no parishioners were hurt and thanked the fire department for battling the seven-alarm blaze.

“We know that we serve a God who specializes in restoring brokenness and who can bring beauty even from ashes,” they wrote. “So we move into the future with trust, hope, and gratitude.”

A GoFundMe page was created to help the church.

Interim pastor Norm Bendroth told Boston 25 that he was settling down to watch the Boston Red Sox beat the Los Angeles Dodgers in the World Series on Tuesday night when he saw “a fireball in the sky.”

“It just went up like a tinderbox. It’s a building built in 1870 and it’s a balloon-style so one the fire starts you know the whole building just went up quickly,” he said.

According to the National Register of Historic Places, the Italianate structure was constructed around 1872 and rebuilt in 1912 after a fire.

The estimated damage was more than $1 million, with the town’s fire chief, Michael Sullivan, telling the Boston Globe the “extent of the fire on arrival was just too great for us to stop it.”

He added: “It’s a shame, beautiful church. We feel bad about that but there’s really nothing we could do."