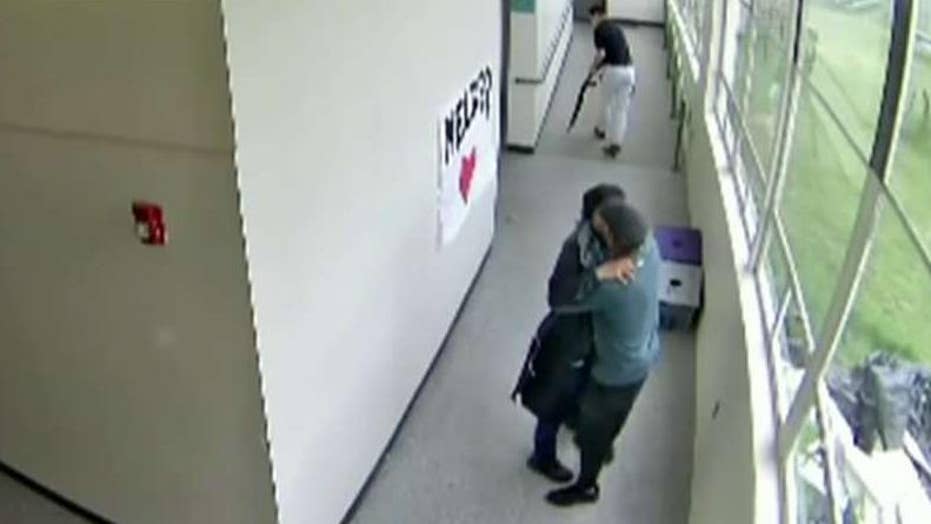 Keanon Lowe, the football, track coach and security guard for Parkrose High School helped de-escalate the situation by disarming, embracing and comforting an unidentified student, who walked into school with a loaded shotgun hidden in his jacket on May 17.

In the video, Lowe, a former wide receiver for the Oregon Ducks, emerges from a classroom holding the shotgun and backpedaling student before another teacher was able to take the weapon away from the pair. In a separate video, students ran for their lives after spotting the gunman in the hallway.

“I walk in there, I get to the classroom, I’m in the classroom for 15, 20 seconds - you know, I ask the teacher, ‘Is the student here?'” Lowe told KOIN. “The door opens - I’m within arm’s length of the door, about 3 feet away from the door, and there’s a kid with a gun, a shotgun. In a fraction of a second, I analyzed everything really fast."

Instead of lashing out, Lowe embraces the confused teenager and they are seen hugging in the hallway for at least a minute. The student then attempts to break from his embrace at one point before Lowe pulls him back in and continues to hold him tight.

Keanon Lowe, formerly of the Oregon Ducks (pictured in 2014) was seen disarming, embracing and comforting student Angel Granados-Diaz, 18, who walked into school with a loaded shotgun hidden in his jacket on May 17. (Getty)

"Then it was just me and that student. It was a real emotional time. It was emotional for him, it was emotional for me," Lowe said back in May, according to KATU. "In that time, I felt compassion for him. A lot of times, especially when you’re young, you don’t realize what you’re doing until it’s over."

The student had been suffering from a mental health breakdown at the time and was intending on killing himself, according to the Oregonian. The teenager was distraught and lonely over a recent breakup with his girlfriend and that didn't want to kill himself at home, because he didn't want his mother finding his body, according to the outlet.

His lawyer said that the student planned on ending his life in a school bathroom before deciding to go into a classroom with the hope it would increase the chances of someone calling 911 after he fired his shotgun.

Lowe was informed of the possible danger after a student reported the teenager had been making suicidal statements, which led Lowe to the classroom the teenager was in.

Following the incident, the student pleaded guilty to felony possession of a firearm in a public building and misdemeanor possession of a loaded firearm in public. He was sentenced to three years of probation on Oct. 17 and will receive any type of mental health treatment he needs in the future.

Lowe played football at the University of Oregon from 2011-2014 as a wide receiver. He caught 68 passes for 891 yards and 11 touchdowns throughout his career.

If you or someone you know needs help, you can call the National Suicide Hotline at 1-800-273-8255 or visit their website.