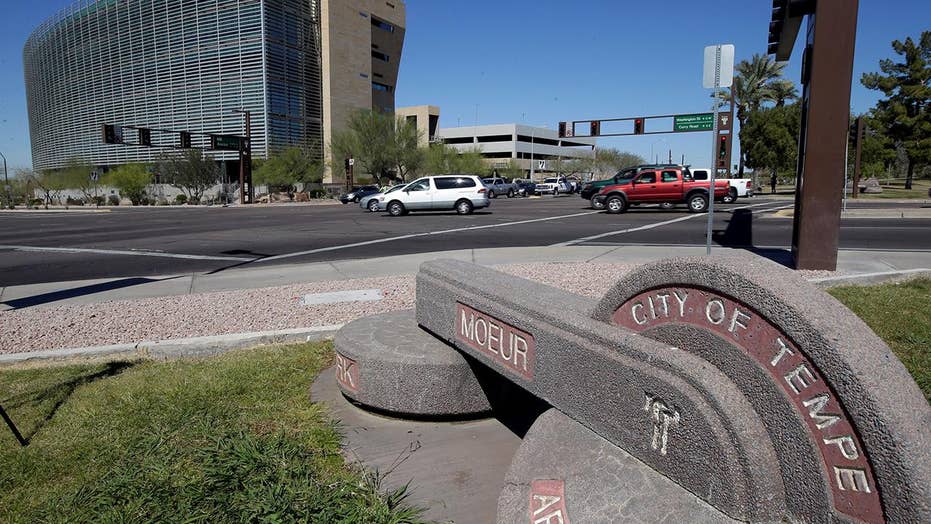 The operator of a self-driving Uber vehicle that struck and killed a pedestrian in suburban Phoenix Monday was a convicted felon who served almost four years in prison on an attempted armed robbery charge, according to court records.

The Volvo was in self-driving mode with Rafaela Vasquez, 44, at the wheel when the car hit 49-year-old Elaine Herzberg as she was walking a bicycle outside the lines of a crosswalk, police said. Herzberg later died at a hospital.

Court records obtained by the Arizona Republic show Vasquez has a criminal record in Arizona under a different legal name, and was released from prison in 2005.

The 44-year-old served three years and 10 months in a state prison for convictions on attempted armed robbery and unsworn falsification.

In this Dec. 13, 2016 file photo, an Uber driverless car heads out for a test drive in San Francisco. (AP Photo/Eric Risberg)

Tempe police Sgt. Ronald Elcock said local authorities haven't determined fault but urged people to use crosswalks. He told reporters at a news conference Monday the Uber vehicle was traveling around 40 mph when it hit Helzberg as she stepped on to the street.

Neither she nor the backup driver showed signs of impairment, he said.

"The pedestrian was outside of the crosswalk, so it was midblock," Elcock said. "And as soon as she walked into the lane of traffic, she was struck by the vehicle."

Uber immediately suspended all road-testing of such autos in the Phoenix area, Pittsburgh, San Francisco and Toronto after the deadly crash. The ride-sharing company has been testing self-driving vehicles for months as it competes with other technology companies and automakers such as Ford and General Motors.

The San Francisco-based company did not return an immediate request for comment from Fox News, but declined to comment to the Arizona Republic on the conviction and the company's hiring policies, citing an active investigation. Uber CEO Dara Khosrowshahi expressed condolences on his Twitter account and said the company is cooperating with investigators.

Uber was hit with a $9.8 million fine in November 2017 by the Colorado Public Utilities Commission after investigators determined the company hired nearly 60 drivers with previous felony convictions, The Denver Post reported at the time.

In this Dec. 13, 2016 file photo, an Uber driverless car is displayed in a garage in San Francisco. (AP Photo/Eric Risberg)

“We have determined that Uber had background-check information that should have disqualified these drivers under the law, but they were allowed to drive anyway,” PUC director Doug Dean said in a statement at the time. “These actions put the safety of passengers in extreme jeopardy.”

Uber said at the time the hirings were due to a "process error that was inconsistent with Colorado’s ridesharing regulations and proactively notified the Colorado Public Utilities Commission."

“This error affected a small number of drivers and we immediately took corrective action," spokeswoman Stephanie Sedlak told the Post. "Per Uber safety policies and Colorado state regulations, drivers with access to the Uber app must undergo a nationally accredited third-party background screening. We will continue to work closely with the CPUC to enable access to safe, reliable transportation options for all Coloradans.”