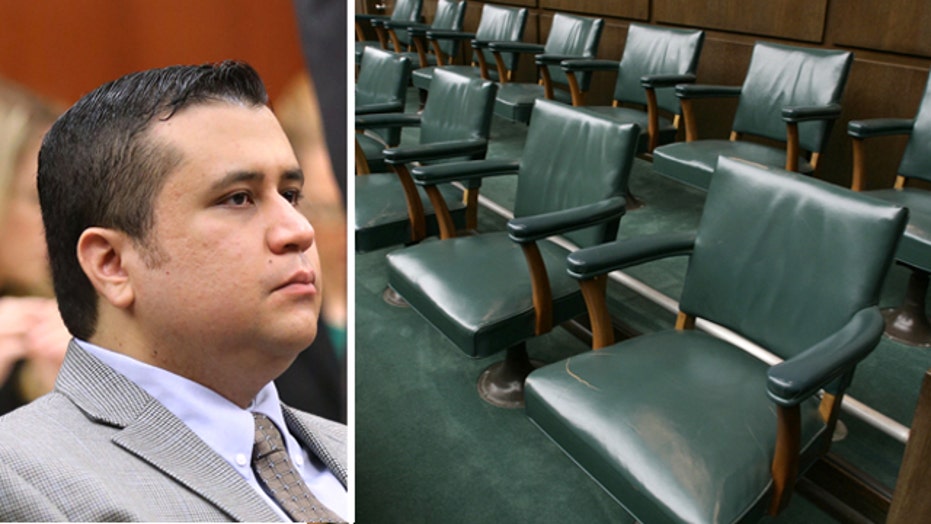 Zimmerman Trial: How will all-female jury pan out?

Six-member jury is 'not typical'

With six female jurors now seated to decide the fate of George Zimmerman, prosecutors and defense attorneys in his murder trial will work Friday to resolve remaining issues ahead of next week's opening trial statements.

The six jurors were seated Thursday after a nearly two-week long jury selection process, in which potential jurors were grilled about their prior knowledge of the case and their personal beliefs on guns, law enforcement and media coverage of the fatal shooting.

The six final jurors are all women – five are white and one is Hispanic.

"We've got a jury, which is great," Zimmerman attorney Mark O'Mara said at a press conference Thursday afternoon.  "I sort of hoped that we would get one in Seminole County, thought we would and I'm very glad that I was right, because this way we don't have to trouble moving around."

"We firmly believe that when these jurors see the overwhelming evidence that will be put before them in the coming weeks, they will find George Zimmerman guilty of murder on the night in question," attorneys for Trayvon Martin's family said in a statement Thursday night.

The racial and ethnic makeup of potential jurors is relevant, prosecutors say. They have argued that Zimmerman, who identifies himself as Hispanic, profiled Trayvon Martin when he followed the black teen last year as Martin was walking back from a convenience store to the house of his father's fiancee.

Issues to be resolved Friday include whether an audio expert can testify for the prosecution that screams captured on a 911 call belong to Martin. Circuit Judge Debra Nelson said she would make a decision Friday. Defense attorneys don't want the expert to testify, claiming his analysis is flawed.

Zimmerman admitted to shooting Martin in the chest with his 9-mm. handgun after calling police, exiting his pickup truck to follow Martin, and then getting into a fight with the teenager on a rainy night inside a gated community in Sanford, Fla., on February 12, 2012.

But Zimmerman also says the teen circled back and attacked him as he walked back to his truck – punching him in the face and slamming the back of his head into the sidewalk.

Photographs taken that night show Zimmerman with a broken nose, bruises and bloody cuts on the back of his head.

Zimmerman could face life in prison if convicted on second-degree murder charges. He claims he shot Martin in self-defense. A 44-day delay in Zimmerman's arrest led to protests around the United States.

Attorneys whittled the pool of hundreds of potential jurors down to 40 for the second round of questioning, and from there six jurors and four alternates were chosen. The potential jurors were given numbers to protect their identities during the selection process.

The case has gained national attention, and, during the first round of jury selection, potential jurors were questioned at length about their knowledge of the case.

&quotI haven't lived under a rock for the past year&quot said Juror B-51. &quotIt's pretty hard for people not to have gotten some information.&quot

Two of the jurors recently moved to the area -- one from Iowa and one from Chicago -- and two are involved with rescuing animals as their hobbies.

One juror had a prior arrest, but she said it was disposed of and she thought she was treated fairly. Two jurors have guns in their homes.

All of the jurors will be sequestered during the trial, which is expected to last two to four weeks.

Opening statements are scheduled for Monday.