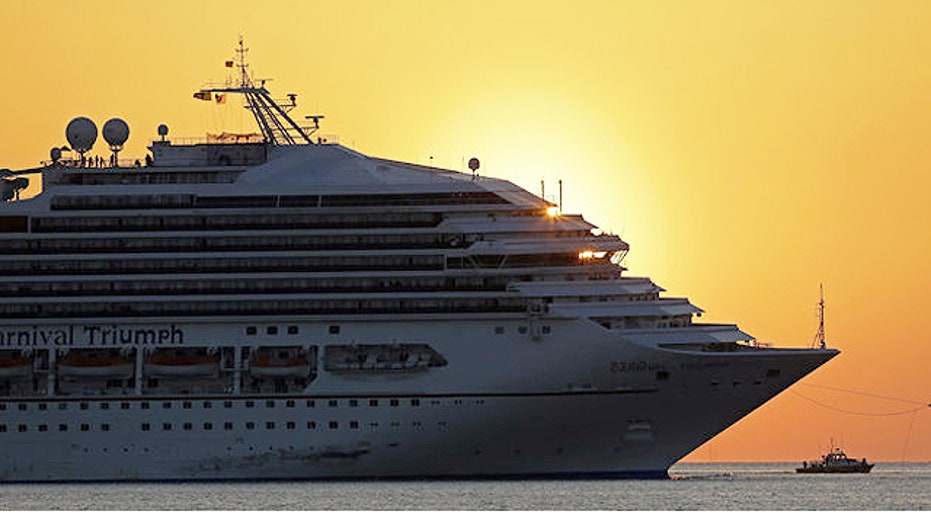 MOBILE, Ala. – The crippled cruise ship whose sewage-filled breakdown in the Gulf of Mexico subjected thousands to horrendous conditions tore loose Wednesday from the dock where it's being repaired, lumbered downriver and crunched into a cargo ship.

Wind gusts near hurricane strength shoved the 900-foot Carnival Triumph free from its mooring in downtown Mobile, Ala., where the ship was brought in a five-day ordeal that began when an engine fire stranded it off of Mexico in February. Hours later, four tug boats used several mooring lines to secure the ship to the cruise terminal.

A 20-foot gash about 2 to 3 feet wide was visible about halfway up the hull from the water and it wrapped partway around the stern. Underneath the gashed area, two levels of railing were dangling and broken. Electric cables that had been plugged in on shore were dangling from the port -- or left -- side of the ship. Carnival said damage, though, was limited.

The violent weather Wednesday also blew a nearby guard shack into the water. One shipyard worker was rescued and crews were searching for another, a U.S. Coast Guard spokesman said, but the cruise ship's mishap was unrelated.

Some crew members and workers had been staying on the ship while it was being repaired and people could be seen looking out the windows and on the deck of the ship Wednesday. Carnival said all 800 of its crew members and contractors who were working aboard were safe.

An engine fire disabled the Triumph on Feb. 10 and thousands of passengers were disabled for days. Passengers say they endured terrible conditions on board, including food shortages, raw sewage running in corridors and tent cities for sleeping on deck.

Tugs slowly towed the ship into port in Mobile, Ala., where it has remained under repair.

After the ship escaped, it rested against a cargo vessel. It drifted for a couple of hours before being secured as of 5 p.m., and moved to the Mobile Cruise Terminal, Carnival spokesman Vance Gulliksen said.

Coast Guard officials said they saw no sign late Wednesday of the missing BAE Systems employee who was knocked into the water with a co-worker when near hurricane-strength winds blew their guard shack over. The other man was rescued.

Coast Guard Petty Officer 2nd Class Bill Colclough said the missing man worked for BAE Systems that runs the shipyard. Authorities are unsure of how deep the water is where the men fell in, but the company's website mentions its ship-repairing operation is adjacent to a 42-foot deep ship channel.

The pier where the ship was docked wasn't damaged but one adjacent was when the ship bumped into it, said BAE spokesman John Measell.