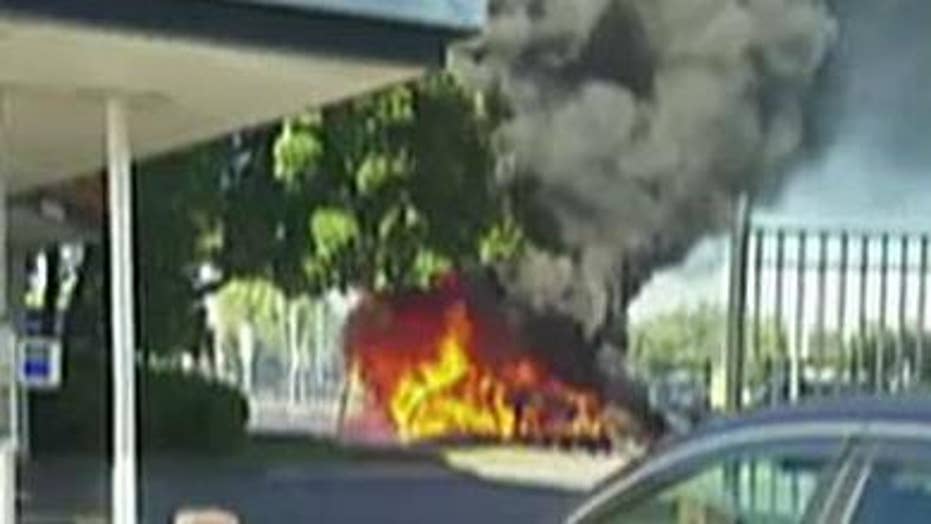 FBI investigating if crash was intentional

The pilot of a small plane was hospitalized and a passenger was presumed dead after the aircraft crashed in East Hartford, Conn., authorities said Tuesday.

East Hartford Mayor Marcia Leclerc said the plane was carrying a student pilot and an instructor when it crashed at approximately 3:40 p.m. local time. The plane struck a utility pole and wires, causing it to become engulfed in flames and knocking out power to approximately 500 people.

East Hartford Fire Chief John Oates said the pilot was transported to a local hospital with "significant" injuries. Oates added that it was a "safe assumption" that the plane's passenger was dead, but authorities could not yet reach the plane to confirm that.

Two people who were in a minivan near the crash site were also taken to a hospital after being "a little bit traumatized," Leclerc said. Neither person suffered any bodily harm.

Witnesses described a large explosion as the plane went down, with one comparing it to a "mushroom cloud."

"I saw the plane hit the power lines, go into a power pole and then hit just before a minivan and burst into flames," witness Frank Crandall told the Hartford Courant.

"Out of nowehere a plane crashed into the pole," Erick Zapata told the paper. "Pieces started flying everywhere ... I was nervous, I was shaking. It was crazy. I've never seen anything like it."

The crash occurred near the campus of Pratt & Whitney, a jet engine manufacturer. The company said in a statement that it did "not appear at this time that any Pratt & Whitney employees or contractors were involved."

The Federal Aviation Administration (FAA) described the plane as a twin-engine Piper PA-34 that was approaching Hartford-Brainerd Airport, located across the Connecticut River from the crash site. The Courant reported that the plane had just taken off from the airport, but it was not clear where it was headed.