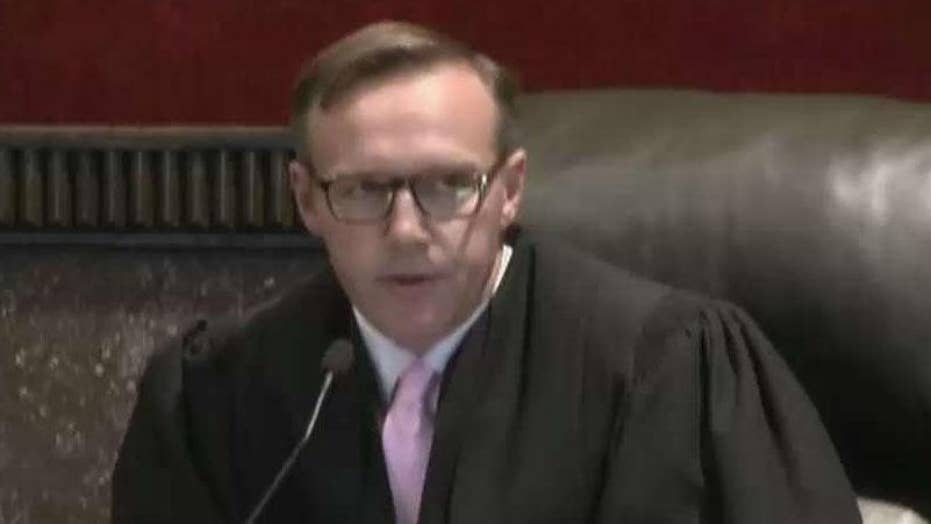 Mike Hunter asks Johnson &amp; Johnson CEO to take out his checkbook and begin to take responsibility for 'the mess' that the pharmaceutical giant created in Oklahoma.

The ruling Monday ordering Johnson & Johnson to pay $572 million to clean up Oklahoma’s opioid crisis could impact similar lawsuits seeking to hold the drug industry accountable for overdose deaths across the country.

And the impact could be felt rather quickly.

A federal judge in Ohio is presiding over 1,500 opioid lawsuits brought by state, local and tribal governments, with the first two set for trial in October. The plaintiffs in those two cases are Ohio counties.

The Oklahoma verdict could put more pressure on Johnson & Johnson and the other drug industry defendants in those cases to settle while bolstering the claims of plaintiffs.

“Today’s ruling holding Johnson & Johnson liable for Oklahoma’s opioid epidemic serves as another milestone amid the mounting evidence against the opioid pharmaceutical industry who we allege started, fueled and conspired to create the largest public health crisis of our time,” said lead plaintiffs’ attorney Paul Farrell.

Oklahoma convinced the judge that Johnson & Johnson misled consumers about the risks of opioids creating a public nuisance — one of the claims being advanced in the Ohio litigation.

Echoing her view was Lisa Rickard, president of the U.S. Chamber of Commerce’s Institute for Legal Reform, who said if the decision wasn’t reversed "almost any industry could be the target of large-scale litigation.”

The deluge of lawsuits against opioid manufacturers, marketers and distributors has been fueled by an epidemic that has killed more than 400,000 people across the U.S. since 2000, according to the U.S. Centers for Disease Control(CDC).

More than 6,000 Oklahomans died from opioid abuse in the past two decades, according to reports.

This June 17, 2019, file photo shows 5-mg pills of Oxycodone. The first judgment is expected Monday, Aug. 26, in a lawsuit from a state government seeking to hold a drug company accountable for a U.S. opioid crisis that has ripped apart lives and communities. More trials and legal settlements are likely to follow the ruling in Oklahoma as the nation looks for answers and solutions to a massive societal and legal problem. (AP Photo/Keith Srakocic, File)

“Johnson & Johnson was the kingpin behind the nation’s opioid crisis,” Oklahoma Attorney General Mike Hunter said after the verdict.

He said the judge’s ruling was still a victory, even though the judgment amount was much less than the $17 billion the state wanted.

Johnson & Johson “did not cause the opioid crisis in Oklahoma, and neither the facts nor the law support this outcome,” company lawyer Michael Ullman said. He vowed an appeal.

Oklahoma reached a $270 million deal with Perdue Pharma, the maker of OxyContin, and an $85 million settlement with Teva, both of which faced criticism from state lawmakers, who argued the companies have control over dispersing funds. The Purdue settlement calls for about $200 million to go into a trust to fund an addiction studies center at Oklahoma State University in Tulsa.