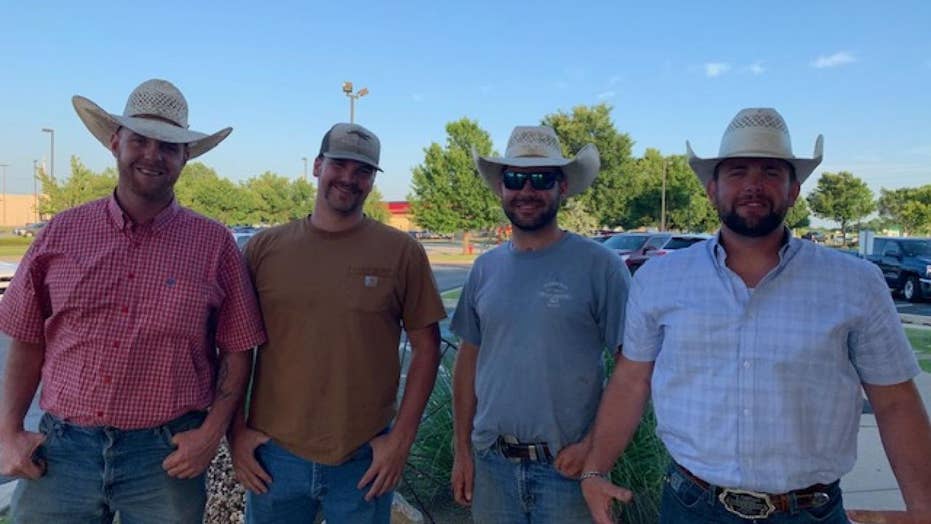 Oklahoma cowboys ride in to save hundreds of animals from flooding

Oklahoma cowboys came to the rescue of hundreds of animals from unprecedented flooding.

TULSA, Okla. – For the past two weeks, farmers in Oklahoma have been gripped by unprecedented floods, forced to watch the decimation of decades of history, their ranches, their livestock, their livelihoods. But a group of four longtime friends and cowboys have set aside their own day jobs and joined forces to voluntarily save as many animals and signs of life as possible.

“When we realized how bad this flooding was getting, and knowing many people didn’t have the means to get the help they needed to get animals out, we made a Facebook post and offered to help free of charge,” Cory Conley, 31, from Catoosa, told Fox News. “This is the heartbeat of America. We weren’t going to sit back and do nothing.”

Amid the fast-motion disaster unfolding along with the relentless rains, the men – joined by dozens of other community volunteers who have additionally jumped on-board to help – have completed more than 15 urgent missions to aid animal rescue in the region. Their ultimate goal in most cases is to salvage defenseless animals and move them to higher ground.

In one incident, Hunter Webster, 24, from Claremore noted how he moved a herd up from submerged waters. But as disaster reigned and the water level rose, the second area also flooded and he again had to move the same livestock.

Some rescue endeavors have entailed pulling out horses that were belly deep in water and stranded for days. Others have consisted of dragging out hundreds of cows and sheep, and even a cat helpless on a pole as rising waters surrounded it.

“The cat’s owner was a lady who had died a few weeks earlier and now her daughter was taking care of it,” explained Casey Thomas, 29, from Coweta. “So, it was of extra importance the cat be saved.”

According to Thomas, they have saved more than 350 cattle, seven horses, four donkeys and of course – that one special feline.

The cowboys have had to shoot a pistol through fences that pliers couldn’t cut, used red solo cups to mark a makeshift trail through the woods as only the treetops were visible in the deepening floods, and roped cattle to boats.

“I had never roped a cow off the front of a boat until this week,” quipped Webster.

Hunter Webster on a rescue mission

While the group estimates that they have managed to save scores of animals, it evidently cuts at the core knowing what couldn’t be saved.

“Thousands of cattle lost. For some, it’s millions of dollars and it is all they have,” Shane Olson, 33, a native of Verdigris, lamented.

Given the value of one cow alone hovers around $1,000, each animal lost and saved bears a significant impact on the lives of every rancher. And in the counties caught up in the chaos, issues are slated to abound for some time when it comes to “mixed cattle” and deciphering what livestock belongs to which owner.

The cowboys have had to shoot a pistol through fences that pliers couldn’t cut, used red solo cups to mark a makeshift trail through the woods as only the treetops were visible in the deepening floods, and roped cattle to boats.

Now, with even more rain predicted in the coming week and months of unknowns ahead, the impacted Oklahoma communities are bracing for increased hard times. Endless acres of corn and crops have been destroyed, meaning a hike in the cost of everything from hay to feed to food will likely ascend in coming months. It remains to be seen when the farmers will be able to plant again. Moreover, the swaths of folk who make ends meet fishing have also suddenly found themselves unable to make money as the swollen lakes are still firmly closed.

But the cowboys insist they are in it for the long haul – aiding friends and strangers and taking no money – with their goal to inspire others to give back to their communities in desperate times of need. Subsequently, over the past week, they have also become something of regional celebrities – fixtures on local news and across social media, their rescue footage watched and shared thousands of times within minutes.

“We will continue until this is all over,” Conley added. “It’s a fine line whether these animals live or die, and we all would feel too guilty if we didn’t at least try.”