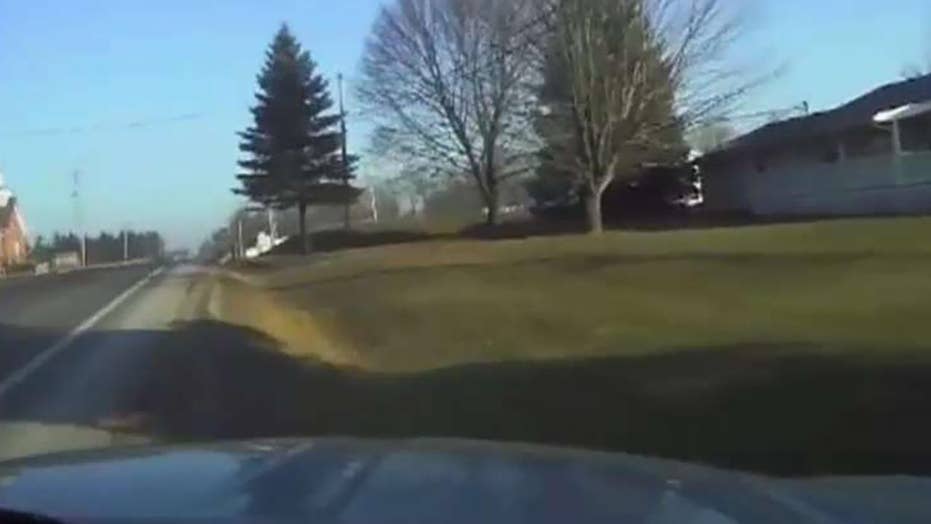 Dashcam footage from the stolen car shows the woman weaving on the road before losing control and crashing on a lawn.

An Ohio woman involved in a car crash who then told cops she'd been raped, stole a trooper's cruiser and led police on a high-speed chase Saturday -- that ended in yet another crash, officials said.

Troopers had initially responded to a report around 8:30 a.m. of a pick-up truck involved in a crash and a driver fleeing a vehicle, according to a police report obtained by WSYX-WTTE.

When authorities arrived, the woman -- who was only wearing a t-shirt and underwear -- had scratches on the front of her legs, was bleeding and began screaming she'd been raped and needed to get away, according to the police report obtained by the television station.

In the dashcam video released by the police, the woman appears to run past a trooper before jumping into the patrol car through the passenger side and taking off.

After a chase in the now-stolen cruiser, the woman crashed the vehicle into a tree and became stuck in a ditch, allowing officers to close in, officials said.

BOY, 7, FOUND DEAD INSIDE DENVER STORAGE UNIT HAD BEEN BURIED IN CONCRETE

The woman allegedly attempted to run away from the wrecked cruiser but was arrested by police and taken to a nearby hospital. A deputy who was injured during the incident was treated for minor cuts at the scene.

The Ohio Highway Patrol said they will be filing charges of receiving stolen property, failure to control, and obedience to traffic control devices against the woman, who has not yet been identified.

The Morrow County Sheriff's Office has opened an investigation into the rape allegations, according to WSYX-WTTE.