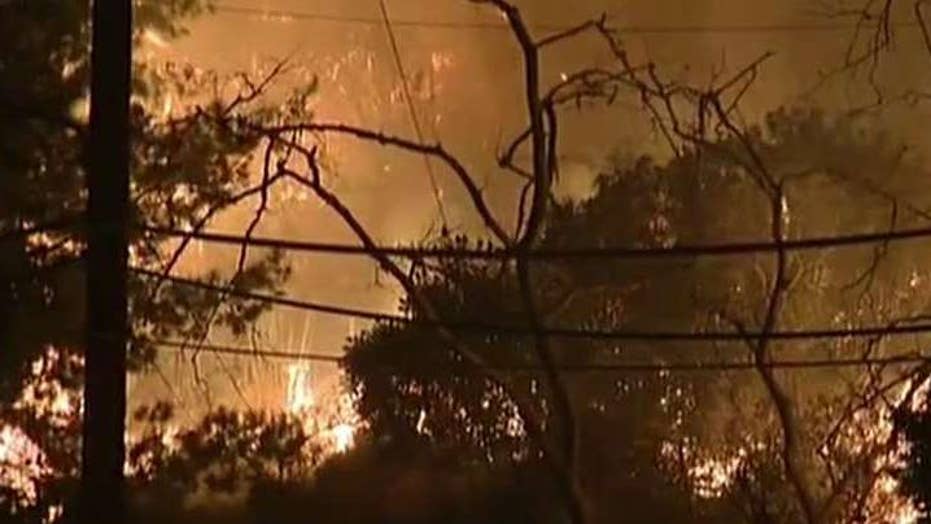 The Getty Fire in Los Angeles, which has destroyed a dozen homes and forced many people – including some celebrities – to escape the area, was sparked by a tree branch that fell on top of power lines and ignited nearby brush, officials said Tuesday.

"The fire was likely caused by a tree branch that broke off during the high wind conditions and subsequently landed on nearby power lines, which resulted in sparking and arcing that ignited nearby brush," the Los Angeles Fire Department said.

"This was, simply put in plain parlance, an act of God," Mayor Eric Garcetti said during a news conference.

The department also released dashcam footage of what is believed to be the moment the fire began.

Garcetti stressed that the blaze was not the result of faulty equipment. Utilities in the state have been under scrutiny from customers and public officials in recent years for their roles in several massive wildfires.

The blaze erupted around 1:30 a.m. Monday on the west side of Sepulveda Pass, where Interstate 405 passes through the Santa Monica Mountains, racing down toward neighborhoods and threatening thousands of homes. It broke near the J. Paul Getty Museum and drove many people, including celebrities LeBron James and Arnold Schwarzenegger, from their homes.

Garcetti said the city had cleared some brush in the area over the summer. The branch came from a tree 25 feet above the power line and 20 feet up a hill, KABC-TV reported.

More than 650 acres have burned and thousands have evacuated their homes. A dozen have been destroyed and five were damaged. Garcetti said there were no open flames but firefighters were working to extinguish embers throughout the burned area.

“They had to make some tough decisions on which houses they were able to protect. Many times, it depends upon where the ember lands," he said, The Los Angeles Times reported.

The blaze was 15 percent contained as of Tuesday evening, officials said.

The city's Department of Water and Power said it doesn't cut off service to customers during high winds, unlike Pacific Gas & Electric, California's largest utility, according to The Times.

“Our systems are completely different,” Andrew Kendall, senior assistant manager of the DWP’s power system, said at a board meeting earlier this month, according to the paper. “We have a 465-square-mile service territory. PG&E’s is 70,000 square miles, Edison is 50,000 square miles.”

Some 600 DWP customers in the fire area remained without power Tuesday.

California has grappled with a slew of wildfires in recent weeks. Crews are currently battling the Kincade Fire in the state's wine country; that fire has grown to 75,000 acres.