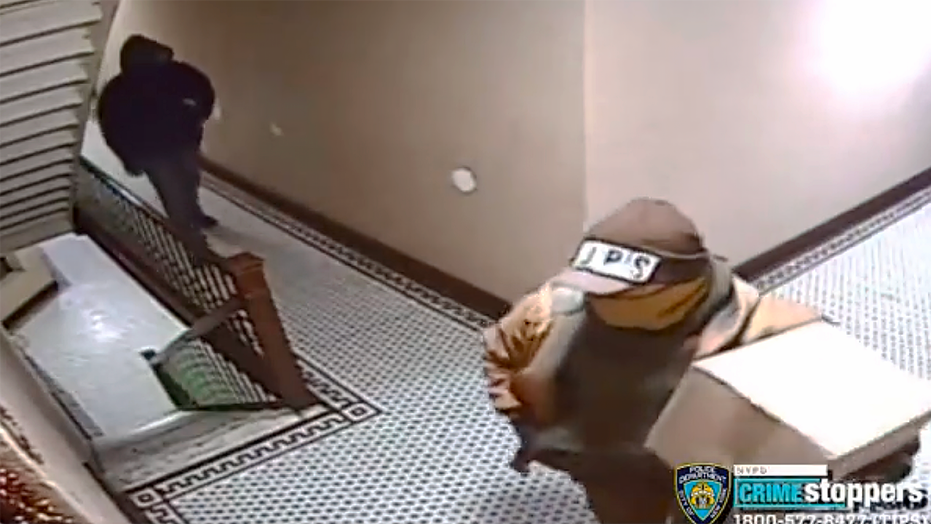 A thief posing as a UPS deliveryman and his accomplice robbed a New York City couple and their grandkids at gunpoint Monday night, forcing the family to tie themselves up before making off with the kids’ piggy bank savings, among other valuables, authorities said.

The robbery happened at an apartment at 1860 Billingsley Terrace in the Morris Heights neighborhood of the Bronx, police said.

The NYPD released surveillance footage showing two suspects in the hallway of the apartment building. One suspect, who is holding a box, is wearing a brown jacket and a winter hat emblazoned with letters that read "UPS." The second suspect is wearing a black hoodie.

A thief posing as a UPS deliveryman and his accomplice robbed a couple and their grandkids at an apartment in the Bronx on Monday night, authorities said.  (NYPD)

Police said that the man in brown knocked on the family’s door and announced himself as a UPS. When the 60-year-old grandmother opened the door, the man and pushed his way inside and drew a silver revolver from inside the box.

The second suspect then entered the apartment and the pair demanded that the woman, her 63-year-old husband and their grandchildren, an 8-year-old boy and 6-year-old girl, bind themselves using zip ties.

When the 60-year-old grandmother answered, the fake UPS worker pushed his way inside, drew a silver revolver from a box he was holding and forced the family to bind themselves with zip ties. (NYPD)

Police said the two suspects broke into a safe and the children’s piggy bank, stealing more than $7,500 in cash. They also stole two iPhones, and iPad and personal documents.

The footage shows the two men carrying the stolen items down the stairs and leaving the building.

The suspects made off with several items and more than $7,500 in cash from a safe and the kids' piggy bank.  (NYPD)

Neither the grandparents nor the children were injured, according to police.

The suspect wearing the fake UPS gear was described as a male with a light complexion and medium build. Police said he was last seen wearing a brown winter hat with "UPS" on the front, a brown face mask, a brown jacket, a green hooded sweatshirt, black pants and black shoes.

The suspects were seen leaving the apartment building at 1860 Billingsley Terrace in the Morris Heights neighborhood of the Bronx. (NYPD)

The second suspect was described as a male with a dark complexion and medium build. Police said he was last seen wearing a black facemask, a black hooded sweatshirt, blue jeans and black shoes.

Authorities asked anyone with information about the robbery to call the NYPD's Crime Stoppers Hotline at 1-800-577-TIPS (8477).