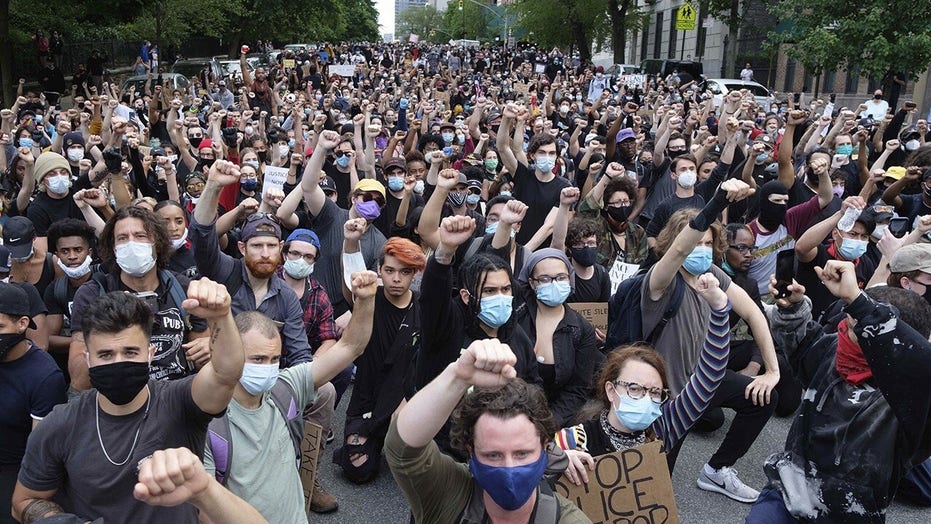 A New York City politician is claiming that “racism” – not crowds gathering in large, tightly packed groups to protest the death of George Floyd – would be to blame if there is a spike in coronavirus cases in the weeks ahead.

Mark Levine, who is the chairman of the New York City Council Committee on Health, made the remark Wednesday despite repeatedly urging the city’s residents in recent months to socially distance to prevent the spread of COVID-19, which has infected and killed more people there than any other place in the nation.

“Let's be clear about something: if there is a spike in coronavirus cases in the next two weeks, don't blame the protesters. Blame racism,” Levine wrote on Twitter.

Protesters kneel in Times Square in New York City on Tuesday. One of the city's Democrat councilmembers is claiming Tuesday that "racism" -- and not large, tightly-packed gatherings like these -- would be to blame for any spike in coronavirus cases in the weeks ahead. (AP)

“And let's remember that the police are increasing covid risk by using tear gas, herding demonstrators into tight spaces [and] putting people in crowded jails,” the Democrat added.

New York City – like many other places around the U.S. – has seen daily protests calling for police reform and accountability following the death of Floyd, a black man who died on May 25 after he was handcuffed and pinned down by a white officer in Minneapolis who also kneeled on his neck for more than eight minutes.

But instead of keeping at least six feet apart, many demonstrators showing up at the protests have been flouting social distancing guidelines, while others are choosing to join the crowds without wearing masks. Health officials and governors, in response, have warned that their actions could lead to another spike in cases just as many cities have reported bringing the deadly virus under control.

New York City’s Department of Health, as of Wednesday afternoon, has reported a total of 16,933 deaths from the coronavirus. Data shows that the city’s black and African-American residents are more likely to contract the coronavirus and be hospitalized from it compared to any other ethnicity — and make up at least 4,704 of the deaths.

The comments from Levine Wednesday are a departure from some of the advice he has given to locals in recent months.

In late March, Levine warned in a tweet that “NYC's hospital system is about to be over run. Here's what you need to do to blunt the impact: 1. SLOW THE SPREAD by staying home.”

A few weeks later, while pushing for streets to be closed so New Yorkers that are outdoors could have more space to socially distance, Levine said, “When people must go out, we need to give them room to spread out.”

And then the day before Floyd died, Levine posted on Twitter that congregating in large groups outside of bars carries a medium to high risk of catching COVID-19.

"The larger the group, the higher the likelihood of exposure. Wear mask except at the moment you drink. Remember close talking is believed to spread the virus,” he wrote.

A large group of protesters surround members of the New York City Police Department in the Brooklyn borough of New York on Saturday. (AP)

Levine’s latest remarks about blaming racism for any upcoming spike in coronavirus cases were met with skepticism and criticism on Twitter Wednesday.

"This statement is profoundly corrosive of the direly needed public trust in health authorities in the midst of a pandemic," one user wrote.

"No. It’s squarely on the protesters... and that’s a risk people are willing to take for their cause," said another.