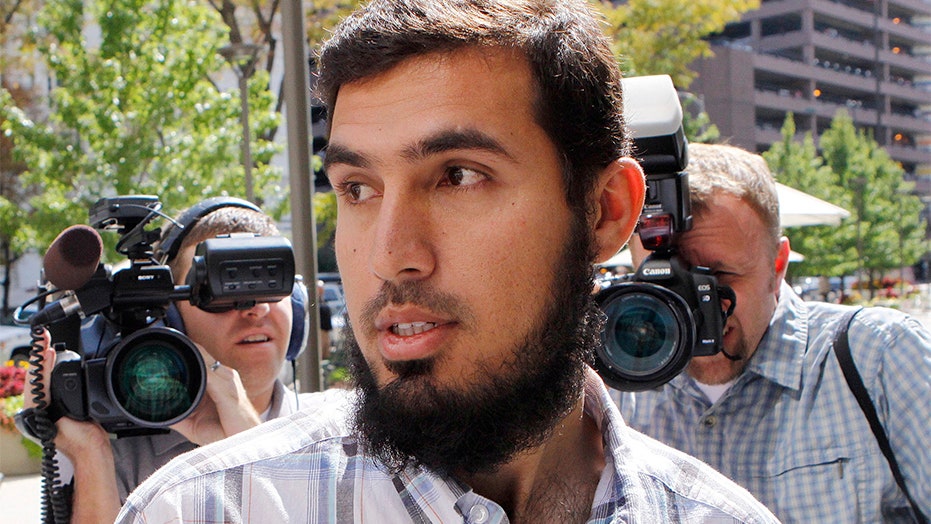 The ringleader of a failed Al Qaeda plot to bomb the New York City subway system around the eighth anniversary of the Sept. 11 terrorist attacks was sentenced to a decade behind bars on Thursday after spending years cooperating with federal authorities.

Najibullah Zazi, a 33-year-old naturalized U.S. citizen originally from Afghanistan, was busted in 2009 for a plot that then-Attorney General Eric Holder called "one of the most serious terrorist threats to our nation" since 9/11. The mission had called for Zazi and two childhood friends to conduct suicide bombings on New York City subway lines during rush hour.

Zazi's sentence was leaner than what federal guidelines suggested, as he faced the possibility of life in prison after pleading guilty in 2010 to his involvement in the terror plot, The Associated Press reported.

Judge Raymond Dearie ordered that he serve his sentence concurrently. Because Zazi was arrested in September 2009, only a few more months remain.

Ahead of the sentencing, defense attorney William Stampur highlighted how long he has represented Zazi, saying he has witnessed the “transformation in his early 20’s to a mature and educated adult.” That transformation has included “repudiation of any terrorism ideology” and Zazi has “unequivocally disavowed radical Islam," Stampur said.

Stampur also noted that his client has cooperated and helped the government “significantly in the fight against terrorism in this country and abroad."

The prosecution echoed the sentiment about Zazi's assistance, while also recognizing that he committed a "serious crime." Zazi seems to know “how he was naive and essentially manipulated” by Al Qaeda, the government said.

Prosecutors on Wednesday credited Zazi for his "extraordinary" assistance to authorities over the past nine years, including implicating his two best friends in the subway plot and providing "critical intelligence and unique insight regarding Al Qaeda and its members."

Najibullah Zazi arrives at the offices of the FBI in Denver for questioning in 2009.

ATTEMPTS BY TERRORISTS TO ATTACK NEW YORK CITY SINCE 9/11

Zazi's cooperation included meeting with the government "more than 100 times," prosecutors said, "viewing hundreds of photographs and providing information that assisted law enforcement officials in a number of different investigations."

Assistant U.S. Attorney Douglas M. Pravda, in a court filing, wrote that "Zazi's assistance came in the face of substantial potential danger to himself and his family.

"By aligning himself with the government against Al Qaeda, Zazi assumed such a risk,” Pravda said.

Zazi also spoke in court on Thursday, telling the judge that he wants to do his "best to correct my terrible mistake."

“I find it almost hard to imagine what I was involved in in 2008 and 2009," he said before going on to apologize "for all the sorrow I caused to my family.”

FLASHBACK: ZAZI WAS SURROUNDED BY RADICAL INFLUENCES BEFORE ARREST

Born in Afghanistan, Zazi moved to Pakistan as a child and then relocated to New York City as a teenager.

At age 14 he was living in Queens, where his father drove a cab. Friends said he initially seemed to like American life. He became a naturalized U.S. citizen and took a job operating a coffee cart on Wall Street.

Fellow food vendors said Zazi changed, though, after a series of trips back to Pakistan. He grew a long beard, stopped wearing western clothes in favor of tunics and began playing holy music. He also ran into financial problems, declaring bankruptcy in 2008.

Not long after that, Zazi and two childhood friends from Queens— Ahmedzay and Adis Medunjanin — agreed to travel to Pakistan in 2008 to try to join the Taliban. Instead, they were recruited by Al Qaeda operatives for a "martyrdom operation" in the Big Apple.

Zazi, who had moved to a Denver suburb and briefly worked as an airport shuttle driver, later said he wanted to "bring attention to what the United States military was doing to civilians in Afghanistan by sacrificing my soul for the sake of saving other souls." He cooked up explosives in a Colorado hotel room, made from a recipe of beauty supplies, The Associated Press reported.

Secretly, though, the FBI had gotten tipped off that Zazi was involved with militants. He was placed under surveillance in Colorado and followed as he drove to New York around the 2009 anniversary of the attacks. Police stopped his car as it entered the city. Officers let him go, but his rental car was later towed by the FBI.

Zazi was further spooked by a call from a Queens imam warning police were asking about him. He rushed back to Colorado. FBI agents executed a series of raids. News outlets learned of the investigation and also began hounding Zazi, who told reporters at the time that he had no idea what was going on. He was soon arrested.

Following his 2009 arrest and decision to cooperate, Zazi testified against Medunjanin in the subway plot, providing a tearful account that prosecutors said was "critical to establishing proof of Medunjanin's understanding of and participation in the conspiracy to kill American soldiers in Afghanistan and to conduct a suicide attack on the New York City subways."

In 2015, he gave critical evidence in the trial of Abid Naseer, a Pakistani national convicted of leading an Al Qaeda plot to bomb a shopping mall in Manchester, England.

Zazi also played a role in the prosecution of Muhanad Mahmoud al-Farekh, a U.S. citizen born in Texas who was convicted of supporting Al Qaeda and conspiring to bomb a U.S. military base in Afghanistan.