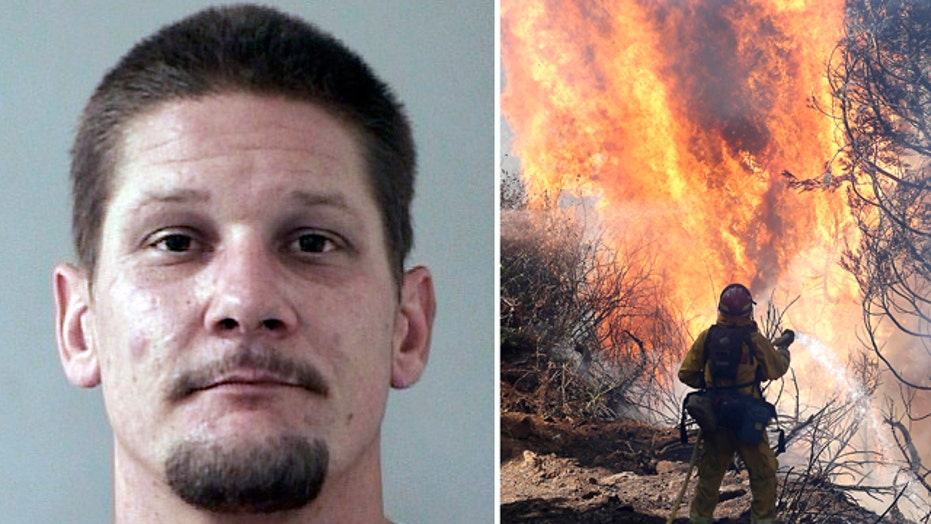 PLACERVILLE, Calif. – Firefighters are dropping record-breaking amounts of retardants on a massive Northern California wildfire that is burning explosively because of the prolonged drought.

California firefighters and the U.S. Forest Service together had bombarded the conflagration with more than a half-million gallons of retardant, fire spokeswoman Lynne Tolmachoff said Friday. That included more than 203,000 gallons in a single day.

Retardant — a water-and-fertilizer mix colored with red dye — are used as an initial attack tool on wildfires to buy time for crews to get to the scene and dig fire lines.

But the fire activity is so extreme it's pushing through their lines.

"They can slow it down a little bit. But they're not able to hold it long enough to get ground units in there to extinguish it before it burns through and continues its path," Tolmachoff said.

The King Fire, which authorities said was deliberately set, has chewed through nearly 120 square miles of timber and vegetation about 60 miles east of Sacramento. It was 10 percent contained.

The blaze in steep terrain forced the evacuation of 2,800 people and burned multiple structures in the White Meadows area of Pollock Pines, but details of the damage were not yet available because officials can't assess the area until it's safe to do so. One resident who has been helping carve fire lines with his bulldozer told the Sacramento Bee he lost his home on White Meadows Road when he went to check on it Friday.

"My house got burned. My house is gone. My outbuildings are gone," Tom Boscow said. "I just wish I'd been here."

The fire is threatening a key University of California, Berkeley research station that is home to scores of experiments on trees, plants and other wildlife. It is also threatening hydroelectric facilities and power lines that deliver water and electricity to the Sacramento region and some treasured Sierra Nevada recreations areas, the Bee reported. Some power stations and lines either burned or were shut down as a precaution, cutting off energy from three utility agencies' hydroelectric reservoirs.

The man suspected of setting the fire, Wayne Allen Huntsman, 37, pleaded not guilty to an arson charge Friday in El Dorado County Superior Court. He was being held on $10 million bail.

Authorities have not said what evidence they have linking Huntsman to the fire, by far the largest of about a dozen fires burning statewide.

The record retardant drop occurred Wednesday, and Thursday was another heavy day. Authorities reduced drops on Friday because smoke affected visibility for pilots.

Firefighters have used retardant since the 1950s to slow the advance of wildfires, but the practice is controversial because of its potential effect on wildlife. The Forest Service recently adjusted its retardant rules after two lawsuits that alleged the drops were killing fish, damaging watersheds and harming endangered species.

The agency now can't drop retardant within 300 feet of bodies of water on federal forest land and can't dump the slurry in certain exclusion zones designed to protect endangered plant species. The only exception is if people are in immediate danger from flames.

Andy Stahl, executive director of Forest Service Employees for Environmental Ethics, said the intended purpose of retardant was to attack "very remote fire" until crews could get to the blaze.

"But now we're seeing a dramatic increase in the amount of retardant being dumped because we're not just using it in those remote wilderness areas, but we're using it on every fire, everywhere, and there are more fires," he said.

The Forest Service used 12 million gallons of retardant nationwide last year, and 60 percent of it was dumped on California fires, Stahl said.

The federal restrictions don't apply to California firefighters, and Cal Fire has increased the amount of retardant during the past decade.

Tolmachoff, the state fire spokeswoman, didn't know how many gallons her agency dropped on fires last year. But she said retardant use was rising because of the addition of bigger DC-10 air tankers, expanding populations in fire-prone areas and the increasing size and frequency of fires caused by drought.

"Our main goal in California is to protect lives and the property and resources, and we put every effort we can into it," she said.