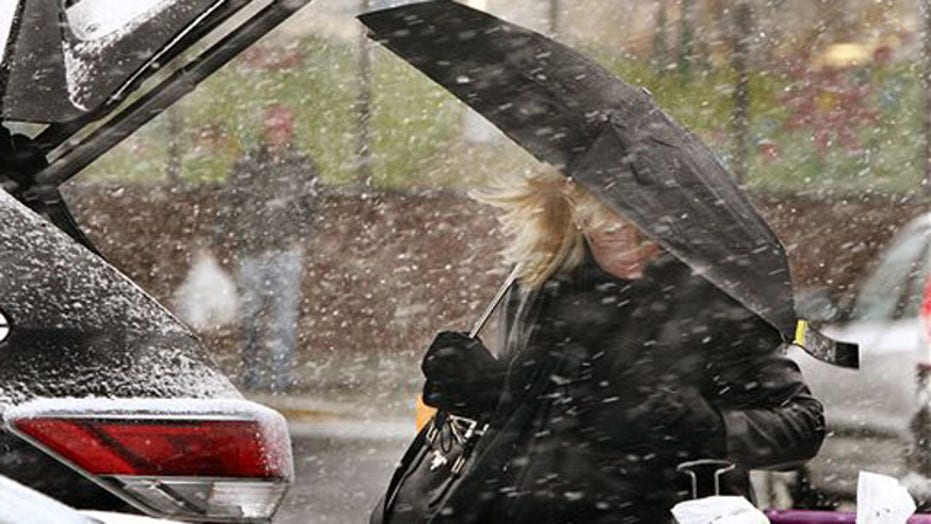 Mayor explains how Boston is preparing for major blizzard

Millions of people across the Northeast were told to stay home from work and school Tuesday, even as forecasters revised predictions that had originally called for record-breaking amounts of snow in some of America's biggest cities.

The blizzard had originally been predicted to bring between 2 and 3 feet of snow to an area stretching from northern New Jersey to southern Maine, along with hurricane-force winds. However, by early Tuesday, most forecasters said that only New England would bear the brunt of the storm, and even then the snowfall would not be as bad as expected.

Bruce Sullivan of the National Weather Service (NWS) told the Associated Press that Boston and Providence, Rhode Island, could get 2 feet of snow, New York 10 inches to 20 inches, and Philadelphia and central New Jersey about 6 inches.

The NWS issued a blizzard warning for a 250-mile swath of the region, meaning heavy, blowing snow and potential whiteout conditions. Forecasters warned that the wind could gust to 75 mph or more along the Massachusetts coast and up 50 mph farther inland.

In preparation for the storm on Monday, city and state officials up and down the Northeastern megalopolis ordered workers to go home early, banned travel for everyone except emergency responders and essential personnel, and ordered bridges and tunnels closed.

Early Tuesday, Maine Gov. Paul LePage joined his counterparts in Massachusetts, New Hampshire, Rhode Island, Connecticut, New York, New Jersey and Pennsylvania in declaring a state of emergency and announced that all state offices would be closed Tuesday. LePage cited the forecast calling for blizzard conditions as well as the potential for coastal flooding in the southwest of the state.

Massachusetts Gov. Charlie Baker and Rhode Island Gov. Gina Raimondo banned all non-essential motor vehicle travel beginning at midnight Tuesday. The storm poses one of the biggest tests yet for Baker, who has been in office for less than three weeks. He warned residents to prepare for power outages and roads that are "very hard, if not impossible, to navigate." Baker also said 500 National Guard members were on standby.

In Connecticut, Gov. Dannel P. Malloy ordered a travel ban beginning at 9 p.m. Monday and said power outages could top 100,000 in the state. He said that if residents lose power, they will likely be without it for "several days."

"It is imperative that you have a plan in place to get home safely this evening before the heavy snow begins and remain there for the duration of the storm," Malloy said Monday morning.

More than 7,700 flights into and out of airports around the region have been canceled, and many of them may not take off again until Wednesday. Boston's Logan Airport and Rhode Island's T.F. Green were closed Monday evening and no flights were expected to land or take off at either airport Tuesday.

On the rails, Amtrak announced that it would suspend rail service across New England Tuesday and modify its service between New York and Washington.

In New York City, subways and buses stopped at 11 p.m. Monday, while Boston's MBTA system was halted an hour later, with no service scheduled for Tuesday. New Jersey Transit shut down its trains late Monday, with officials saying service may not resume until Thursday.

Authorities banned travel on all streets and highways in New York City and on Long Island and warned that violators could be fined $300. Even food deliveries were off-limits on the streets of takeout-friendly Manhattan.

Shopping cart gridlock descended on Fairway, the gourmet grocery on Manhattan's Upper West Side. The meat shelves were all but bare, customers shoved past each other and outside on Broadway the checkout line stretched for a block as the wind and snow picked up. Store employees said it was busier than Christmastime.

Ben Shickel went grocery shopping in Chestnut Hill, Massachusetts, and found shelves had been cleaned out.

Last minute shoppers filed into the Jersey City ShopRite Monday evening, looking to stock up before the brunt of the storm hit. "I heard it's supposed to be snowing for two days straight, so we plan on staying inside and munching," said 18-year old Christian Waiters, who serves in the military.

On Wall Street, however, the New York Stock Exchange stayed open and said it would operate normally Tuesday as well.

Coastal residents braced for a powerful storm surge and the possibility of damaging flooding and beach erosion, particularly in New Jersey and on Cape Cod in Massachusetts. Officials in New Jersey shore towns warned people to move their cars off the streets and away from the water.

Utility companies across the region put additional crews on standby to deal with anticipated power outages.