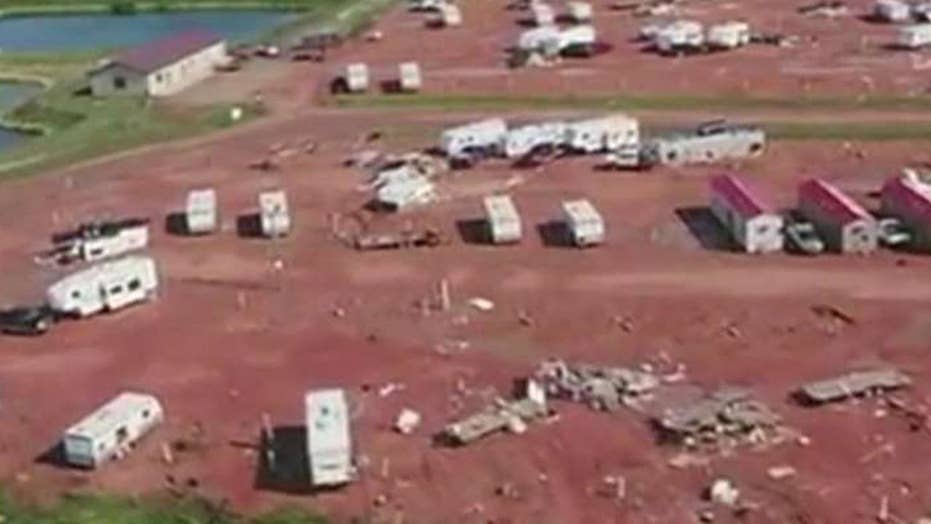 A newborn was killed and more than 100 structures were destroyed when a tornado tore through a North Dakota city early Tuesday, turning an RV park into a field of twisted metal and debris.

The McKenzie County Sheriff's Office said in a news release that a 1-week-old boy died from injuries sustained when the family's trailer home in Watford City flipped in the storm.

While the child's name was not immediately released, the Bismarck Tribune reported the baby was the son of Marisa Reber and Will Maguire. A GoFundMe account set up to help the child's parents said the infant’s name was Blake.

"At only 6 days old, baby Blake, his mother Marisa and father Will were enjoying finally being home with their newborn baby when a tornado suddenly struck their mobile home directly," Sheila Anderson wrote in the GoFundMe page. "Marisa held him tight all through the tornado as their home was tossed and destroyed. Blake was then life flighted to the hospital where they found he was suffering from severe head trauma."

The crowdfunding campaign has already received more than $14,000 in donations from more than 250 people as of Wednesday.

The National Weather Service said an EF2 tornado hit Watford City in the northwestern part of the state with wind speeds reaching 127 mph.

The sheriff's office said that 20 of the reported 28 injured in the storm were staying at the Prairie View RV Park, where high winds overturned some campers and damaged mobile homes. A total of 122 Structures – including RV trailers, outbuildings, and mobile homes – were destroyed while 79 structures sustained "moderate to severe damage."

Resident Eric Vail told KYYR-TV his family was fortunately not injured, but the tornado was fierce.

"That time the neighbor’s house picked itself up, the one behind us here, and came through my house. Basically destroying everything in its path. Yelled to my wife to get on the floor and climbed rubble heading to go find my son," he said.

Karolin Jappe, the McKenzie County emergency manager, told the Associated Press the RV park is one of the largest such facilities to spring up during the oil boom.

"It's just like an oversized RV park on steroids," Jappe said. "There's more devastation than a tornado four years ago. RVs flipped over. Trucks underneath RVs."

This photo provided by Clifford Bowden shows damage early Tuesday, July 10, 2018, at an RV park in Watford City, N.D., after a violent storm whipped through. (Clifford Bowden via AP)

Clifford Bowden told the AP he was in his recreational vehicle when the storm struck.

"My dog was with me and the next thing you knew the storm picked up my camper and slammed it on the ground. It felt like we were weightless," Bowden said. "It was scary. I feel like I'm a pretty tough guy. But, this storm, it made me shake uncontrollably."

North Dakota Gov. Doug Burgum and Lt. Gov. Brent Sanford, a Watford City native, visited the affected areas on Tuesday, and said that more than 150 people were displaced by the storm.

“The extent of the damage here is devastating and mind-boggling, with RVs utterly flattened and destroyed. Our thoughts and prayers are with those injured and displaced by this tornado,” Sanford said in a statement. “Fortunately, the community of Watford City is doing an amazing job offering assistance, providing food and water and finding shelter for those displaced. It will take a massive effort to clean up and recover from this tornado, and the state stands ready to help any way we can.”

In northeastern Montana, officials said a storm with estimated wind speeds of over 100 mph tore through part of a town Monday night. Sheridan County Sheriff Heidi Williamson said a microburst with speeds up to 118 mph destroyed at least nine small airplanes at the airport in Plentywood. No injuries were reported, but the storm uprooted trees, downed power lines and damaged other buildings.