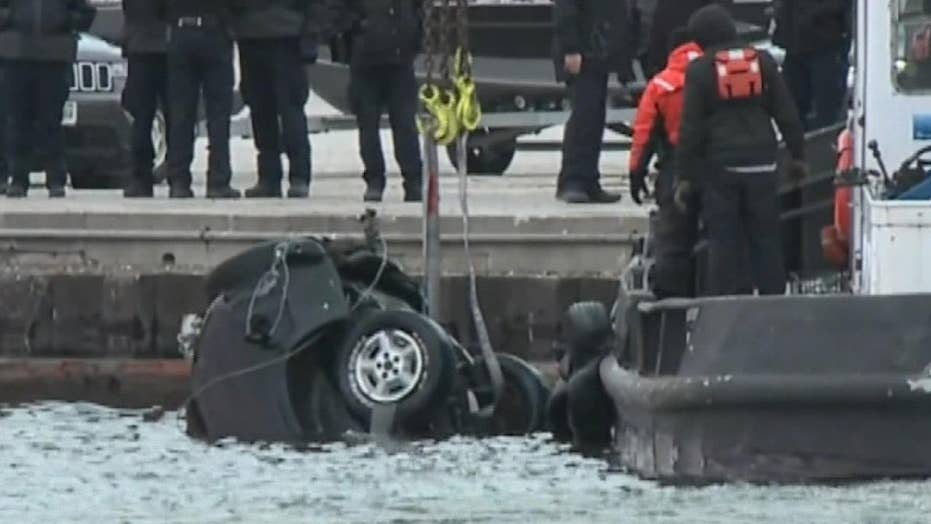 SUV plunges into frigid water after fleeing police, killing all three people inside

Emergency responders were unable to save the lives of a man, woman and little girl in an SUV that led police on a chase in Milwaukee before plunging into the Kinnickinnic River.

Three people, including a two-year-old girl, died after a car plunged into a river in Wisconsin during a high-speed pursuit on New Year's Eve, according to police.

The Milwaukee Police Department said on Twitter the pursuit began around 8:30 p.m. when a vehicle wanted in connection with several armed robberies was spotted.

Officers attempted to stop the vehicle, but it sped away.

Surveillance video released by the department shows the vehicle fleeing at a "high rate of speed" before the driver loses control and crashes into the Kinnickinnic River.

The vehicle crashed into the Kinnickinnic River after a chase through the streets of Milwaukee. (FOX6)

Divers from the Milwaukee Fire Department quickly responded and within minutes entered the water, where a 19-year-old woman was recovered.

"Despite lifesaving efforts she died on the scene," police said. "Rescue divers continued to search the immediate area of the river, but were unable to locate any other occupants of the vehicle. Due to eroding conditions, the search was discontinued after a significant amount of time."

The search resumed on New Year's Day when the bodies of a 29-year-old man and 2-year-old girl were located in the vehicle, which was extracted from the river.

Divers responded within minutes, but were unable to save anyone in the SUV. (FOX6)

Andy Ninnemann, who was walking near the river on New Year's Day, told FOX6 the whole incident is "a tragedy."

"Especially with the young life taken so quickly. It's sad to hear that. Now a kid involved that has lost their life, that can't be replaced," he told FOX6. "This kid has no future now. Now the family has got to suffer, saying 'Oh, my kid passed away,' that's sad. That's pretty sad to hear."

Milwaukee Police have not yet identified the three people killed in the crash and said that Wisconsin State Patrol is investigating the accident portion of the incident.