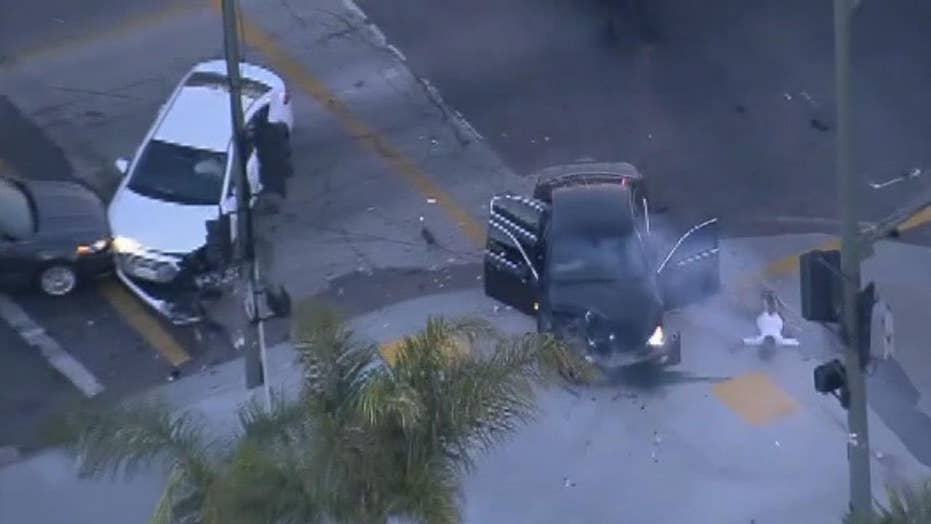 Police arrest driver and passengers of a vehicle that led them on a dangerous pursuit through Los Angeles and ended when they sped through a red light and crashed into an innocent driver who suffered minor injuries.

A police pursuit through neighborhoods in South Los Angeles on New Year's Day ended with a crash captured on camera and the arrests of three people.

The chase began after officers with the LAPD's Gang Unit pursued suspects who were believed to have a gun, according to FOX11.

Officers followed the vehicle down residential streets in the Crenshaw neighborhood as news helicopters filmed the drama from their perch overhead.

Since the chase took place in the afternoon on New Year's Day, low traffic on area roadways allowed the driver to reach a high rate of speed as the vehicle ignored traffic lights and signs.

The chase eventually came to an end when the suspect's black vehicle T-boned another car at an intersection, sending that car into another vehicle nearby.

Courtney Patterson, whose vehicle was hit at the end of the chase, told FOX11 she was "shooken up" but grateful she wasn't killed.

Three people from the vehicle involved in the case were taken into custody, according to FOX11. Additional information about the incident has not yet been released by police.