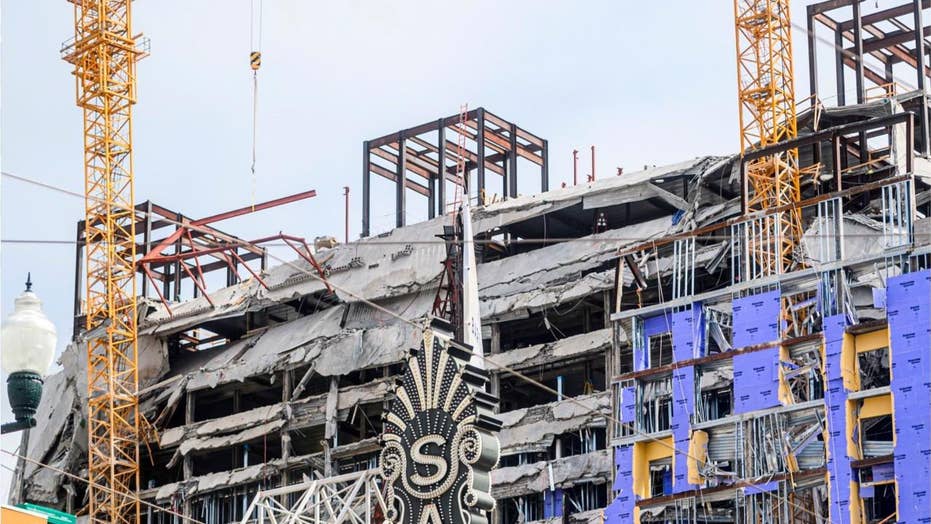 Three months after the Hard Rock Hotel collapsed in New Orleans, there are still bodies trapped in the rubble. One of the victim's legs were recently photographed dangling from the building after a tarp that was covering them blew away.

The legs of a dead construction worker who died months ago when the Hard Rock Hotel collapsed in New Orleans’ French Quarter could be seen Wednesday dangling off an upper story of the partially destroyed building, after a red tarp covering the site shifted in heavy winds.

The bodies of two of the three people killed – construction workers Quinnyon Wimberly, 36, and Jose Ponce Arreola, 63 – have remained trapped in the rubble since Oct. 10, when the upper concrete floors of the 18-story building collapsed, damaging cranes and sending metal debris raining onto streets. More than a dozen others also were injured.

Search-and-rescue efforts were pushed back for months amid concerns the building was not stable enough to safely remove the bodies. Developers stalled plans to implode the building in November, claiming the wide debris field could hit other buildings in the historic district.

“A tarp put in place to conceal the remains of one of the victims of the Hard Rock collapse has been shifted by the wind — exposing those remains. The condition of the building and the altitude above street level complicate efforts to replace the tarp, as they have prevented recovery thus far,” Mayor LaToya Cantrell wrote in a Facebook update.

“To be clear: capturing or sharing images of the victims in such a condition is irresponsible, it is indefensible, and it is not who we are as New Orleanians. Out of respect to the victims and their families, and in the name of basic common decency: we urge news outlets, residents, and social media users to have nothing to do with making a tragic situation needlessly worse,” the mayor continued.

Firefighters later were deployed to the building to place a new tarp over the deceased man after graphic photos taken by passersby circulated online, Fox 8 New Orleans reported.

“Firefighters are proceeding with extreme caution, and doing their best to make a bad situation better for the families that are suffering,” Timothy McConnell, the fire superintendent, said in a news conference, according to The New York Times.

New Orleans is preparing for its busiest tourist season — about 1 million visitors are expected to arrive for Mardi Gras, which falls on Feb. 25.  Cantrell, a Democrat, recently approved a plan for “controlled demolition” of the building to begin in March. A search-and-rescue team will then go in for the bodies.