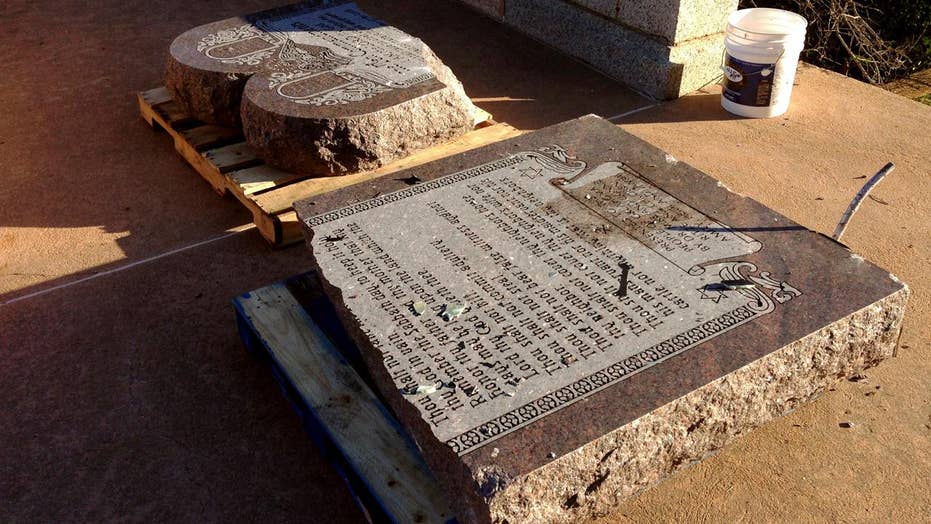 A New Mexico town is fighting back against two area residents who successfully sued it for erecting a Ten Commandments memorial, claiming it offended their religious beliefs.

Five years ago, the two residents took issue with the monument to biblical law being placed on the front lawn of Bloomfield’s city hall. Jane Felix and B.N. Coone, represented by the American Civil Liberties Union, sought to compel the city to remove the memorial because it offended their beliefs. A court filing by lawyers representing the city describes the two residents as "polytheistic Wiccans."

A district court ruled in their favor, finding that their claims of actual harm from the monument to be displayed were justified. Bloomfield City Hall appealed that decision. But the appeals court did not rule in the town’s favor.

The city of Bloomfield in New Mexico recently filed a petition with the U.S. Supreme Court to review their case, which involved opposition by two local practicing Wiccans who took issue with this Ten Commandments Monument being placed on the front lawn of City Hall. (Alliance Defending Freedom)

“We are asking for the court to make clear, for once and for all, religion’s role in the history of this country,” David Cortman, an ADF attorney, said to Fox News.

“Americans shouldn’t be forced to censor religion’s role in history simply to appease someone’s political agenda,” said Kevin Theriot, ADF senior counsel. “We hope the U.S. Supreme Court will take this case and affirm, as it recently did, that adults ‘often encounter speech they find disagreeable; and an Establishment Clause violation is not made out any time a person experiences a sense of affront from the expression of contrary religious views.’”

The city’s petition maintains that guidance is needed from the Supreme Court because various standards have been made to evaluate whether or not Ten Commandments monuments, like the one in Bloomfield, are permissible. The filing also asks the justices to clarify “whether individuals have standing to bring an establishment clause challenge simply because they are offended by a monument.”

It was in 2007 when a Bloomfield city council member motioned for the placement of the large Ten Commandments monument in front of city hall. Several years later, the project was approved and privately funded. By 2011, the city added a disclaimer next to the monument identifying the area as a public forum and invited petitions from the public for other historical monuments to be added to the location.

Soon after, Felix and Coone filed their lawsuit, claiming that the monument not only violated the First Amendment’s prohibition of a government endorsement of religion but also forced them to endure religious tenets that were not their own, claiming that they were forced to see it as they drove by city hall.

“Interestingly enough, the plaintiffs said that they were not offended by the mention of God in the other monuments,” the ADL’s Cortman said to Fox News.

Both District and Appelate Courts ruled in favor of the two witches, who claimed that the monument was the source of actual personal harm. (Google Maps)

Both Felix and Coone were not available for comment. The ACLU of New Mexico did not immediately respond to requests for comment.