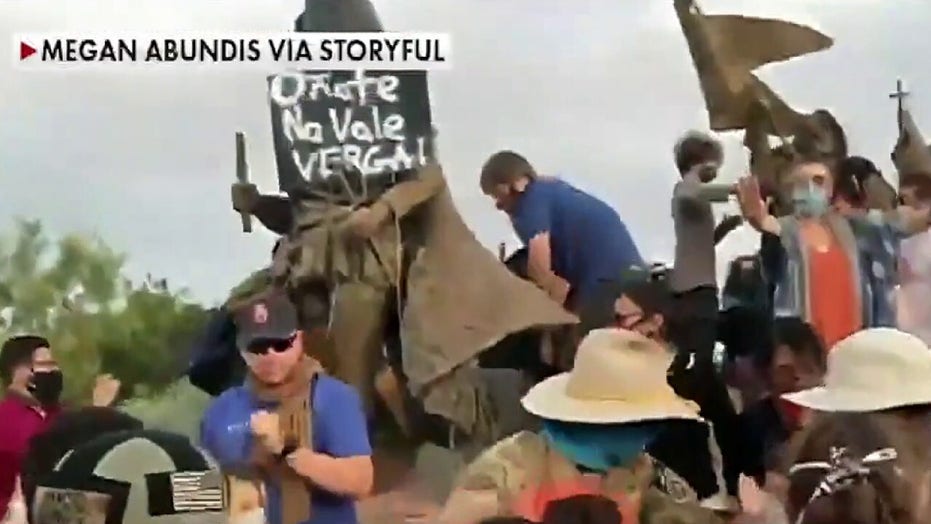 A man is shot in Albuquerque, New Mexico as protesters try to tear down a statue of a Spanish conquistador; William La Jeunesse reports.

Former Albuquerque city council candidate Steven Baca was charged Tuesday in a shooting that unfolded at a protest the day before, as videos and witness statements portray a chaotic scene before the gunfire rang out.

Baca, 31, was booked in the Metropolitan Detention Center and charged with aggravated battery with a deadly weapon with a firearm enhancement, according to a criminal complaint outlining the details of his arrest. The investigation was ongoing, however, as details of the protest continued to emerge.

A man was shot during the demonstration Monday in New Mexico, where some protesters had been trying to topple a bronze conquistador statue outside an Albuquerque museum, investigators said. The shooting took place amid heated tension between the protesters and the New Mexico Civil Guard, an armed civilian group that sought to protect the statue. The monument featured Spanish conquistador Juan de Oñate, The Albuquerque Journal reported.

The complaint stated that a bystander's cellphone footage showed Baca defending the statue, then leaving the area and heading "toward the street interacting with the crowd." Shortly after that, an undercover detective saw members of what appeared to be the protest group chasing after Baca. Baca then tried to back away while using pepper spray to create distance between himself and the crowd, the witness said.

"The group appeared to maliciously pursue Steven, with several of the crowd's individuals striking Steven's body with their hands and legs," the report stated.

He allegedly was hit with a longboard by one of the protesters, while he tried to protect his head and body. When a second protester picked up the longboard and swung it at Steven's head a second time, that's when gunshots were heard, according to the complaint.

Baca was seen on video firing several shots at a man later identified as Scott Williams. Williams suffered multiple wounds to his torso and was rushed to a nearby hospital, where he was listed in critical but stable condition, according to police. Investigators were not able to interview him right away, due to his injuries.

Baca also was taken to the hospital where doctors medically cleared him, before he reportedly declined to give a statement to law enforcement.

Video obtained by The Journal showed a man, who appeared to be Baca, moving through the crowd of protesters and throwing one of them onto the ground, shortly before the shooting took place.

However, another video obtained by a KOB4 reporter appeared to support the details of the criminal complaint, as it showed a crowd of protesters chasing after Baca, yelling "get him," and "get his license plate," before tackling him to the ground.

One voice could be heard on camera warning the protester who allegedly hit Baca, that he was going to "kill" them. Shortly after the warning, four shots rang out in succession.

Mayor Tim Keller gave a news conference on Tuesday evening to address the shooting and almost immediately branded Baca as a racial agitator, whose actions were "unacceptable."

He claimed the protesters were "peacefully protesting against racism that has been ingrained so deeply within our system." 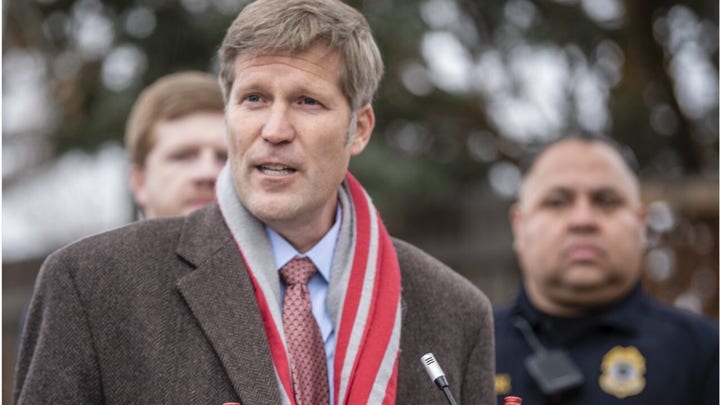 Keller, a Democrat, also said Williams was "in our prayers," before he called on the state legislature to amend New Mexico's constitution, with regard to firearm regulation.

"Because of our state Constitution, the city is limited to what we can do for guns," he said. "I want to remind folks that New Mexico is one of many western states where cities are not allowed to regulate weapons, and that includes weapons at protests."

Keller added, "We've tried to do what we can do. We've banned guns at community centers... and we've been tied up in federal court ever since that ban actually took place. So, we do know there's an opportunity here for our state legislature to take this up in the next session and try to change that constitutional amendment."

"We need action from the state legislature, up to and including state constitutional amendments if necessary, to give local communities including Albuquerque the power to proactively stop this kind of escalation, intimidation, and violence," he said.

Albuquerque Police Chief Mike Geier said the investigation was ongoing and any final decision about additional charges will be left to the district attorney. The case has been handed off to the State Police, who have continued to interview witnesses.

The sculpture that was attacked at the protest was "being removed today," in the interest of public safety, Keller added.