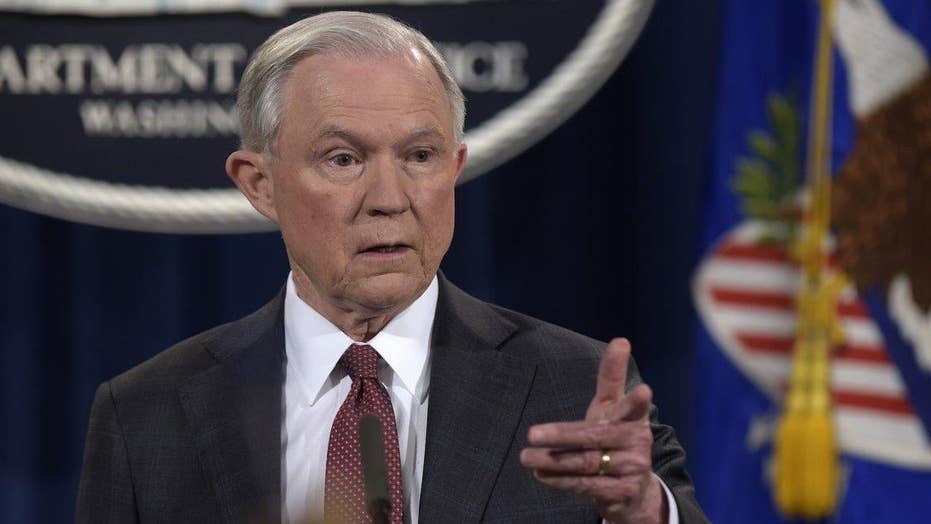 The recent arrest of 23 Mexican cartel operatives in New Mexico and West Texas is prime example of newly empowered local and federal law enforcement officials whose attitude reflects that of the Trump administration, some lawmen say.

The 16-month investigation targeted members of the Sinaloa Cartel, once headed by Joaquin “El Chapo” Guzman, who is currently in jail awaiting trial in Brooklyn Federal Court. Guzman once ran a major heroin and methamphetamine operation throughout the southwest.

Five additional suspects were also charged and remain at large. Some are suspected to have returned to Mexico.

At a press conference in Las Cruces, N.M. on Friday announcing the bust, Doña Ana County Sheriff Enrique “Kiki” Vigil essentially echoed Attorney General Jeff Sessions’ mantra on how to deal with criminal enterprises involving illegal immigrants. Sessions visited border towns and Long Island, New York, the past two weeks to announce that the administration will clamp down on MS-13, a violent street gang with Central American roots that is terrorizing many parts of the country.

“We’re going to make sure that you’re always looking over your shoulder,” Vigil said about dangerous Mexican drug cartels making their way into Texas. “We’re going to be knocking on your doors soon — it’s just a matter of time. We’re going to clean up our communities.”

Vigil told Fox News that while on the surface this may not seem like a major drug bust, it does follow a pattern used by major drug traffickers.

“They’ll bring amounts of this size across this border and store them in stash houses until it is large enough to move to other parts of the country,” Vigil said.

DRUG CARTELS IN MEXICO BEING TAKEN OVER BY RUTHLESS, BUT CHARMING, WOMEN

As a former U.S. Marshal in El Paso, Vigil said he is aware of how drug cartels are impacting the region.

“The cartels are very ingrained in New Mexico communities with cells and stash houses. We are a perfect spot since our county borders Mexico,” he said.

Officials believe the drugs were brought into the U.S. from nearby Ciudad Juarez, which is across the border from El Paso. Several interstate highways connect Juarez to Albuquerque, the state’s largest city and a key distribution point for the heroin that pollutes much of the Land of Enchantment.

Violence has surged in Juarez the past few years as the New Generation Jalisco Cartel is challenging the Sinaloa and Juarez Cartels for the lucrative drug trafficking route into U.S., or “plaza,” especially in the Juarez Valley southeast of El Paso, Texas, a long-held Sinaloa Cartel stronghold.

According to the U.S. State Department in Ciudad Juarez, there were 545 murders in 2016, an increase from the two previous years. There were 438 killings in 2014 and 312 in 2015. April has been a relatively peaceful month so far in Juarez.

El Diario de Juarez reports that there have been 25 murders, including three people killed this past Wednesday and Thursday. This figure is less than half of the 71 homicides for all of the month of March.  So far this year, there have been about 250 people murdered in the city.

Vigil said he is encouraged by the tone of the Trump administration, which has vowed support and funding to further these operations. But, he add, he doesn’t see the proposed border wall as a solution. He is looking forward to the 5,000 additional Border Patrol agents pledged by President Trump in one of his first executive orders.

“We need more boots on the ground because a wall will not solve illegal immigration or drug trafficking,” Vigil said. “We come across skeletons and groups in the desert often.”

He described one recent incident where deputies came across a group of 22 people in the desert, one of whom escaped from a prison in Ciudad Juarez and was wanted for a crime in the U.S.

Five suspects also listed in the indictment, including the suspected leader of the organization, Luis Angel Briseño-Lopez, a Mexican national who may be living in Cuidad Juárez, remain at large.