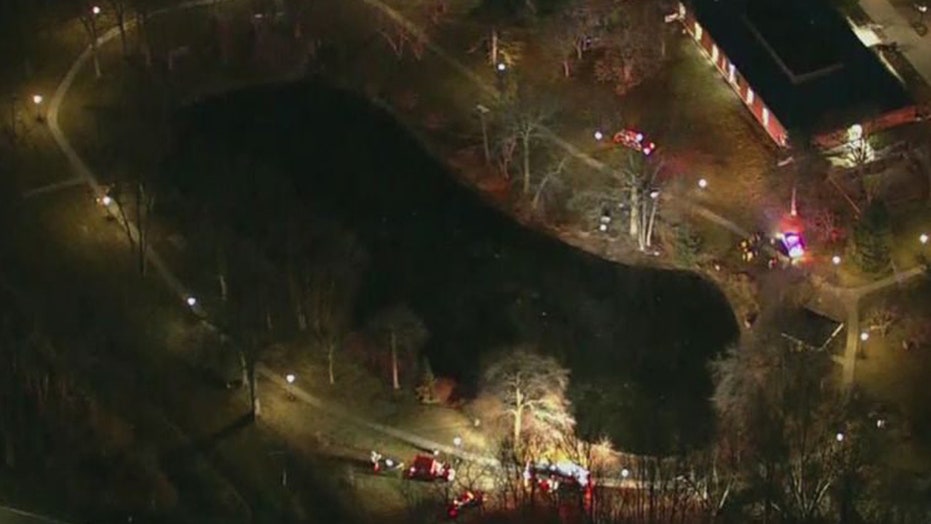 Authorities in New Jersey are warning about the dangers of icy ponds after a group of teens fell into chilly waters in two separate incidents on Wednesday, leaving two dead and others injured, including first responders who rushed to the scene.

The first incident happened shortly before 5 p.m. in East Brunswick, N.J., when a group of teens fell through the ice at a pond located just behind police headquarters.

The East Brunswick Police Department said in a news release that two of the boys in the group were able to get themselves out of the water, but a third remained in the pond.

Arriving officers formed a human chain in the pond in an effort to rescue the 13-year-old victim, but he slipped under the ice before they could reach him, police said.

Three teens fell through the ice on a pond in East Brunswick, N.J., on Wednesday, leaving one dead. (WNYW-TV)

All units from the East Brunswick Fire Department were dispatched to the pond and were able to recover the 13-year-old, who was pronounced dead at an area hospital.

The two incidents involving groups of teenagers falling through the ice on ponds happened a few hours and 20 miles apart. (WNYW-TV)

One other officer who was responding to the incident was involved in an accident and also transported to the hospital.

About two hours later and 20 miles away, first responders rushed to a pond in Carteret, where two teens also had fallen through the ice. The Carteret Fire Department said one of the teens was able to rescue himself, while emergency service personnel made "several unsuccessful attempts" to rescue the other teen.

After about an hour, the 15-year-old boy, later identified by Cartaret police as David Tillburg, was taken to an area hospital where he later died, officials said.

"Our thoughts and prayers are with him and his family during this most difficult time," Cartaret Mayor Dan Reiman said. "Our small community is saddened and shocked over this tragedy; we take solace in knowing that our emergency services responded and did all they could in an attempt to rescue him."

The other teenager is being treated at the hospital. There is no word on his condition, according to FOX5.

A photo that emerged after the teen's death obtained by WABC-TV showed Tillburg appearing to post photos to Snapchat of himself on ice before falling into the pond.

The New Jersey State Police Benevolent Association called the incidents a "tragic night" around the state.

"It has been a tragic night around the State with young people falling through ice," the group tweeted. "Some officers have been injured and hospitalized in heroic attempts to save lives. Pray for all families and communities tonight."