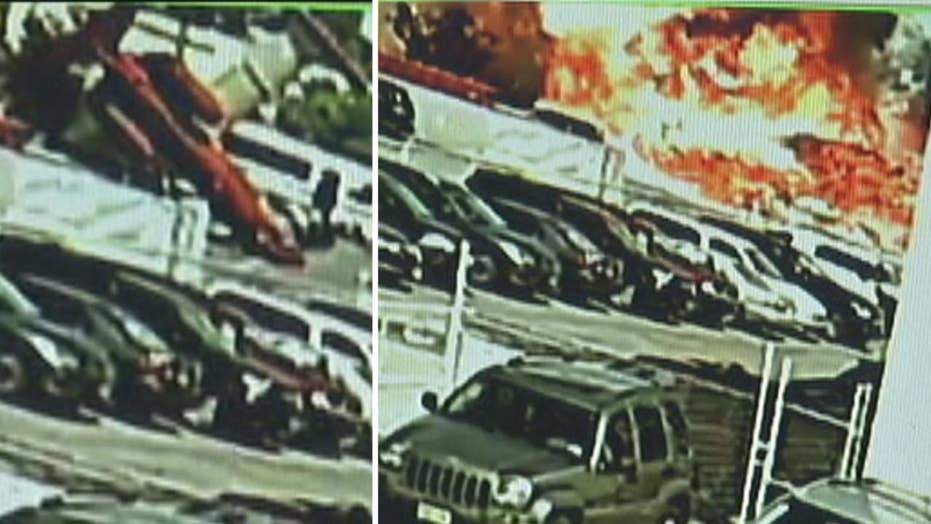 Moment of impact in deadly jet crash caught on camera

Federal investigators are visiting the site of a deadly plane crash near Teterboro Airport, just outside of New York City, Tuesday to determine what caused the jet to crash on Monday afternoon, killing two people.

New surveillance footage from a local business showed the moment the private aircraft hit the ground and instantly burst into flames.

The two crew members were killed when the Learjet 35 crash-crashed in an area of small warehouses and buildings in Carlstadt, N.J., just a quarter-mile from the airport’s runway, police said.

The plane was out of control before the crash, Jim Silliman with the National Transportation Safety Board said Tuesday afternoon, adding that investigators would look into strong winds as a possible factor.

Emergency responders spent more than an hour extingushing the fire, which police said torched cars in the parking lot. Two of the three buildings involved sustained fire damage, as well.

Mayor Craig Lahullier said employees had left work for the day at the time the jet crashed next to the town’s public works building.

“If this had happened 20 minutes earlier, people would have been at their cars,” Carlstadt spokesman Joe Orlando said. He added that pieces of melted engine could be seen in the wreckage, along with wheels and part of the fuselage.