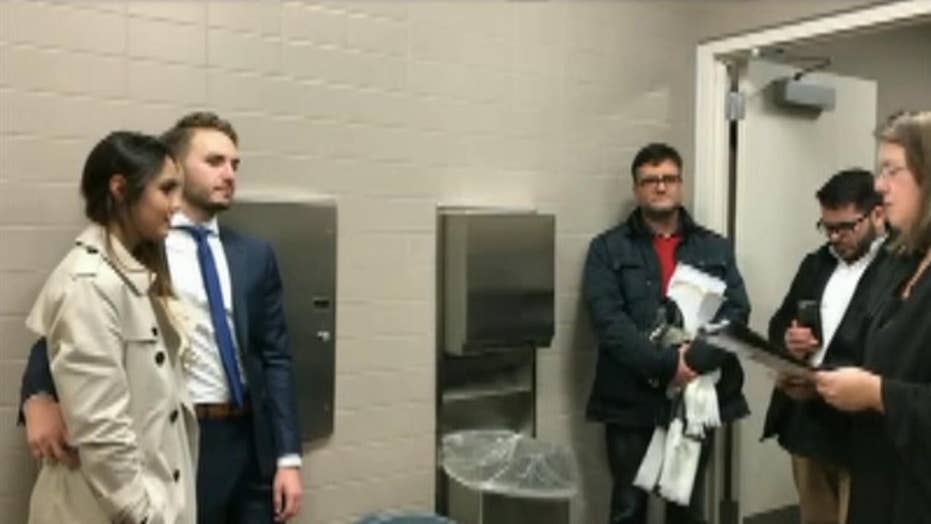 Brian and Maria Schulz tied the knot in the women’s bathroom after the groom’s mother had trouble breathing.

A New Jersey couple that didn’t want to flush away their wedding dreams when the groom’s mother fell ill opted for another venue in which to tie the knot: the bathroom.

Brian and Maria Schulz were set to get married at Monmouth County Courthouse on Wednesday when the groom’s mother thought she was having an asthma attack, the Monmouth County Sheriff’s Office said. Police officers administered oxygen to the mother in the women’s bathroom and waited for an ambulance to take her to the hospital.

“The couple was clearly upset about the mom and having to postpone their wedding, in which they would have to wait another 45 days for a new marriage license to be processed,” the sheriff’s office wrote on Facebook.

But Officer Leonard Maxfield had another idea -- have the wedding in the courthouse bathroom.

It wasn’t the ideal wedding venue the Schulzes were hoping to get, but it would prevent them from waiting another grueling month-and-a-half.

“The future Mr. and Mrs. were on board and so was the Hon. Judge Katie Gummer who performed the rather unusual ceremony,” the Facebook post said.

The wedding ceremony was captured on video with the groom, wearing a blue suit and tie, and the bride, wearing a trench coat, exchanging vows by the towel dispenser as Gummer stood across from them. The couple shared a kiss as family members watched.

The groom’s mother is reportedly “doing great” and has recovered.

"We are pleased to report that Mr. and Mrs. Schulz are doing great and so is mom," the MCSO wrote in the post. "They were touched that Sheriff’s Officers and the Hon. Judge Gummer went out of the way to make their day memorable and special."