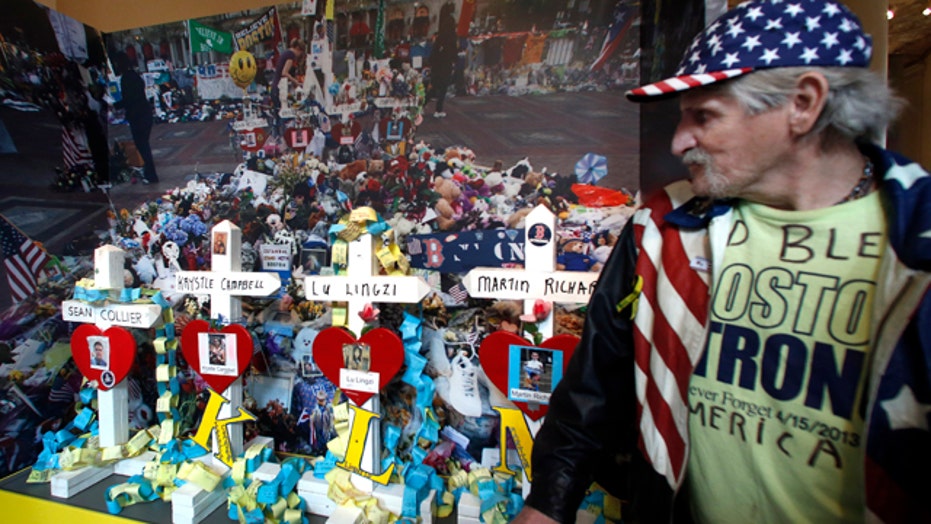 'Messages from the Marathon Memorial' goes on display

From the survivors, to Bostonians, to those who watched the carnage of the Boston Marathon bombing on televisions around the world, people sought a way to show their support for the victims and the city of Boston.

Mail poured in from across the globe. A memorial grew in the city's Copley Square, just past the finish line. People left heartfelt notes of sympathy and shared grief. Hundreds of running shoes were hung in tribute. Stuffed animals, hats and t-shirts surrounded a group of crosses bearing the names of the people who lost their lives in the twin blasts and the manhunt that followed.

The city sought to preserve the cherished outpouring. With a lot of hard work many of the items are now being shared in an exhibit at the Boston Public Library entitled 'Dear Boston: Messages from the Marathon Memorial.'

"There's so much grace and love in these messages," said Marta Crilly, an archivist working with the collection. It's housed within the City Archives, where more than 1,000 paper items are held as a treasured part of history.

"It just shows the strength of our community and our city that we were able to respond to a tragedy with such love and this memorial reflects that," Crilly said.

Many of the items are delicate and required special care.

"When we took down the entire memorial in Copley Square in late June, all of those items had been sitting out in the elements for two months so first they have to go to a facility where they were dried out, then they went to a fumigation bubble where they were soaked in Co2 so any organisms on them would die and wouldn't contaminate our stacks," said Crilly.

Beyond the many posters drawn by school children, more than 1800 pieces of condolence mail poured into then-Mayor Tom Menino's office from around the world. So many physical items-- from running shoes to large signs bearing thousands of signatures-- were left at the memorial site, that the city needed help coordinating them.

Boston-based Iron Mountain, a business specializing in document preservation and information management for corporations worldwide, volunteered the company's services and much needed storage space in a massive climate-controlled facility in Northborough, Massachusetts.

"It's a sacred space. When you come in here you truly treat it like it's a memorial, not just a set of objects," said Samantha Joseph, the Director of Corporate Responsibility and Sustainability for Iron Mountain. "We work really hard to make sure that where they're going to live is befitting to the importance that they have and the important role that they play in the history."

Shelves are filled with boxes, some created just for awkwardly shaped objects like a four foot teddy bear.  "We really wanted to make sure that every individual item was secure, was safe, was treated with love and care and respectful of the importance it had."

At both the City Archives and Iron Mountain, many of the people working with the items are from Massachusetts and have strong ties to Boston. Joseph ran the Boston Marathon in 2012, the year prior to the bombing, and vividly remembers crossing the finish line.

"I think about what I want my kids to know about this event and this tragedy, not only that it happened but the community was full of love, and that the world showed up to support the city of Boston and I think we're all really proud to make sure that that story is told," said Joseph.

The exhibit will be on display at the Boston Public Library through May 11th.

Letters received are being digitized and will be part of an online archive so people unable to see the exhibit in person will be able to experience it from afar.